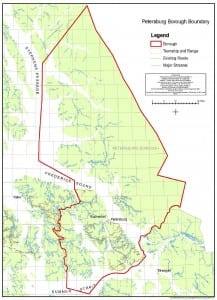 Petersburg’s plan to form a borough meets state standards. That’s according to a preliminary report by staff for the Alaska Local Boundary Commission. The report recommends the commission approve the borough petition mostly as presented. That’s with the exception of a boundary change that would leave Tracy Arm and the Whiting River out of the most northeast portion of Petersburg’s proposed borough, adjacent to Juneau. Petersburg Mayor Al Dwyer calls that “Good News”:

“Actually it is what we expected would happen. In other words tracy arm went to Juneau because they do have more documentable activity there. So that was one of the concessions we were willing to make anyway. But we were never really asked to. They just decided. And we’re very happy with their decision,” Dwyer said.

The commission’s staff recommendation would leave most of Petersburg’s proposed borough territory intact. The City and Borough of Juneau has a competing petition now pending to annex nearly half that territory. 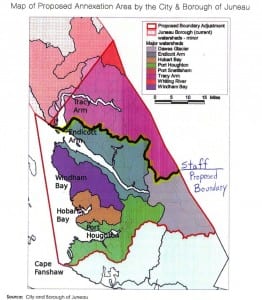 The disputed area is on the mainland and includes Holkum, Windham and Hobart Bays as well as Port Houghton and Cape Fanshaw. Both communities claim current and historic ties to the largely undeveloped lands and waterways. Juneau will stay involved in the issue as the process continues, according to Mayor Bruce Bothello:

“Our preliminary reaction is that it appears that the staff has not given any weight to the information we provided about juneaus historic use to areas to and including Hobart bay and that’s an issue of concern to us of course,” said Bothello

The Petersburg Borough would encompass an area roughly a hundred times the size of its current city limits. It would include the small, neighboring city of Kupreanof, which has opposed the plan along with many other outlying residents.

The public has a month to make more comments before the boundary commission staff drafts its final recommendations. The Commission itself is slated hold a hearing in late may before it decides whether to allow the Petersburg’s petition to move ahead.

We’ll have more on this story tomorrow afternoon.