The U.S. Forest Service late last month upheld the agency’s decision on a timber sale on Kupreanof Island near Petersburg. Four different administrative appeals were filed over the decision to log and build roads on the Lindenberg Penninsula.

For iFriendly audio, click here:
The Tonka Timber Sale decision authorizes logging up to 38.5 million board feet of timber on over two thousand acres of Kupreanof’s Lindenberg Penninsula across the Wrangell Narrows from Petersburg. The sale would mean construction of more than one and a half miles of new road, as well as seven and a half miles of temporary road along with a three to five acre sort yard. The harvest would happen on the Tonka road system in an area that’s already seen cutting in the past. 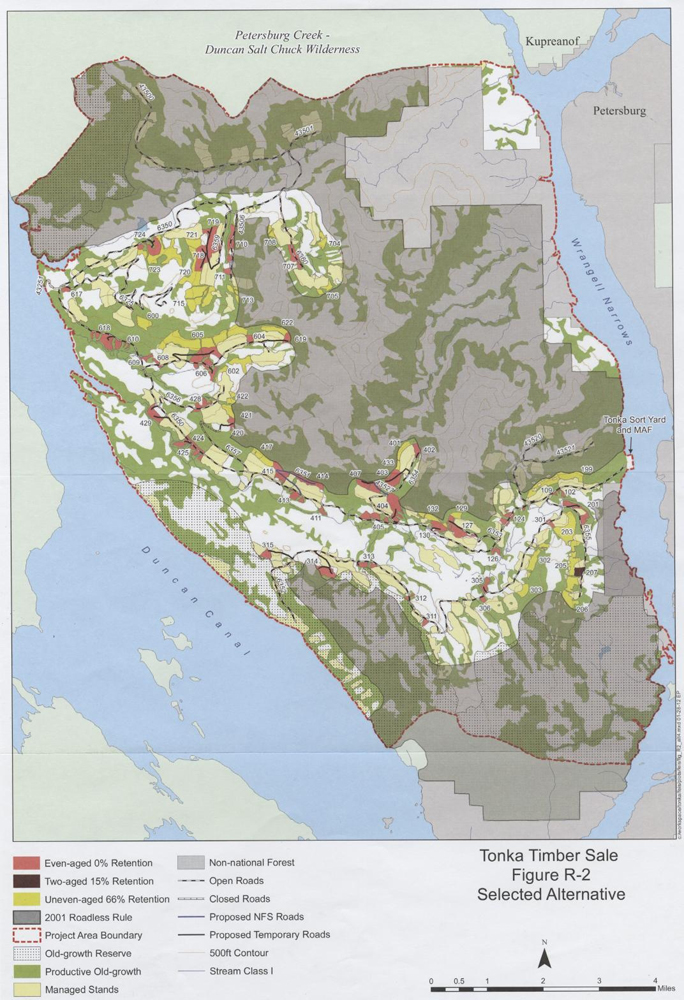 Regional forester Beth Pendleton on July 23rd affirmed the forest supervisor’s decision to go forward with the timber harvest. Ray Massey, spokesperson for the Forest Service’s Alaska Region, said the sale was designed to use the existing road system on Kupreanof and the proximity of the sale to Petersburg was a big issue as well. “Because we know it will support direct and indirect employment by supplying personnel, goods and services to the people that are actually working the timber. The area have been very attractive in the past to other purchasers because it has had successful timber sales from the project in the area in the past,” Massey said. “So we know it is a known producer, it was a money maker for other timber sales so we expect the same and that’s also one of the reasons for how this sale was put together.”

Logs from the sale are expected to be put on barges and shipped to a sawmill, or put in the water and rafted to another location. That’s been part of the controversy of this sale. The Forest Service has applied for and received state permits for log raft storage at Alexander Bay, also known as the pothole. Local crabbers are concerned about log debris damaging crab habitat and the exclusion of fishermen from the bay. Two of the appeals on the sale noted that concern.

Massey said the regional forester directed the agency on the Tongass to review issues raised during permitting with the state’s Department of Natural Resources and Department of Environmental Conservation. “And they needed to determine whether the results of the analysis the state conducted of the effects there in Alexander Bay for log storage is consistent with our analysis completed for the sale,” he added. That work needs to happen before the timber can be offered for sale. Barging and timber companies say use of the pothole is necessary to get log rafts through the strong tidal currents of the Wrangell Narrows.

The four appeals faulted the depth of the forest service’s environmental analysis and raised concerns the agency’s consideration of deer habitat, climate change and timber economics among other issues. One of the appeals was filed by five environmental organizations. They asked for the project to be cancelled saying the agency’s environmental review for the logging does not meet requirements of federal law.

Bruce Baker is a board member with the Greater Southeast Alaska Conservation Community, one of the appellants. He said the group is disappointed with the decision. “The level of analysis provided in the final EIS, environmental impact statement, was inadequate,” Baker said. “It simply isn’t the detailed statement that the National Environmental Policy Act requires a federal agency like the forest service to come up with. They didn’t basically review the environmental impacts with the consideration to the fullest extent possible that the law requires.”

Other appeals came from local residents Dave Randrup and Dave Beebe and one came from a man in Idaho. The forest service did not consider Randrup’s appeal – the agency says he did not submit the appeal to the proper place during the 45-day appeal period.

Petersburg’s city council voted to support the timber sale last December, noting concerns over deer habitat and log storage at the Pothole. The timber harvest is expected to create over 150 jobs. Viking Lumber of Klawock has logged in the area in the past and could be the only bidder for a large sale from Tonka. Barring any legal challenges, the first sale from the Tonka decision could be offered as soon as this fall.
To view a video of the a drive along the Tonka road system, click here: