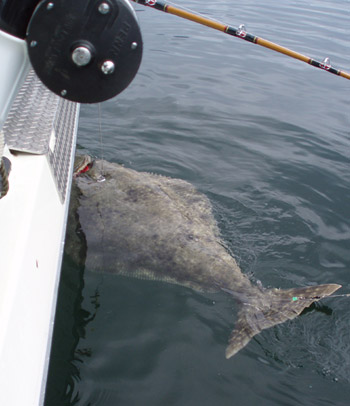 Representatives from the southeast charter and commercial fishing industries are disappointed with a catch sharing plan for halibut recommended by the North Pacific Fisheries Management Council earlier this month. The rules could bring changes to the size and number of flatfish charter-boat clients are allowed to keep in future years.

The Southeast charter fleet has been operating under a guideline harvest level, which is a desired target of halibut caught each year. For many years, charter boats have exceeded that GHL. it’s a very different system from the hard catch limits set each year for the commercial fleet. That would change under the catch share plan which sets a combined commercial and charter catch limit.

The recommendation was one of several alternatives considered by the North Pacific Council this month. Heath Hilyard is executive director of Southeast Alaska Guides Organization. He said he’s disappointed with the allocation set for the charter fleet in Southeast, also known as area 2C. “When you look at where we were actually under the GHL for 2012 and where we would have been had we been fishing under the CSP under the alternative 3 that we got I mean it was a very sizable loss of allocation. Somewhere in the neighborhood of 300, 310-thousand pounds,” Hilyard said.

The catch share plan has a sliding scale to allocate halibut between the commercial and charter industries depending on the combined catch limit. Anywhere up to five million pounds, the charter fleet would get 18.3 percent. With a catch limit between five million and five point 755 million pounds, the charter fleet would have a set allocation of 915-thousand pounds. Anything over that amount and the charter fleet gets just under 16 percent of the Southeast catch. There’s a different sliding scale for area 3A in the central Gulf. 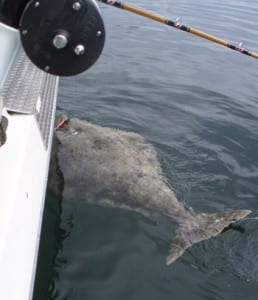 Southeast’s charter fleet has seen restrictions on the size of fish clients can keep over the past two years as federal fishery managers tried to keep the overall catch within a guideline harvest level. Clients have also been limited to one fish a day. Those kind of management measures could continue under the catch share plan, as fishery managers try to keep the charter catch at or below the allocation. In recommending the plan, the council expressed the intention to include public input and allow flexibility for management measures.

“We are pleased that that 2012 approach, that management flexibility component remained in there, that was something we did ask for,” Hilyard said. “What happens is, when you get down to a certain level of allocation, flexible or no, it becomes very difficult to find an appropriate management measure that will keep us under that allocation.”

There’s also a measure to allow charter captains to lease quota share from the commercial fleet to provide more fishing opportunity for their clients.

The region’s commercial fleet saw its first small increase in catch limits  this year, after years of decline and a decrease of 80 percent from peak catches less than a decade ago. Commercial interests have been pushing the council to adopt more controls over the charter fleet’s catch. The council selected a preferred alternative for a catch share plan in 2008 and has been analyzing that decision and taking input before this year’s recommendation.

Linda Behnken is director of the Alaska Longline Fishermen’s Association and president of the Halibut Coalition, both commercial industry groups. “Well we were disappointed that the council chose to re-allocate more quota from the commercial to the charter sector, relative to the action the council had taken in 2008, or relative to where the allocations were set when the GHL was initially set,” Behnken said. “But that said, there’s some important components of the catch share plan that we are eager to see move ahead. We’re very eager to see this issue resolved and some stability provided to all sectors of the halibut industry.”

Behnken noted it’s important that the charter catch goes up and down along with halibut abundance. “The catch share plan ties both sectors to the same index of abundance. So from here on out, as halibut stocks fluctuate, the commercial and charter allocations would fluctuate proportional to abundance which has not been the case in the past,” she said. “The commercial fleet has taken a much bigger cut as abundance dropped than the charter fleet.”

Behnken liked the catch share plan’s separate accountability for waste that occurs in the two fisheries. She thought there is some interest among the commercial fleet in leasing quota share to the charter boats. However, Hilyard with Southeast Alaska Guides thought many charter captains are not interested in that option.

The catch share plan will not go into effect until 2014 at the earliest. That will leave at least one more year with Southeast’s charter fleet operating under a guideline harvest level and restrictions similar to those in place this past year.

The council action is a recommendation to the Secretary of Commerce. Based on that decision, the National Marine Fisheries Service will develop a proposed rule and allow for public comment on that rule, before implementing any changes.