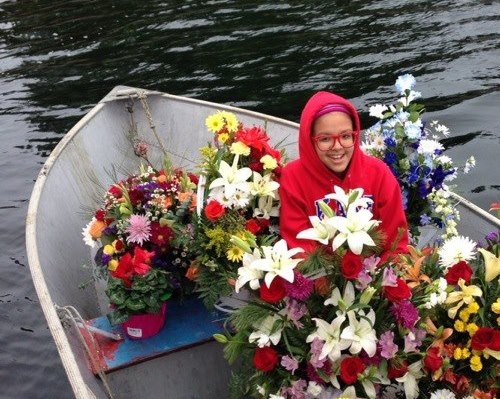 Candlelight vigils in memory of 13-year-old Mackenzie Howard are planned across the region tonight (2/8) as the investigation continues into her death. The vigils begin at 6 p.m. in most places. In Kake, mourners will gather at the Old Grade School. The Salvation Army Church in Petersburg is also holding a vigil. In Juneau, they’ll gather at Sealaska Plaza. The Sitka event is planned at the Salvation Army, on Sawmill Creek Road near the roundabout.

Family members, meanwhile, remember Mackenzie as an energetic young girl, with a bright smile and a love for basketball. KCAW’s Ed Ronco reports.

Basketball runs in Mackenzie Howard’s family. Her mother, Marla Howard, plays the game, and her father, Kip Howard, is a veteran of Southeast Alaska’s annual Gold Medal tournament. He says his daughter wanted to follow in those footsteps.

“She says, ‘Mom, you’re a baller, and my Dad’s a baller. So that must mean I’m going to be a super baller,’” Kip Howard said Thursday. “That was a joy to hear from her.”

At 13, Mackenzie was looking forward to the day she’d be able to play on the JV or varsity squads for Kake High School. And her dad says she took an interest in college basketball, too. Mackenzie’s inspiration was Brittney Griner, a 6′ 8″ senior who plays for Baylor.

“She enjoyed when she got to watch her play,” he said, “and then she would run downstairs and make a pose, and say ‘Brittney Griner!’ She was dreaming of going to Baylor University to be the next Brittney Griner.” 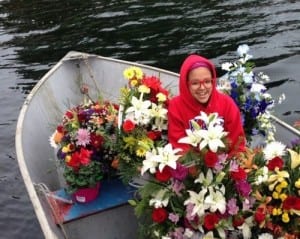 Mackenzie Howard’s father, Kip, says this is one of his favorite photos of his daughter, whose death Tuesday is being investigated as a homicide. It was taken this week, as the 13-year-old helped load flowers into a skiff for the memorial service of Clarence Jackson Sr., a respected Kake elder who died last week. (Photo provided by family)

On a road trip to Klawock, Mackenzie played on a team of all boys, against another team of all boys. He told her that it would make her better, and he says she bought into it. Not that it was always easy to watch her take that advice.

“I was sitting on the bench, and she was playing defense, I think, and the kid ran her over, and then stepped on her and trampled on her,” Kip Howard said. “My first reaction was, I jumped off the bench, and I took two steps toward the court, and then I stopped. I looked back at my wife, and I told her, ‘These bleachers need seatbelts.’ And my baby got right up off the floor and continued playing as hard as she was.”

Those good memories are what Kip Howard says he and his family will hold onto as they wait for answers to their questions about what happened to her. The night she didn’t come home, Kip Howard grabbed a handheld floodlight and went searching.

“That was the most terrible feeling I’ve had,” he said. “And then I got the call.”

The Howard family is well-known in Kake, a city of about 600 people some 40 miles northwest of Petersburg. Kip Howard is the fire chief and captains the city’s search-and-rescue boat. He says because Kake is a close-knit community, the tragedy of Mackenzie’s death reverberates throughout the city.

“My mom is still alive down south, and I have several sisters,” he said. “But since I’ve been here in Kake, the folks here have been my mother, my grandmothers, my sisters, my brothers, my uncles, my nephews. This is my family.”

Mackenzie had several siblings – three brothers and five sisters. Many family members traveled back to Kake upon hearing the news. Condolences have also poured in from throughout the community, the Alaskan panhandle, and friends across the country.

“Too many to respond to,” Kip Howard said. “All I could think of was ‘Thank you. Thank you.’”