State and federal officials say they are looking at a variety of options for improving transportation to and from the small village of Kake, a community of about 600 people on northwest Kupreanof Island. The effort was prompted by the state’s plan for a road and ferry crossing to connect Kake and Petersburg. However, now that the environmental study is getting underway, the Federal Highway Administration and the Alaska Department of Transportation are no longer calling it a road project. Rather, they say it’s an access project. As Matt Lichtenstein reports, the agencies held a meeting to gather initial public input in Petersburg last week: For mobile-friendly audio, click here.

A view of the Kake waterfront, KFSK file photo

It was an informal, three-hour open house at the Alaska Native Brotherhood hall. Over the course of the evening, roughly fifteen to twenty area residents stopped by, checked out the maps, and chatted individually with government planners and their consultants. It was the state’s plans for a road connection between Petersburg and Kake that got this ball rolling. However, the project involves some federal money and would cross federal lands, so the Federal Highway Administration is in charge of the Environmental Impact Statement. The EIS is a key requirement of the National Environmental Policy Act or NEPA. And Federal Highways Project Manager Michael Traffalis was careful to point out that the scope would not be limited to just a road.

“When the federal government was asked to come in and study the project, we wanted to take a step back and we wanted to rename it Kake Access namely because to identify what are the needs for Kake. Do they have Transportation issues now? We don’t know. That’s why we’re out here in a scoping process,” Traffalis said.

The agency will eventually come up with what’s called a Purpose and Need Statement for the project and develop a set of options to meet that need.

There were maps spread out on the tables displaying the preliminary alternatives including options for building roads, increasing ferry service or some combination of the two. The maps showed four potential routes for a road, all of which would cross Tongass Forest Lands and require shuttle ferries to connect Kake to other islands. 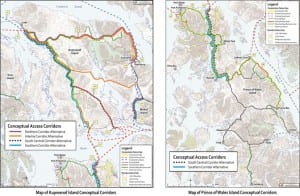 Map to the left shows potential routes out of Kake. Map on the right shows continuation of the routes headed south.

One of those options is a 45-mile road along the north end of Kupreanof. That’s been the preferred choice for the Alaska Department of Transportation, which secured 40 million dollars in legislative funding for a one-lane gravel road last year. Half the distance would require new construction and the other half would upgrade logging roads. The appropriation didn’t include money for the ferry crossing that would be needed to reach Petersburg.

However, Traffalis was not ready to say at this point whether or not that northern route, that alignment, would wind up as one of the alternatives in the Environmental Impact Statement.

“If that alignment meets the purpose and need that we develop and then through the public process then that could be potentially an alignment that comes forward,” he said.

In its legislative funding request and on its website, Alaska DOT proposed a road on the north end of Kupreanof to improve transportation for Kake and to help reduce maintenance costs for a potential electrical intertie to Petersburg. Consultants for the US Forest service are conducting a completely separate EIS for the Petersburg to Kake intertie. Traffalis said the route that’s chosen for that powerline could affect the Kake Access EIS but they are independent projects.

“The intertie can be built with or without a road,” Traffalis explained, “The road can be built with or without an intertie. There are some, I’ll say, common corridors, alignments further down. We don’t know if we’re on the same alignment but we have other potential alternatives, preliminary alternatives, other potential corridors that I believe aren’t being studied in the intertie right now. And so, for our EIS, we’re going to be looking at the intertie project in the cumulative effects section of our document. So, if the intertie decides to build on alignment x and we decide to build on alignment Y, we have to look at the combined effects to both projects and assess that in our environmental document”

However, the northern route could mean putting a road, power-line and ferry terminal in the small, roadless community of Kupreanof. The city of about 30 people has passed a resolution opposing it. That’s one of the reasons the northern route has been controversial in the Petersburg area, where some residents have also raised concerns over impacts on the view shed and nearby Petersburg creek among other issues.

“My community right now is hoping for the Tonka route, the southern route and if that is not an option by and by, then we’d like a route that does not come into our city limits. That’s what we’re hoping for,” said Kupreanof Mayor Dana Thyness, who was among those who stopped by the open-house.

Part of the City of Kupreanof, across the Wrangell Narrows from Petersburg. KFSK file.

The maps showed two other potential roads heading from Kake to Totem and Kah Sheets Bays on Southern Kupreanof Island. From there, travelers would link up with ferry connections to the Prince of Wales, Mitkof or Wrangell Island road systems.

“I see some of advantages to some of the new maps they brought around this time, especially with the southern route connections,” said Petersburg resident Bill Tremblay, who was hopeful planners could find a workable alternative to the Northern route, “I think there may be some possibilities with a lot of that without having to impact the city of kupreanof with a direct road into their community.”

The Federal Highway Administration’s Traffalis said his agency was very aware of Kupreanof’s concerns and planned to have future outreach and discussions with the community.

“And if the northern alignment is selected for study, we want to sit down with them and identify all the potentials of where that ferry terminal would be because we understand it’s going to be a high impact on their community. It’s a high impact on Petersburg and we want to make the right decisions,” Traffalis said.

The Alaska DOT has, for years, pushed for a road on the northern route. At the time of this meeting, the agency’s website still said, “the northern corridor across Kupreanof Island is the most direct route and as such is currently the State’s preferred route.”

But during the meeting, Regional Transportation Planner Andy Hughes asserted that his agency was staring fresh now that the environmental study was getting underway:

“It’s our charge to identify what the needs are and to address those needs……..whether that’s addressed with an alternative that consists of a ferry connection, an air connection, or road. And at this point in the process, we do not have a preferred alternative,” Hughes said.

The DOT is working with the federal government on the EIS, but the feds will ultimately decide whether a road or some other option can be built.

Federal Highways is the lead agency that will make that decision according to Project Manager Traffalis, but he says the Forest Service will have a say as well.

“We would seek concurrence from them to go forward if we had a build option on the Tongass,” he said.

And since a road would invariably affect wetlands, it would also require permitting from the US Army Corps of Engineers.

Federal Highways had planned to hold a meeting in Kake the following day but ended up postponing it. While the agency is focused on transportation for this study, getting access to cheaper hydro-electric power has long been the top priority for the Kake. As far as the transportation access project, Mayor Henrich Kadake would prefer a road that could be used to maintain the intertie.

“Right now, you know I don’t know how far they want to go with it but I am really looking for action just so that our intertie can go alongside it and where we don’t have to pay so much for maintenance of it. And if we don’t have the access road, this could cost a lot of money. For five to six hundred people, I don’t think it’s feasible to use helicopter maintenance with an intertie,” Kadake said in a phone interview the following week.