Assembly to weigh-in against ADFG cuts

The Petersburg Borough Assembly will join fishing groups to speak out against proposed cuts to the Alaska Department of Fish and Game’s budget.

Petersburg Vessel Owners Association Director Brian Lynch told the assembly on Monday that a House Finance Subcommittee had recommended a 550 thousand dollar reduction from the Governor’s proposed budget for the Commercial Fisheries Division in Southeast. At a minimum, he said the decrease would impact port sampling programs which are used to help manage the region’s salmon fisheries. Lynch, who is a retired, state fishery manager, said spring king salmon trolling is especially at risk since it’s highly dependent on port sampling data.

“The department at this time doesn’t really know exactly what the total impacts will be but (they) likely will result in severe reductions in harvests or could eventually result in the complete closure of that fishery depending on how this goes. The spring troll fishery is generally a three to four million dollar fishery in ex-vessel value and about five-and-a-half million in first wholesale value. So, basically the effect on the Southeast economy of these cuts would basically save a dime but would lose a dollar,” said Lynch. 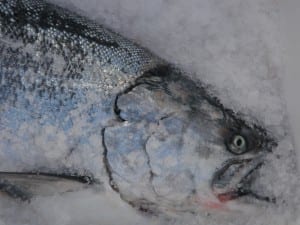 Lynch said the loss of port sampling funds would also directly affect the regions net fisheries and have ripple effects on management of other species. The money had been included in the Governor’s budget to make up for a loss of federal funding. Statewide, the subcommittee is recommending over a million and a half dollars in cuts to the department’s budget. There’s also a proposed reduction of a million dollars to the Alaska Seafood Marketing institute on the table.

Lynch didn’t ask for action, but the Assembly voted unanimously to send a letter to lawmakers and the Governor objecting to the potential cuts.

The House Finance Committee is taking public testimony on the operating Budget at various times this week. Petersburg area residents have an opportunity to comment between three and four on Wednesday.