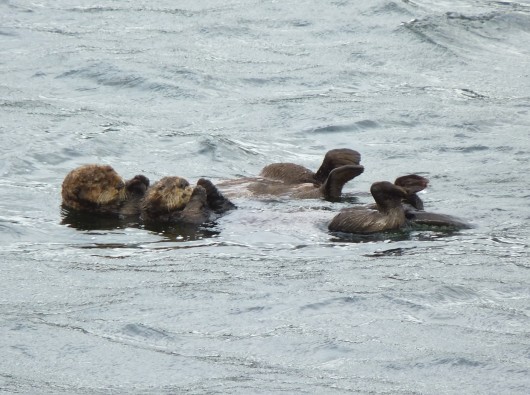 Fishermen harvesting Dungeness crab, geoduck clams and some other ocean-floor species have been coming up empty in recent years.

The reason is the rapid expansion of the sea otter population. The marine mammals mostly eat clams. But as they bring their voracious appetites into new areas, they clear out many of the shellfish sought by commercial, subsistence and personal-use divers and fishermen.

“So what we’re trying to do is come up with some assistance for the folks in the area that want to go out and harvest them to afford to be able to do so,” says Sitka Republican Senator Bert Stedman. He represents Kake, Prince of Wales Island and other coastal Southeast communities where otters have moved in.

He’s authored a bill that would give Alaska Natives – the only people who can legally hunt marine mammals – a $100 reward for each pelt they take.

“You’ve got your costs of your fuel and other items you need. Also, there’s tanning cost issues. We’re just trying to assist in the harvest,” he says.

Otters were once widespread along the West Coast from California out to the Aleutians. Russian and American hunters virtually wiped them out, except for a few remote areas.

They were reintroduced to Southeast about 50 years ago. Recent studies say their numbers have grown by as much as 12 percent a year in southern Southeast and 4 percent in the north.

“The Marine Mammal Protection Act prohibits any state from enforcing a law that affects the take of a marine mammal without first soliciting and receiving management authority for that species from the Secretary of the Interior,” Woods says.

The agency is working with Native hunters and craftspeople to better define the legal use of pelts. That could increase the overall harvest.

But Woods says Stedman’s legislation, and a similar bill in the House, are trumped by federal rules.

“We’ve got nothing to say about whether the law could be passed or not. But if the law were enforced, at least by an initial reading of the MMPA, that enforcement would be illegal,” he says.

Opposition to the bill is growing among some of the same organizations that campaigned against wolf control. They say otter population growth is a good thing.

She points out that otters eat sea urchins, which eat kelp, allowing coastal Southeast to return to its natural balance.

Brown says the alliance is talking with other groups, as well as legislators and attorneys, about the bounty bill’s impacts.

And what about the hunters?

“Some people think that it would be a good idea, in that it could offset the cost of hunting and tanning,” she says. “The others are worried about what the perception will be from different organizations, like Defenders of Wildlife. And we’re not sure how it would really work.

Sykes says local tribes have more influence on the issue than the regional Central Council.

Stedman, the Senate bill’s author, says it should be considered a first draft. He expects changes as it’s considered by the Legislature.

“Maybe we end up having this just a Southeast program and we exclude areas where the sea otters are elsewhere, out in the Aleutians and other places,” he says. “We’re not trying to eradicate, but we’re trying to control the growth.”

“And I recognize that there are a lot of citizens outside of Southeast Alaska that might just think this is a ghastly thing to do. But I can assure you we’re better prepared to take care of our own backyard than people in San Francisco and Florida are,” Stedman says.

His legislation comes before the Senate Resources Committee on March 13. The House version, introduced by Anchorage Republican Representative Charisse Millett, is not yet scheduled.