The initial cost estimate for a new Petersburg police station is much higher than officials had hoped. The borough’s architecture firm has put the total project price at just over nine million dollars. That would include design, permits, site work, construction, inspection, furnishings and contingencies.

According to Borough Manager Steve Giesbrecht, the assembly and design committee members had mixed opinions on what the building should cost but in general, he says, they were hoping it would be in the five to seven million dollar range.

Giesbrecht says Architect Wayne Jensen will talk about it with the Assembly Monday during a regular meeting Monday night:

“We’ve invited the design team to come in as well and they’re going to basically present this to the assembly and talk about what…..the alternatives are. I get a sense, from some of assembly members I’ve spoken to, that this is way too high and that we’re going to have to dramatically cut it and that’s a question the assembly’s going to have to answer…..Do they feel this is an acceptable price and we should move forward or do we need to go back to the drawing board? And I think there’s both opinions on the assembly and at least among the design team. So, we’re probably looking at some healthy discussion on Monday.” 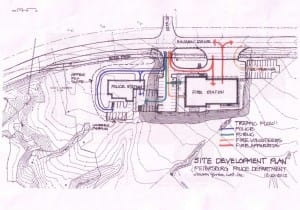 This conceptual design for the placement of Petersburg’s new Police Station was approved by the City Council in December.

The legislature, last year, gave Petersburg 350 thousand dollars for design work on the facility but the borough has not yet secured any construction funding. There was one-point-four million dollars in state money left over from the firehall project. The assembly is asking lawmakers to allow it to be used for the police station instead.