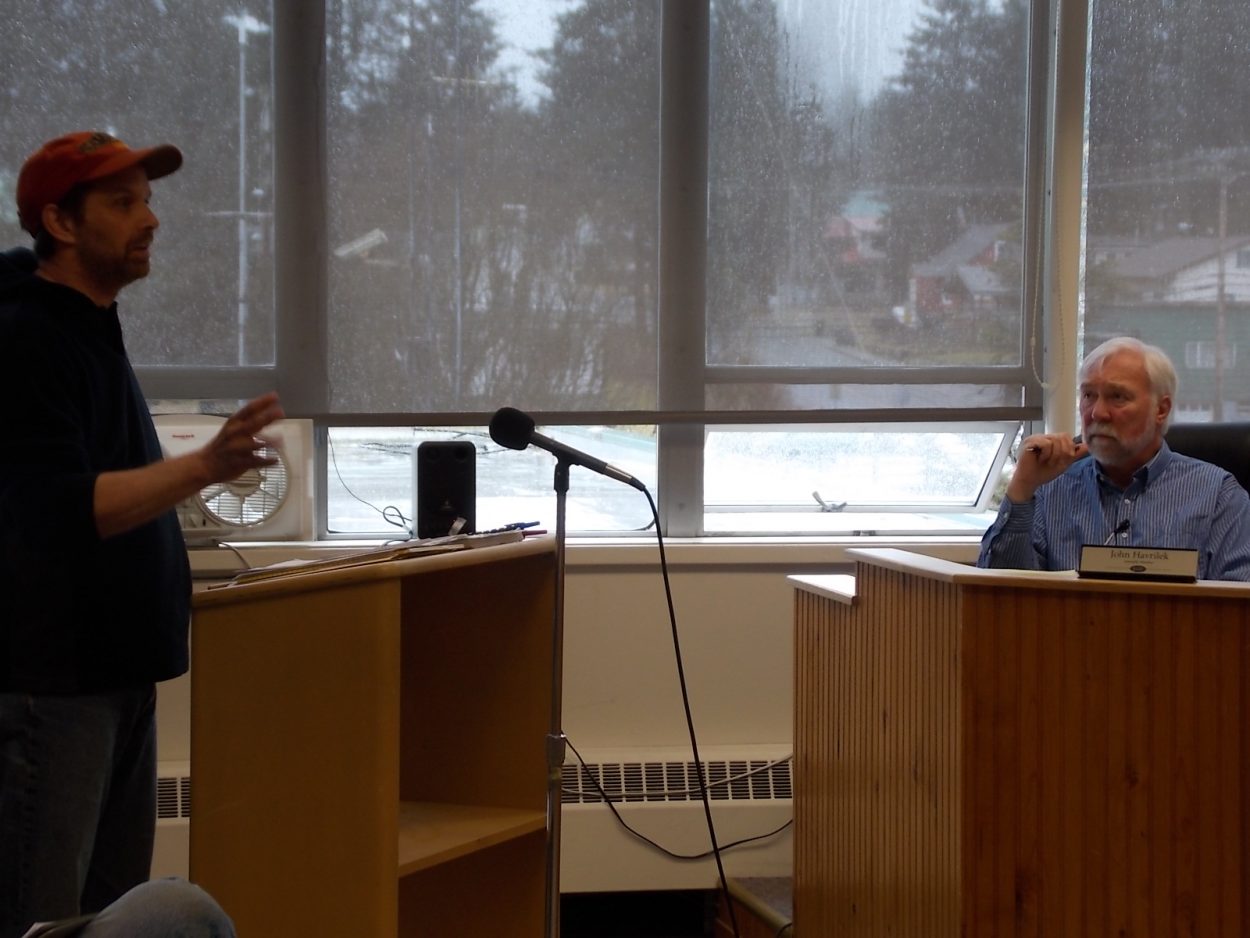 During nearly an hour of sworn testimony before the borough assembly Monday, a Petersburg builder took the borough to task over the North Harbor Reconstruction bid process.The borough last month announced its intention to award the seven million dollar contract to the low-bidder, Western Dock and Bridge of Ketchikan. In its appeal, Petersburg’s Tamico claimed the borough didn’t follow the proper procedures and should have included a bid preference for local residents, which is part of municipal code. That would have resulted in the contract going to Tamico.

After hearing both sides and consulting with the borough attorney, the assembly denied Tamico’s appeal and awarded the contract to the Ketchikan company.

Matt Lichtenstein has more on the story:

Tamico initially protested the borough’s decision in writing last month. The Petersburg firm submitted the second-lowest overall bid, roughly 100-thousand dollars more than Western Dock and Bridge. Petersburg’s Borough Manager issued a written response denying Tamico’s protest. So, Tamico Vice President Jim Martinsen took his appeal to Monday’s borough assembly meeting. Martinsen said protests over contracts of this size were not uncommon. For him, it was part of doing business and the stakes were high.

“Its just the nature of the beast. Its not me stomping my feet or anything like that. It’s just, there’s a limited number of contracts out there. Its like….lets say you got one fish that’s going to make your whole season and one boat is going to catch it. It’s there, its competitive,” he said. 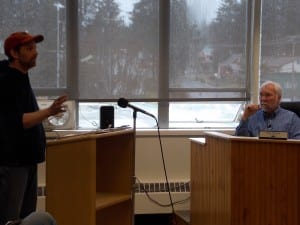 Jim Martinsen testifies before the borough assembly. Assemblyman John Havrilek is to the right.

A key factor for both Martinsen and the borough was that state funding requirements for this project call for the contracting process to be consistent with state procurement law. The law requires that contracts be awarded to the lowest bidder, “after an Alaska bidder preference of five percent.”

He testified and answered assembly questions for nearly an hour, maintaining that the borough had not followed the proper bid procedures under state and local law.

Among other things, he challenged the borough’s written notice that there would be no local bidder preference. That came out in an addendum four days before the bids were due and Martinsen argued that bidders should have been given more time to protest.

Also, he said the borough’s bid solicitation should have included the fact that there was an Alaska preference, “In the bid documents, this is going to have to state ‘this is bid under Alaska bid preferences’ It’s not something that the state says is inferred. You can’t infer Alaska bidder preference is going to apply to this job just because the funding is set there. You’ve got to say it in the bid documents and that’s very clear so that outside companies looking at it know there’s Alaska bidder preference on the table.”

Martinson also pointed out that the borough had prematurely awarded the contract to Western Dock and Bridge last month without giving the required seven days notice.

Borough officials acknowledged that problem last month, retracted the award, and put out a notice so that the award could be made this week. Borough Manager Steve Giesbrecht said that mistake had no bearing on the outcome of the award itself.

Giesbrect also gave sworn testimony to the assembly. He maintained that state funding conditions for the project did not allow for the local preference. Muncipal code says that residents shall be given a preference if their bid amount is not more than five percent over a non-resident’s bid. However, Giesbrecht pointed out that the code also allows Petersburg the leeway to drop that preference and contract with, “….whatever source is most advantageous to the city after considering all factors in the public interest.”

Giesbrecht laid out several of the factors he considered beyond the 100 thosuand dollar price difference in the two bids, “First a local bidder preference would have created a substantial liability risk to the Petersburg borough due to the departure from the transfer project agreement with the department of Transportation and Public Facilities. This is the state agency that deeded the harbor to Petersburg. It could have resulted in either a challenge by DOT&PF or by the low bidder resulting in delay of the project including the potential for loosing corps (US Army Corps of Engineers) support, the dredging process and/or the possibility of having to redo the permit procedure for this process.”

Giesbrecht emphasized that Tamico did not file a protest when the addendum about removing the local bid preference came out. He also noted that the local company did not attend a February, pre-bid meeting where city officials had earlier clarified the local bid issue with other contractors.

“Because the bid request went out without protest, it would expose the borough to liability if the award was now made contrary to the terms of the bid request which did not include a local bidder preference,” Giesbrecht told the assembly.

He stressed that awarding to the lowest responsible bidder was a fundamental requirement of the state’s procurement code, “Since both Western and Tamico are Alaska bidders and they were the two lowest bids, the deciding factor continues to be the lowest responsible bidder as outlined in the North Harbor bid specifications. Included in your packet is the bill of sale and the transfer project agreement for the South and Middle Harbor projects that show the same restriction and no local preference that was used in these projects. This is consistent, again, with how the North Harbor bid process was conducted.”

The city has contracted with both Tamico and Western Dock and Bridge in the past and Giesbrecht said he had never heard a complaint about either company’s performance. He said, to his knowledge, they both did quality work.

So, for the Assembly, the issue came down to one of law. Assemblyman John Havrilek asked Giesbrecht about the city’s legal liability on this issue, “Would we be open to litigation if we did not award this to Western dock?”

“That is our feeling. Yes,” Giesbrecht replied.

Havrilek continued, “And I know all of us are totally in favor of supporting our local contractors 100 percent. Is there a way, legally, we can award this to them without having a problem?

“Not that I’m aware of,” said Giesbrecht.

Considering the potential for litigation, the assembly ultimately held a closed-door executive session to consult with the borough attorney by teleconference before making a decision.

Afterwards, with no further comment, they voted unanimously to deny Tamico’s appeal and then to award the contract to Western Dock and Bridge.

Tamico’s Jim Martinsen says he is considering his options at this point.

Work on demolishing the old harbor is slated to get underway in late summer early fall, followed by dredging by the US Army Corps of Engineers.