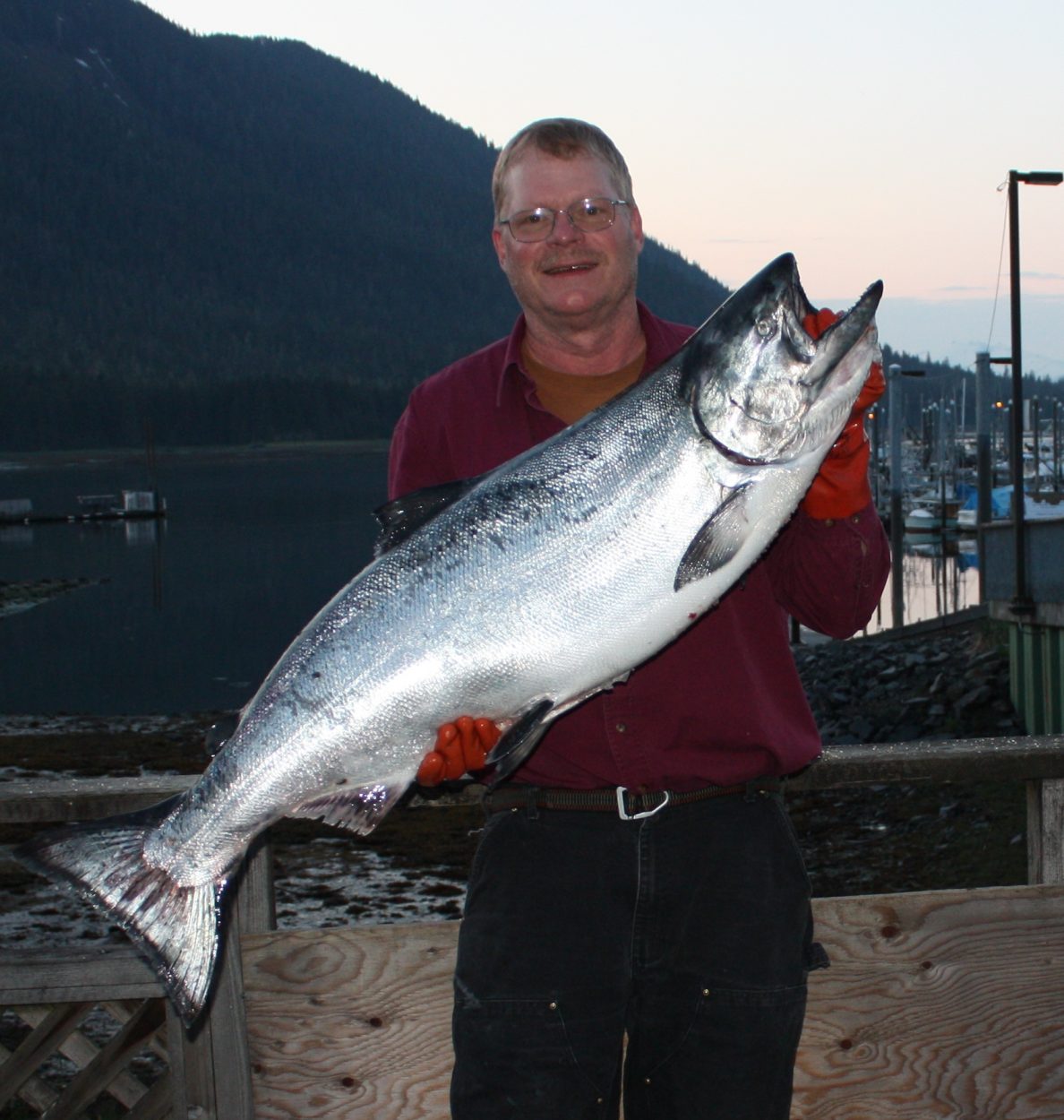 217 fish were caught in Petersburg’s salmon derby this past weekend. That’s far lower than the past few years in which more than 300 have been landed. While fishing was slow, 640 locals and visitors still took part in the annual event and got to enjoy an unusual stretch of warm weather and calm seas. KFSK’s Robbie Feinberg spoke with derby organizers and participants, including the winner who landed his 46.5-pound king solo.
For mobile friendly audio, click here. 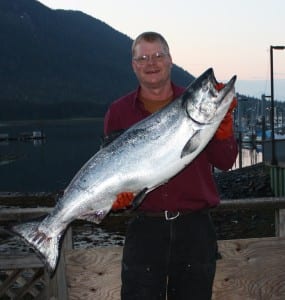 Anglers had a one-fish bag limit under state rules this year, which is down from recent years for resident angler, so that likely played a part in the lower catch overall. But organizers also think the unusually warm and sunny weather had an impact on fishing success.

“It’s too nice! Fish like crappy weather,” said Sally Dwyer, the director of Petersburg’s Chamber of Commerce, which sponsored the derby. “When it’s hot and sunny, they go deeper and they don’t always show. And I still think over 200 fish is pretty great.”

Bill Olson came out to the derby with his wife and children. The family has done well in past derbies, with son Duane bringing in a record 59.8 pounder in 2009. And while the family didn’t catch any particularly large fish this year, Olson’s favorite part was that weather, which led to some unique views of the wildlife.

“And we got to see the neatest things this year,” Olson said. “We had a whale rolling almost on the beach right inside of us, right by the rocks between us and the beach. And we saw a wolf swimming today, that was neat. And then we saw an eagle that locked up with a fish but he never could get him out of the water and he kind of lost it, but it was fun. Like I said, I’ve never seen some of that stuff. I’ve never seen a wolf swimming. So that was pretty neat.” 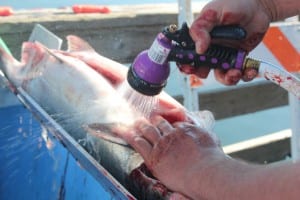 Fish cleaning at the Derby

For Olson’s grandson, Josh, the derby was his first real fishing experience with his grandfather. Josh says that he started off slowly, but he got into the action later on and even caught his first derby fish.

Rich Lowell of Petersburg won the derby with a 46.5-pound salmon. Lowell says that he was excited to catch such a large fish, but his win was definitely unexpected.

“This didn’t seem like it was gonna start out that great because oh, about five days before the day I went to start the boat and the boat motor didn’t work,” Lowell said. 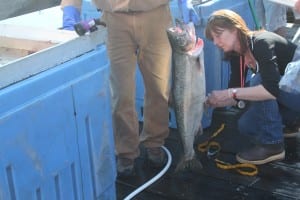 Lowell was able to get the motor repaired, but bad luck continued to haunt him leading up to the derby. First, it was the motor. Then, Lowell’s fishing partner had to pull out of the derby. But the most ominous sign came when Lowell bought his ticket.

“I went down to buy my derby ticket, and this wonderful woman took my information, filled out my derby ticket, handed it to me, and it was number 13,” Lowell said. “And I said okay, I can see how this is shaping up already.”

When he first got out on the water, Lowell only had luck with halibut and small salmon. But on Sunday afternoon, things picked-up. Lowell quickly got a bite. At first, he didn’t think the fish was too large until he landed it after a long battle.

“Lifted it into the boat, and when it was on the deck of the boat, then it dawned on me that this is a good fish,” Lowell said. “And it was really a beautiful fish, too. Great fight. All by myself, it would have been nice to share it with someone, but having done everything – run the kicker, chase the fish, fight it, net it by myself, it was really rewarding. And then I decided to head for town as fast as possible.”

When he got in, Lowell finally relaxed, but he couldn’t breathe easy just yet.

“I know everbody that’s here, so they were as excited,” Lowell said. “When it flashed 46.5 on the weight, everybody kinda cheered. And I was kinda like, “Wow, now I really start worrying.” Anybody could bring in a bigger one. And I know there are some darn good fishermen out there, far better than myself, that were hitting it hard and trying to knock me out. And I just lucked out.”

Right behind Lowell in the derby was Gerry Whitethorn, who came in second with a salmon weighing 41.4 pounds. Whitethorn won the derby in 2010, and he wasn’t spilling any secrets about his success.

“My fish was caught in the water,” Whitethorn said. “That’s about all I can say. It was easy. It just came right in. No big deal. No big fight.”

12-year-old Gunnar Payne came in third with a 37.4 pound salmon. Prizes for the Derby winners will be distributed on Thursday at 7 at the PFI Cookhouse.