Global voyager and arctic adventurer David Scott Cowper Thursday, June 6th will detail changing climate conditions in the arctic and show photos from his travels to an audience in Petersburg. Cowper of Newcastle, England piloted the motor vessel Polar Bound through the normally frozen Northwest Passage last summer, the first pleasure craft to make that crossing through a portion of the passage called the McClure Strait. For his six solo circumnavigations of the globe and five solo transits of the Northwest Passage, Cowper was honored this March by the Cruising Club of America with it’s Blue Water Medal. He made last year’s journey with Jane Maufe and the two have returned to Petersburg to prepare for another adventure through the Northwest Passage. 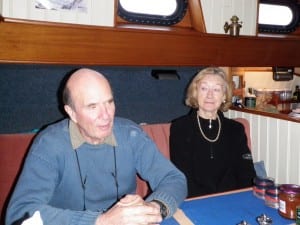 Their vessel, the Polar Bound, spent the winter in Petersburg’s north harbor, where Joe Viechnicki found them back onboard this week.


Cowper will speak about his travels as part of the Petersburg Marine Mammal Center and Alaska Seagrant’s Thursday science series tonight at 7 p.m. at the Lutheran Church’s Holy Cross House.