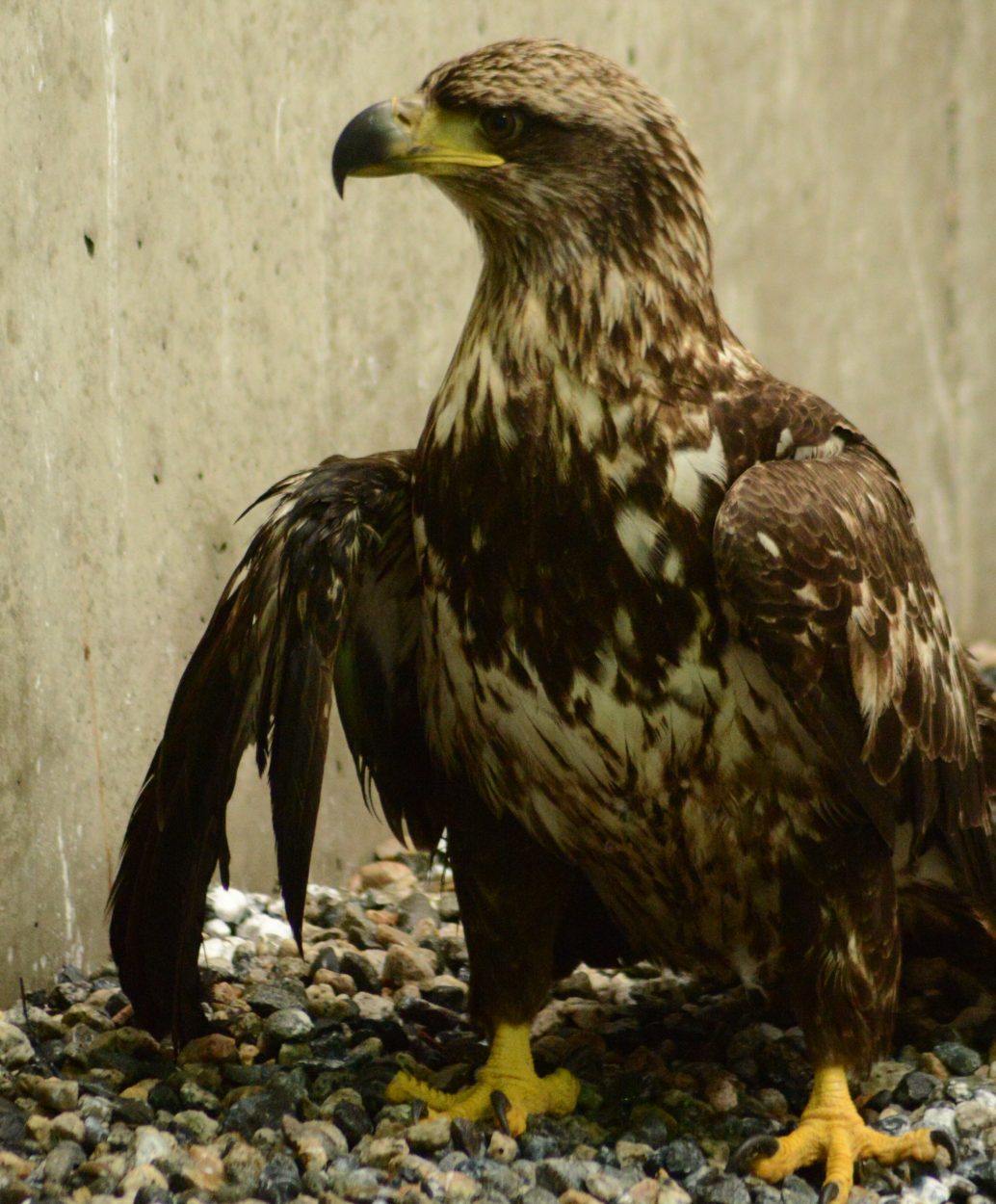 A bald eagle from Petersburg is recovering after being found on the verge of death in mid-June, with a damaged wing and getting pecked at by ravens. A Petersburg visitor and some local officials found the bird and rescued it. Now, the eagle is at the Sitka Raptor Center and looks like it will survive, but as KFSK’s Robbie Feinberg reports, the rescue wasn’t easy. 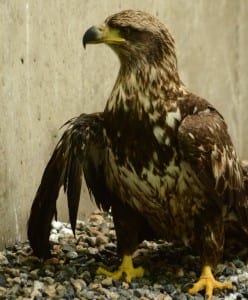 Drew Ross arrived in Petersburg a few weeks ago. He was only here for ten days or so, visiting from California, and the plan was to just relax, spend time with his parents, maybe kayak a little bit. But that all changed when Ross walked by a tree on Nordic Drive.

“And just a little north of Eagle’s Roost, up on a branch there was an adolescent bald eagle,” Ross says. “And we could kind of tell that its wing was all screwed up.”

Ross was concerned for the creature, but he wasn’t too worried just yet. So he waited. But when he came back the next day, he saw the same thing – the injured bird was still there, with a broken wing, struggling to fly.

In Petersburg, injured eagles like this aren’t exactly uncommon. Over half of the bald eagles in the United States live in Alaska, and with its location right on the water, Petersburg makes a perfect nesting spot. Combine that dense eagle population with power lines close to the water, and eagle injuries can become frequent.

But Ross was here from California, and he wasn’t used to seeing an injured bird. So he decided to help it out, and he gave a call to the Sitka Raptor Center and spoke with a coordinator there. At first, she advised him to get help from local officials, but she knew they were probably busy. So she had another idea.

“So, at that point she just kind of said, you might have to do it on your own,” Ross says. “And walked us through the steps to catch a bald eagle.”

Ross says that when he first heard that, he was a little scared. Eagles may look majestic, but they’ve got strength, not to mention a nearly eight-foot wingspan. But Ross says he quickly learned that catching an eagle isn’t too much different from catching a mouse or any other animal.

“If you can get a big jacket or a really big blanket, or just kind of go after it, whether it was up a tree and luckily, it got down on the beach where it was easier,” Ross says. “We actually practiced throwing it. And she said don’t get yourself injured, and once you get its eyes covered, it will become calm.”

Ross was up for the task, but he didn’t want to take it on all by himself. So he recruited a few local officials to help him out. For a few days, the eagle was still too energetic, and whenever they tried to catch it with a few blankets, it would run away or try to hurt them. But three or four days in, the bird calmed down.

“Days went by, ravens started to peck at it,” Ross says. “You could just clearly tell that it wing was getting worse and it had a lot less energy. After that, we just kind of had a window of time and it was down on the beach and at low tide, so we got down there. A few of us just went down there, it took us probably ten or fifteen minutes before we could chase it down, but we got it cornered and through a blanket on it. So we called Fish and Game and they got us a kennel, and I kept it in the kennel in our garage overnight, and the next day we got it sent off to Juneau, to the Raptor Center.”

So the rescue was a success, but the eagle wasn’t out of the woods just yet. Jennifer Cedarleaf is the Avian Rehabilitation Coordinator for the Alaska Raptor Center in Sitka. She says that when the center received the bird from Petersburg, he was alive, but he had sustained some serious damage.

“We did an admit exam on him where we just checked him over, his entire body, to see what kind of injuries he had,” Cedarleaf says. “And we noticed he was in pretty good condition except for the inside of his right wing. We’re not really sure what happened to him, but the whole entire inside of the wing looked like it had been cut, or maybe he was in a fight with another eagle and it maybe scraped the inside of the wing. So he had bones sticking out and tendons were dry from not being the way they were supposed to be. And we did an x-ray on him and nothing was broken, but his wing tip was dislocated and he had all that soft tissue damage to the inside of his wing.”

Cedarleaf says that the eagle wasn’t in the worst condition she’s seen. But it was injured enough that she performed surgery on its wing right away. And while the procedure helped to clean up parts of the wing, she guarantees that it won’t fly again.

“There’s a part of the wing called an alula – it’s like their thumb,” Cedarleaf says. “And it helps them when they’re flying and helps them change directions when they’re diving. And they can move it independently of the rest of their wing. And so when our veterinarian does surgery, she likes to leave the alula attached because it helps to protect the rest of their wing. And his alula is not really attached to anything right now – we left it on, but there’s so much tissue damage that we’re not sure.”

Without that, Cedarleaf says, the eagle won’t fly. However, she added that if the bird recovers, it can continue to live a stable life – just one in a zoo or an educational facility like the raptor center.

As for Ross, he says it’s an experience he’ll remember for a long time. But he adds that he arrived here as an outsider, not used to the town’s culture and wildlife. And he wonders if that may be the reason why he felt compelled to take action.

“It feels good to help out an animal like that,” Ross says. “Especially when it doesn’t seem like there’s a big effort from other people to save it. And yeah, someone that lives in Alaska, they see them every single day. There could be ten a day. But I guess coming from California where they aren’t very common, it seems like such an amazing animal and the last thing you want to see is that thing die. So we just kind of feel it was our duty to help It and we’re happy we did.”

Ross is back in California, but he’s still monitoring the eagle, calling to check on him every few days to see how he’s doing. As of now, the bird survived its surgery, and the center in Sitka is being patient with it, waiting about two weeks to see if it will recover fully.