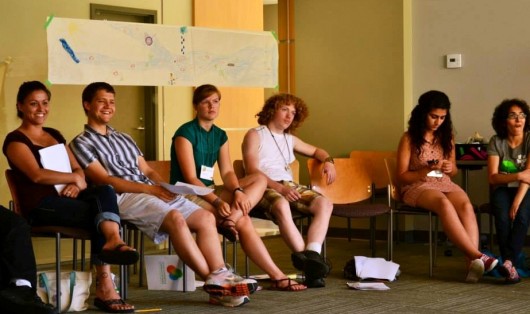 Petersburg resident Galen Reed, second from the left, participates in a discussion including other Alaskans during a Bahá’í youth conference in Vancouver, B.C. Also shown are, from left, Dara Otness, Valerie Schleich, Reilly Gillis, Raz Sadeghi and Sahba Sadeghi. Photo by Elika Roohi.

A Petersburg man recently returned from a regional conference of the Bahá’í faith.

The religion was founded about 150 years ago by the middle eastern prophet Bahá’u’lláh. Bahá’ís believe he built on the work of earlier prophets, including Jesus Christ, Buddha, Moses and Muhammad.

Galen Reed was one of about three dozen Alaskans traveling to Vancouver, British Columbia, for the youth conference. They joined 750 or so Western Canadians at the event, held earlier this month.

Reed is a Forest Service engineer, though he’d headed to graduate school. He’s originally from Wrangell.

He spoke about the conference experience and his faith.

Bahá’í officials say the conference was one of 114 coordinated events worldwide that attracted about 50,000 young people.