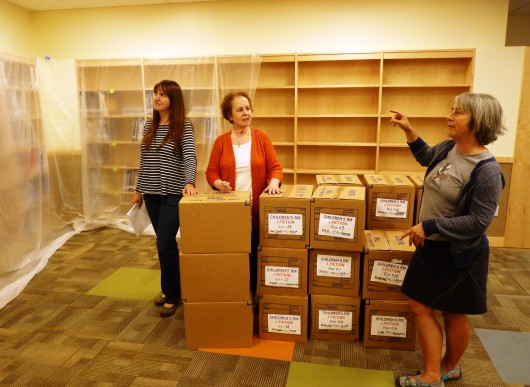 Eight Petersburg artists have been chosen to create new works for the community’s nearly-completed public library. We recently toured the facility and found out more about what’s planned.

What’s going to be on the walls — and windows and fireplace — at the Petersburg Public Library?

Borough Librarian Tara Alcock, staffer Barb Steltz and board member Anne Hurt start the tour off at the circulation desk.

Here, a curved overhead wall will be home to a work called “Tidal River,” by Susan Christensen.

“It’s a 3-D piece of fabric. So, it will have movement. And I think it hangs about 18 inches from the wall.”

So air flow, wind or people opening the door could set it into movement.

Another stop on the tour is a small conference room, with a high ceiling and a view to the outside. It will be home to a painting by Pia Reilly.

“We’re working with Pia as to the location. We’ve got some constraints in this room. She had one idea and the art committee loved that but also had another idea. So we’re still working on that with her as where it will go and its size. And also the composition as well,” she says.

“What we liked about this wall is that it will be able to be seen with these big, beautiful windows opposite. And then it’ll be more of a piece of public art.”

The eight artworks were chosen from among 20 proposals, including some from Anchorage and Washington state.

Library board member Anne Hurt says the selection panel had a number of criteria.

“We were looking for pieces that represented Petersburg and the spaces. And of course, price is always a consideration, because we had a limited budget to work with. The budget was $50,000 for the artwork, for the whole place,” she says.

Many public construction projects require a certain amount of money to be set aside for art or architectural highlights.

“It comes from local donors. So there’s no percent-for-art program here. Our funding sources did not mandate the 1 percent for art,” she says. 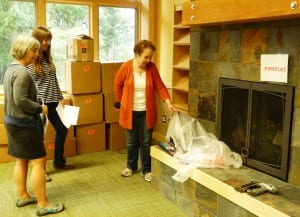 Anne Hurt, right, talks about art in the fireplace area with Barb Steltz and Tara Alcock.

“Ever since we began planning the library, that’s been clearly a priority of the folks who have been at the table every time we talked about it. So it was important to follow through with that,” she says.

One of the selected artists is Ross Nannauck III. He’s making a pair of Tlingit war canoe paddles.

They’ll be hand-carved, using traditional Tlingit tools. Copper and abalone are part of the plan.

“They’re all my own design. Anything I do, I do original design work of my own. I try not to copy anybody and just work with whatever I feel comes to be at the time,” he says.

The paddles will be hung in a lounge area with comfortable seats, flanking a propane fireplace.

Alcock says a print of a Tlingit war canoe will be placed in the same area.

“It’s a piece that hung in the old library, in the children’s area forever. So people might remember seeing it. We’re having it cleaned up a little and framed,” she says.

A piece with a different tradition will hang nearby – a large Norwegian, rosemaled plate by Polly Koeneman.

Steltz says the children’s room, on the other side of the library, will have two paintings, one by Doris Olsen.

“In the section that’s kind of sectioned off for the older elementary (students), above the shelving there’s about a two-and-a-half foot wall space up high. And Doris is going to paint a large squid with a very big eye, because we loved how the squids have the biggest eye of any creature. And so, we thought, being for the little-bit-older kids, that they would really love something big like that,” she says.

Another work selected for the library is a triptych, or three-panel-painting, by Beth Flor. Yet another is a stained-glass work by Polly Lee and Debi McMahon. And there’s also a large, painted mural by Joe Viechnicki – yes, our Joe Viechnicki.

It’ll take a while for all to be completed and installed. But you can see them in place later this year.

The Petersburg Public Library will open late this summer or early fall. Artwork will be installed over the next few months.