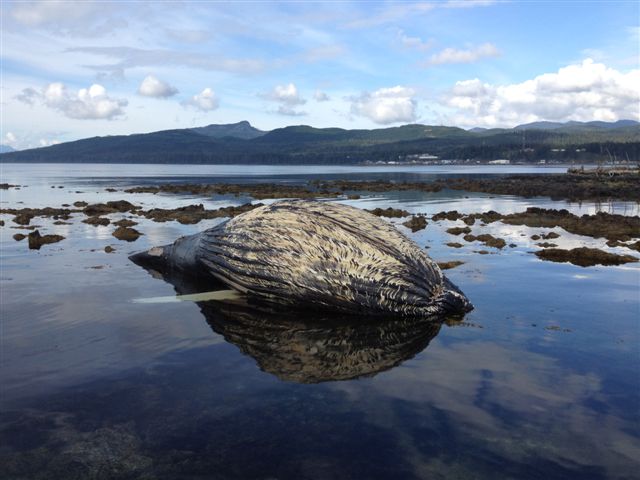 An adult female humpback whale was found dead near the Southeast community of Kake earlier this month.

Kate Savage, a marine mammal specialist with the NOAA Fisheries protected resources division in Juneau, says the dead whale was first reported around September 1st in Keku Strait near Kake. It was later floated to an island outside of Kake and Savage led a team performing a necropsy on the animal on September 11th.

“You know we did a fairly complete exam for example of the abdominal cavity,” Savage says. “And it was a large female, adult female. So we wanted to see if there was pregnancy and there wasn’t. So we kind of had to wade through some pretty gunky decomposed tissue but we did see that it wasn’t pregnant. And we also noted that there was some substantial bruising around the ventral grooves which are the sort of ventral part of the whale that expands when it takes in water prior to filtering out the prey matter.” 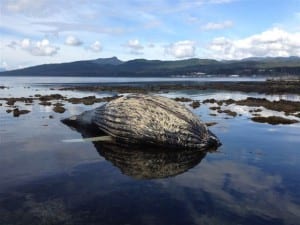 Photographer unknown, provided to NOAA Fisheries by a member of the public

Savage notes it’s too early to determine a cause of the whale’s death but says it looks like injuries to other humpbacks from collisions with vessels.

“You know it’s really tough to come up with a definitive cause of death but it seemed like there’s probably, it’s very probable there’s traumatic injury involved,” she says. “It possibly was a ship strike but you know it’ll, we send samples off and we’ll kinda wait til everything comes back before we come up with a cause of death and even then it wouldn’t be definitive.”

Another dead humpback was found off Cape Edgecumbe near Sitka last month but a response team did not perform a necropsy on that carcass.

The waters around Kake are a popular feeding spot for the region’s humpbacks during the warmer months. Boaters, fishing vessel crews and visitors have reported an unusually high number of humpbacks in Southeast this summer and Savage says she heard that from Kake residents as well. “There were two community members in Kake that were just so incredibly helpful on the necropsy, it was Lloyd and Adam Davis,” Savage says. “They were just wonderful. And one thing Lloyd told me is he’d never seen, throughout his life in Kake he’d never seen as many whales in that area.”

Besides testing the whale near Kake for cause of death, the necropsy team photographed the tail fluke to identify the animal and collected other samples to learn about its genetic background and food sources.

Scientists estimate the numbers of humpbacks in Southeast are rising six to seven percent a year, while reported collisions between the protected marine mammals and vessels are increasing at nearly the same rate.