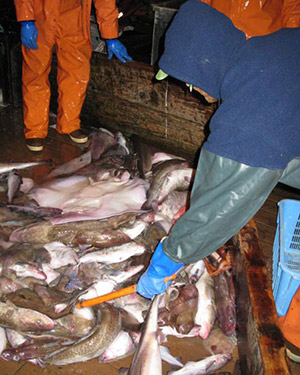 Alaska fishermen want to broaden the experimental use of cameras and other monitoring devices in the federal government’s fishery observer program. Under the recently-revamped program, many more vessels, including smaller boats, can now be required to carry an observer at times. A new industry proposal is aimed at making electronic monitoring available as an alternative to carrying that extra person on the boat. Matt Lichtenstein reports:

The federal government expanded its fishery observer program this past year. For the first time, that meant halibut boats and smaller vessels, 40 to 60 feet long, could be selected to carry an observer. But according to Alaska Longline Fisherman’s Association Director Linda Behnken, that’s not feasible for many, “There’s a lot of the small boat fleet that simply cannot accommodate another person. They don’t have a bunk. They don’t have the safety equipment. They just don’t have space for that. So, we saw a number of people apply for a release to observer coverage on those grounds. Actually 65 percent of the boats selected in the first three quarters of the year, which is the data I’ve seen so far, those 65 percent of the boats that were selected applied for a release and were granted a release.”

Behnken credits Alaska Department of Fish and Game Commissioner and North Pacific Fishery Management Council member Cora Campbell for helping to make sure that relief was available. Behnken thinks the releases were needed to lessen the burden of the expanded program.

However, she says it also meant that the National Marine Fisheries Service fell short of its goals for observer coverage, “So, to our mind, you’re not getting representative data if you’re not hitting those target coverage levels which can mean some problems with extrapolating that data to the remainder of the fleet.”

Behnken says the situation shifted more of the observer burden to boats that were able to accommodate them. Also, she says some fishermen chose not to use their own small boats and instead opted to fish with other skippers who had bigger vessels. She says a few others chose to sell their fishing quotas because of the new regulations.

“We all recognize there will continue to be a need for some….for observers on the water but that there are places, there are times, there is a significant portion of the fleet that is better served by having electronic monitoring to insure you get representative data and you get it in a cost effective way. So, we’re looking to integrate EM, to use it where you can get the data that managers need, and to use it in a way that’s less intrusive and less costly than deploying human observers,” Behnken says.

Federal fishery managers are taking a slower approach to the issue than the industry would like. NMFS has a small-scale EM pilot program that involved just a handful of participants this past year. ALFA wants to incorporate that into the broader, industry-backed project to test technology on more boats. 60 vessels would be the goal for the first year of a five-year effort.

NMFS has been considering the proposal according to Martin Loefflad who is director of the agency’s Fisheries Monitoring and Analysis Division. While he won’t comment on the industry application while it’s still under review, Loefflad says NMFS is also trying to advance EM, “What we’re trying to do is improve the quality of imagery we are getting from vessels. There’s a lot of hype on this EM stuff going on worldwide right now and what we’ve seen is that a lot of work has been done all over the world that has been duplicating the same sorts of things. We want to get out of duplication and actually move this stuff forward. I personally think EM has massive potential and could revolutionize the way we sample, if we do it right.”

Observers record catch data and other information for use in fishery management and research. Loefflad says electronic monitoring will never do exactly what a person does, “People can do a variety of things. EM can do some things very, very well and we want to figure out what things it does well and then so we can use that potentially as a tool to supplement those areas where putting a person on a boat is not a feasible process.”

Loefflad says together, NMFS and the industry may be able to make some progress on moving electronic monitoring forward.

The agency has told the North Pacific Council that it will have the capacity to deploy EM equipment on 14 vessels in its pilot project next year. As an incentive for participation, NMFS proposed that volunteers would avoid the possibility of being selected to carry an observer. That would also be the case for the industry proposal.

National Marine Fisheries Service Staff will be in Petersburg to hold an informational meeting about the fishery observer program in general on Tuesday, December 3rd from 4 to 6 pm in the new Library’s large conference room.