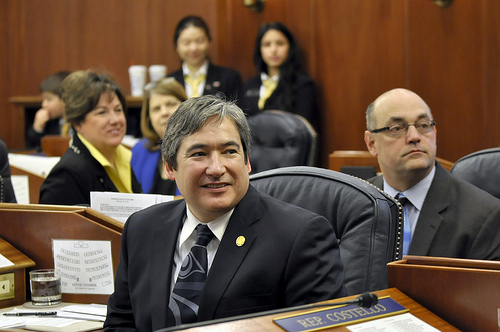 Petersburg’s new representative in the Alaska House has family ties to this community and says he spent some of his summers fishing in Petersburg. Sam Kito III was appointed to the House seat vacated in January by Beth Kerttula. Kito was born in Anchorage and raised in both Fairbanks and Anchorage. 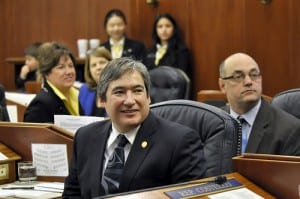 Sam Kito lll (center) looks toward the house gallery during introductions of guests shortly after being sworn in as the new representative for House District 32. (Photo by Skip Gray/Gavel Alaska)

He’s worked as a civil engineer and lobbyist and because of that background is well familiar with the legislature and many of the issues up for debate in Alaska’s capital. Joe Viechnicki spoke with Kito about the remaining days of the legislative session.

For mobile-friendly audio, click here:
Kito says he plans to run for election in the fall. Petersburg will no longer be included in that Juneau house district after this year and will instead by in a different district along with Sitka and a number of smaller Southeast communities.