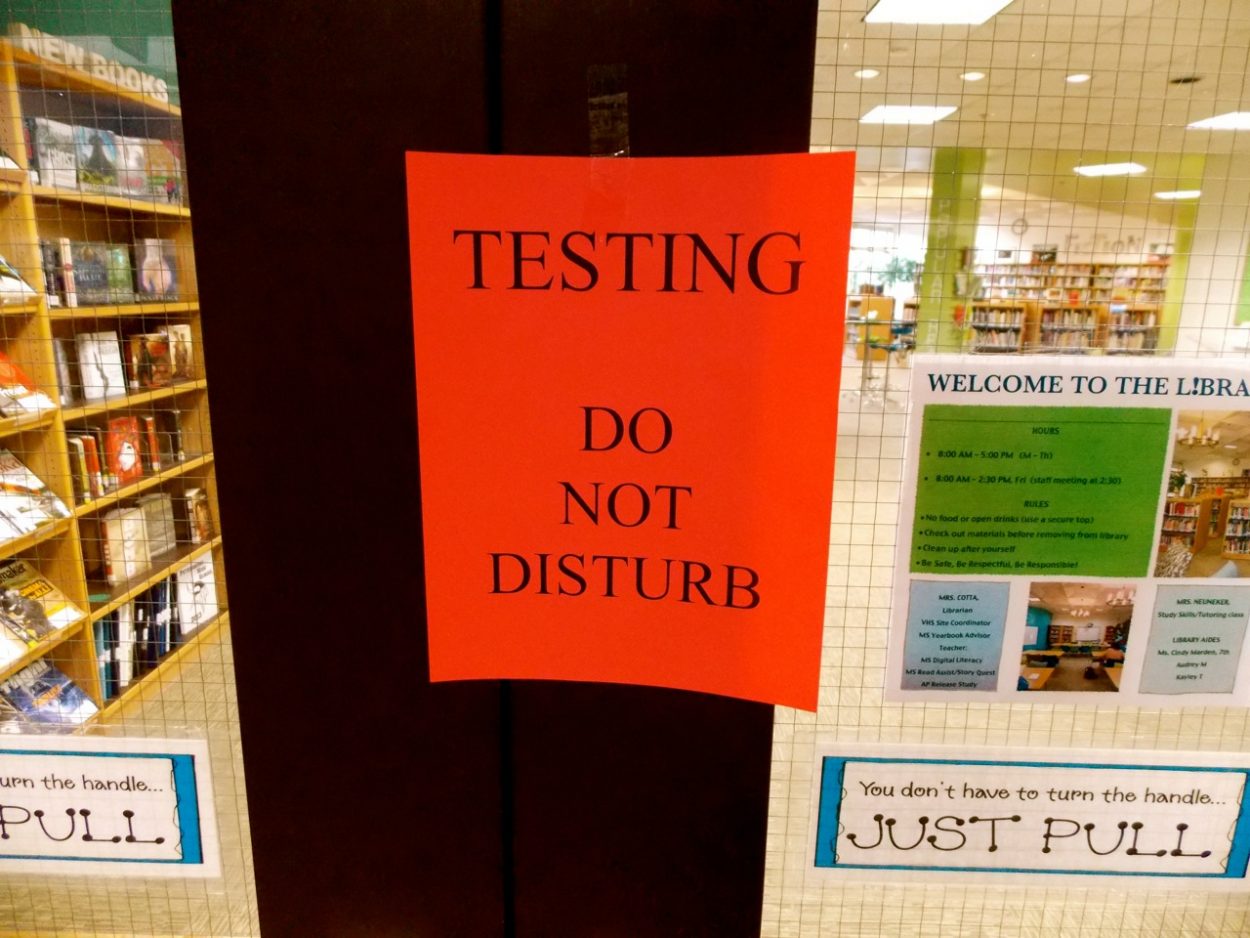 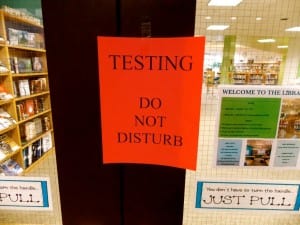 This sign was posted on the high school library doors during testing last week. Photo/Angela Denning

Graduation time is just around the corner and for most seniors that means walking a stage and accepting a diploma. But a few students a year in Petersburg do not receive a diploma because they didn’t pass a test. A bill making its way through the Alaska Legislature would change that. House Bill 220 would repeal the High School Graduation Qualifying Exam.

The high school is especially quiet. Red signs are posted on the outside of the library doors and several classrooms.

High School Principal, Rick Dormer, says large groups of 10th graders are getting tested in the classrooms and smaller groups are in the library. The signs help others know to stay out because a quiet environment is important.

“You can see we have big red signs, ‘Testing, Do not Disturb’,” Dormer says, “We’re in the middle of it here today and kids are in a room and it’s three hours and it’s make it or break it. And we’ve had kids really crying before the test, crying after the test. It’s high stress, it’s high-stakes.”

There’s a lot riding on this test and students feel the pressure. If they don’t pass it, they don’t graduate with a diploma.

“And they must pass in three areas, reading, writing and mathematics. And they must pass it with a certain score that’s set by the state to earn their diploma,” Dormer says. “So despite anything that a student may or may not do, if they complete all graduation requirements, which has happened here in Petersburg, and do not pass this particular exam in the State of Alaska, we cannot give them a diploma in Petersburg High School. Rather, they get what we call a certificate of completion that is not equivalent.”

The certificate does not hold the same weight as a diploma. Students who want to further their education after high school can’t qualify for financial aid.

Sonya Stein is the Director of the Student Financial Assistance Office at the University of Alaska Anchorage.

“The federal department of education requires that a student has a high school diploma or its equivalent in order to be federal financial aid eligible,” says Stein.

An equivalent would be the GED or the General Education Development, which would require students to pass another test.

The exit exam has been required in Alaska for a decade. It was established through state law before the No Child Left Behind Law prompted other standardized tests.

There’s no middle ground with the exit exam.  . .either you pass it or you don’t.

Principal Rick Dormer says it can be heart breaking.

“I can tell you we’ve had two students who have not passed the test by one point, one section by one point,” Dormer says.

In both cases, the school paid some extra money to appeal the results to the state’s education department but it didn’t work.

“We don’t believe that’s the best assessment of a kid’s knowledge of what they know,” Dormer says. “Really any testing is there just as a measure to see what they know and then you build on it and so we don’t agree that high stakes testing is the best measure of what a kids knowledge is and whether or not they deserve a diploma. I think it’s a much more complicated than a one shot test.”

House Bill 220 would work retroactively, so past students who received a certificate instead of a diploma because they didn’t pass the test would be able to get a diploma. They’d just have to request it.

So far the bill hasn’t seen much opposition. It passed the House with a vote of 32 to 5. The Parnell administration and the Education Department support getting rid of the test as well.

The bill is sponsored by Representative Pete Higgins, a Republican from Fairbanks.