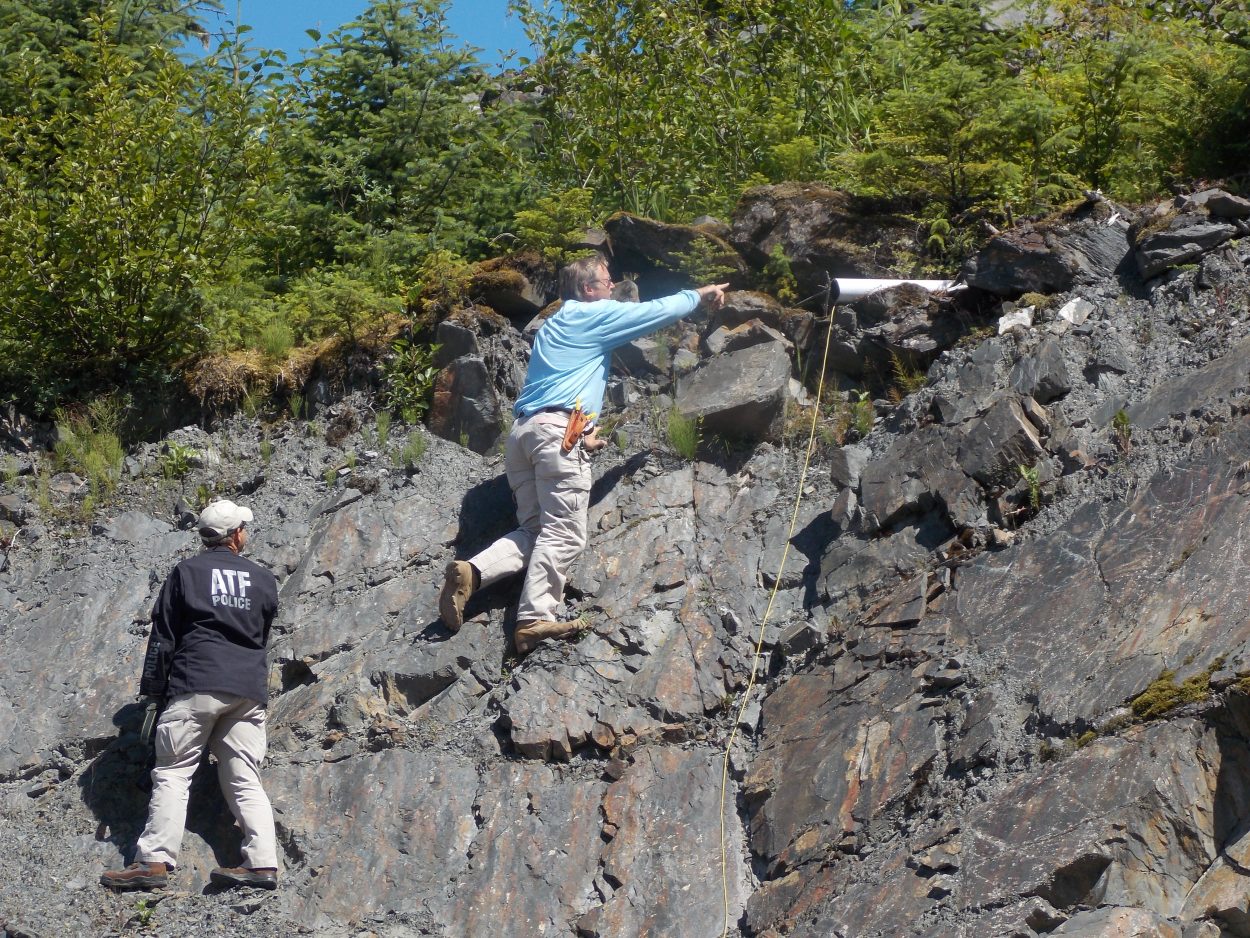 Federal agents destroyed over 50 pounds of an explosive in Petersburg’s rock pit behind the community’s airport Wednesday afternoon. It was a blast that shook some homes and had residents wondering whether an earthquake had struck. The explosives were rounded up by authorities this week after a 59-year-old Petersburg man injured himself in a blast at the rock pit on Sunday.
17EXPLODEweb
The blast was large enough to shake a camera on the far side of the large rock pit and felt by residents in town a mile or two away. A small gathering of federal, state and local law enforcement officers, along with volunteer fire fighters and media representatives watched the dust settle afterwards.

Brennan Phillips, an explosives enforcement officer with the Bureau of Alcohol Tobacco and Firearms Seattle field division, said agents recovered over 50 pounds of an explosive called Tovex, along with electric detonators and cord. “Tovex is really a very safe commercial blasting explosive. It really replaces dynamite. Dynamite is still made for specialty applications. Largely what would have been done 80 years ago with dynamite is now done with tovex. Doesn’t have the nitroglycerin in it, it’s safer to handle, it’s cheaper to produce. It’s cheaper for the industry as well.”

The agents also burned up what they called “a large amount” of smokeless powder they recovered. It can be used to make improvised explosive devices. 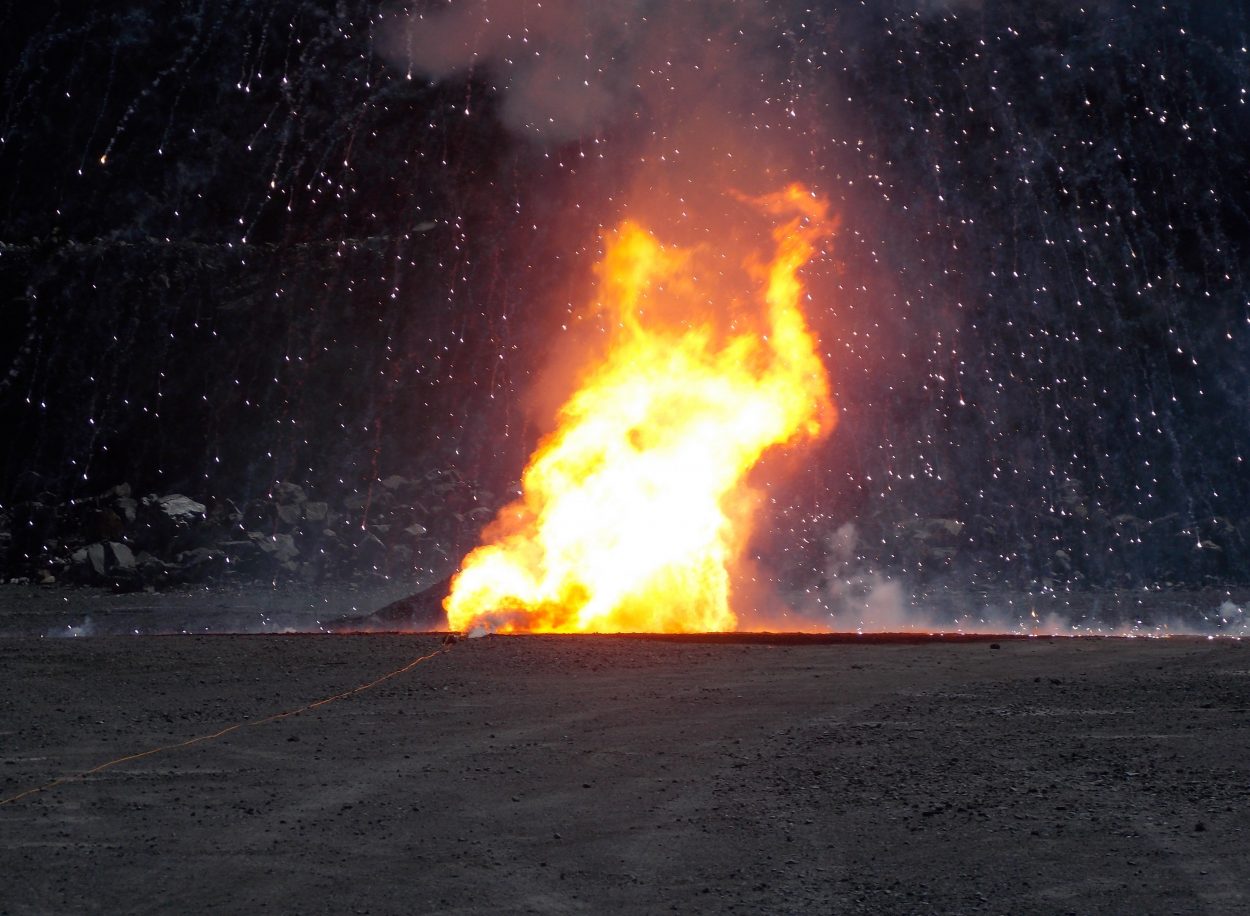 Phillips and other ATF officers were in town, along with an detection dog, and agents with the Federal Bureau of Investigation. They were assisting the local police department in investigating Sunday’s unexpected blast. Phillips said they searched for additional explosives. “We conducted through our investigation, searched the areas that we thought needed to be searched. We searched a number of areas. We brought a fair amount of resources into Petersburg here to work with the local police department. I’ll defer to the police department on some of that but I think we’ve done a good thorough check.”

Agents get a closer look at some blasting cord and pipe hanging from the rock wall of the pit Wednesday, after they’d detonated other explosive material. They did not find any additional explosives in that spot.

Sunday’s blast injured a 59-year-old Petersburg man. Police declined to identify him. However, they were searching a home and property owned by 59-year-old Mark Weaver. Petersburg police chief Kelly Swihart said Sunday’s blast occurred in the same rock pit. “The initial detonation was down here by this pile of sand from what we can tell. And the victim was able to drive himself to the hospital. We found more explosives in the truck, determined they were fairly stable probably and made the decision to bring them back here and secure it here because we wanted to make sure everything was in one central location as much as possible.”

Police pointed out what they think was the site of the initial explosion with some remaining clumps of the gelatinous substance along with what appears to be blood stains from the victim.

Swihart did not know if any laws were broken in possessing the explosives.
:22 “The explosives that they’ve identified tentatively the tovex is commercially available and if you’ve got the proper permits and licenses in place you can possess that. And I’m not sure if this individual has those or not the ATF is still researching that. But if there’s a crime here it’s how they were put together and how they were used and that’s what they’re trying to figure out.”

Swihart is not sure how long the investigation will take.