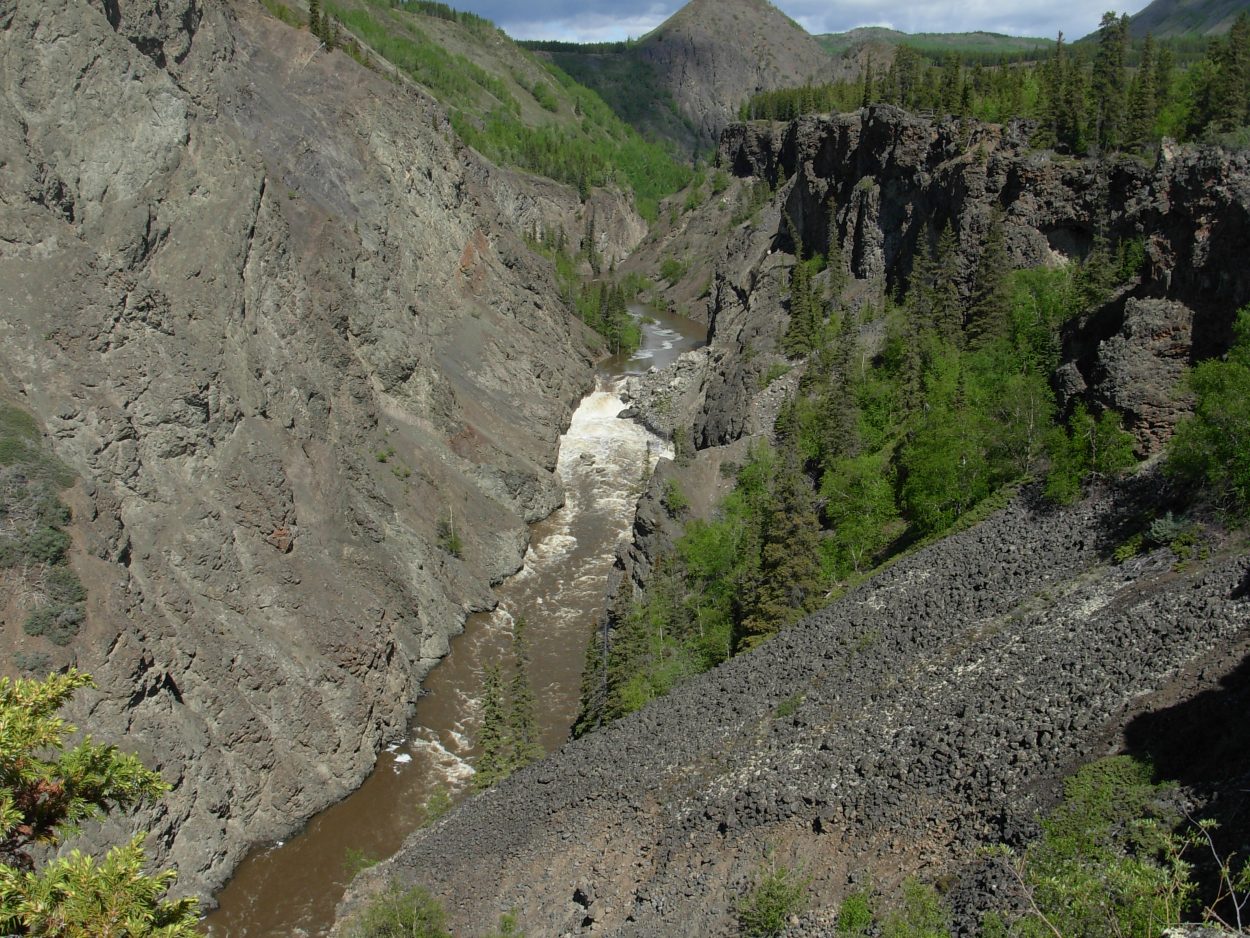 Fishery managers in Canada this summer are moving salmon by helicopter around a landslide that’s partially blocked a major tributary of the Stikine River across the border from Southeast Alaska. The May slide created a barrier for Chinook and sockeye salmon returning to the Tahltan River to spawn.
22TAHLTANweb
Steve Gotch is Fisheries and Oceans Canada’s area director for Yukon and northwestern British Columbia. He said his department learned about what is believed to be a naturally occurring landslide on May 21. “If I were to estimate the nature of the situation it’s blocked off approximately two thirds to three quarters the width of the channel and what has resulted is the remaining flow of water is funneling down through a small almost like a stepped waterfall or chute and it’s the velocity of the water moving through that chute that in fact is creating a barrier to migrating fish,” Gotch said. 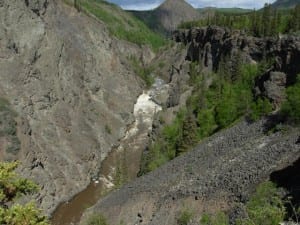 The barrier is above the confluence of the Tahltan and Stikine rivers. Gotch said the Tahltan supports about half of the sockeye and half of the Chinook produced in the Stikine River watershed each year. “So in response to the situation, in cooperation with the Tahltan and Iskut First Nations, the local first nations in the area we undertook salvage operations in early July with the object of capturing adult salmon staging below the blockage area and in fact capturing those fish and transporting them via helicopter to a release site approximately 10 miles upstream.”

Gotch estimated about 20-25,000 sockeye should be arriving at the blockage area in July and around 3,500 king salmon. The goal is to transport 8,000 sockeye and 1,000 Chinook upstream of the slide. As of July 17th, Fisheries and Oceans had helicoptered about 2,000 fish total, 1,700 sockeye and 300 Chinook, around the barrier. The hope was to transport about 400 fish per day through the end of July.

Gotch said one recent development is that some of the salmon have been able to make it around the slide. “Our technicians working in the area have observed that a small number of fish have been able to ascend or migrate past the barrier on their own accord. So this suggests to us that some fish are certainly getting past the barrier at this point in time. We don’t know how many but in fact any additional fish will be beneficial to sustaining the run in the long term.”

It’s not the first blockage on the Tahltan. A similar barrier occurred in 1965. Fisheries and Oceans also transported fish that year. “In that particular case the barrier remediated itself or resolved itself the following year during the freshet or spring flood water period, where basically there was sufficient erosion that fish passage was naturally re-established for the coming return.”

The Tahltan sockeye and kings are caught by commercial fishing boats in Southeast Alaskan waters. Troy Thynes is the Alaska Department of Fish and Game’s area management biologist for Petersburg and Wrangell. He said managers are concerned with whether enough fish will make it back to spawning grounds, also known escapement. “Even though we’ve passed plenty of fish into the river for escapement, escapement is a concern this year,” Thynes said.

Fish and Game’s latest in-season forecast for the Tahltan sockeye run is 150,000. “Like I said it’s a big concern to both the US and Canada and Canada’s been making some very good effort and doing everything they can to get some fish over the barrier so we can have escapement there.”

The salmon are also caught in subsistence fisheries on the Stikine River. Across the border, Fisheries and Oceans Canada will re-evaluate the slide and barrier this fall and determine if they need to remove some of the barrier for future years.