Borough employees in Petersburg have a new contract this month. Following a closed door executive session Monday, Petersburg’s borough assembly voted to ratify a collective bargaining agreement with the Petersburg Municipal Employees Association. That union represents 79 workers in most municipal departments and also voted to approved the pact this month.
24PMEAweb
The most recent collective bargaining agreement with PMEA expired in June. Negotiations between the borough and the union started early that month and they resulted in a new three year contract. 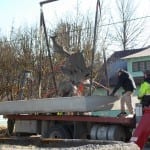 Borough manager Steve Giesbrecht thought this summer’s negotiations were relatively smooth. “As any negotiations will be, I hate to use the word confrontational, but where there’s a lot of discussion that can get heated and neither side gets 100 percent of what they want. But it appeared to be done in good faith. I didn’t hear stories of lots of people yelling, I didn’t have employees coming in to say they were unhappy with the process to me. So knock on wood I think it went really really well and everybody came out of it still friends.”

That wasn’t the case three years ago. Negotiations under the prior city manager were drawn out and contentious and required a mediator after the two sides reached an impasse.

“We ended up with I guess a fair contract to both parties. Some people came out ahead, some others a little behind,” said Justin Haley, PMEA chapter chair. Haley, who works at the borough’s waste water treatment plant, said he’s happy negotiations are done. He agreed this round of negotiations was much smoother than the preceding one but thinks that prior impasse may have impacted the employees vote. “We were pretty evenly split this time around as far as in favor and not in favor but so many people remembered that last time that that weighed heavy on some decisions and we didn’t want to go there again.”

The new contract includes a one percent cost of living wage increase in the second year and two percent in the third year, but nothing in the first year of the agreement. There are also some additional wage steps added in. Those allows for increased wages for employees who stay with the borough longer. One of biggest changes from the old contract is a shift in the burden of health insurance. The old agreement covered 100 percent of health care costs for employees but only a portion of costs for families and dependents. The new agreement has the borough paying 80 percent of costs for both employees and their families.

Haley said the health insurance change was a big deal. “For people with families it was a huge benefit to go with the new plan. On the flip side of that the employee onlys that hadn’t had to pay for insurance before now they took quite a hit. Most of them probably wont end up anywhere ahead at the end of this contract. They’ll end up losing money with this contract.”

The 79 members of the PMEA did ratify the new agreement, although Haley says it was not an overwhelming majority. Another concession from the employees was a reduction in vacation time for new hires. “You know that created quite a bit of heartburn on our side cause we took a hit the last time around and we didn’t like to see that one come back up,” Haley said. ‘But it’s a give and take and we had to give.”

One perk for more recent hires is a matching payment for employees putting money into a 401k style retirement plan. That’s for employees hired after 2006 covered under tier four of the state’s Public Employees Retirement System.

Overall it was a wide-ranging revision of the contract. And borough manager Giesbrecht says it was needed. “You know we had even issues internally where the union and the management team agreed that we didn’t exactly understand some of the language as interpreted. We had an arbitration case that came up that we all thought one way and an arbitrator read it a totally different way. So we think we have a lot of that worked out. We’ll see over time but I think we’re pretty happy with it.

The new contract has changes to the grievance and disciplinary processes. Over the three year life of the pact, Giesbrecht said wage increases and additional wage steps will cost the municipality an additional 223,000 dollars. That does not take into account the health insurance changes or the new retirement benefit payment. The borough won’t know those costs until employees make decisions about insurance coverage or retirement payments.

Giesbrecht said the change in health care costs was a move to stay competitive with other employers. “We were comparing ourselves to Wrangell, Sitka and Ketchikan, even the hospital here is on a 90-10 basis and were were actually if you looked at the overall picture the borough had lesser benefits. So it’s a competitive issue to some extent. We wanted to improve particularly for the family groups who were feeling the pinch and were having a hard time getting their kids insured or their families insured.”

Giesbrecht noted the borough sought a change in wages after making comparisons with other communities. “We found that our entry level wages were high but our mid-point and ending wages were low. So again, that’s why the added steps so people who stayed here longer could make more. That’s why in the first year of the contract we did not give raises except for people who qualify for the new steps, to try and bring some of that back into line.”

The new agreement runs through June of 2017 and it covers most borough employees except for department supervisors and electrical workers.