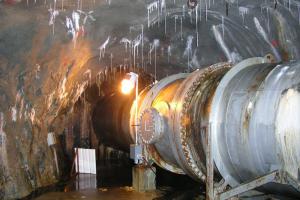 The transfer of operations of a hydro electric power plant in central Southeast Alaska is progressing this summer and could be completed sometime in August. The owner of the plant, the Ketchikan-based Southeast Alaska Power Agency will take over running the facility. That will mean a different future role for the joint Wrangell and Petersburg organization that has been overseeing operations.
The Tyee Lake plant on the mainland east of Wrangell provides cheap hydro-electricity to Wrangell, Petersburg and Ketchikan. It’s run by the Thomas Bay Power Authority and overseen by a seven-person appointed commission of Wrangell and Petersburg residents. That commission in July voted to hand over day-to-day operations to the owner of the plant, the Southeast Alaska Power Agency, or SEAPA. Thomas Bay commissioner Joe Nelson of Petersburg praised the work done on the transfer agreement. “I think it’s a great document,” Nelson said. “I think it protects the Thomas Bay employees that will now become SEAPA employees.”

The transfer is a complicated thing, requiring approval by the municipal governments, the Thomas Bay Commission, the employees and SEAPA. That organization’s attorney Joel Paisner helped negotiate the agreement and attended a recent Thomas Bay meeting by phone. “There’s been a lot of care by counsel from Petersburg and Wrangell to protect each of the communities’ interest here.”

The agreement has SEAPA taking over future payments into the state’s public employee retirement system for workers at the power plant. It also requires SEAPA to maintain an office in Wrangell. Assemblies in Wrangell and Petersburg have signed off on the pact. SEAPA has a tentative collective bargaining agreement with the International Brotherhood of Electrical Workers, the union representing the employees. Once that’s ratified, the actual transfer could happen sometime in the middle of August.

It’s been a somewhat controversial transfer for some in Wrangell, with concern over the loss of jobs. That’s been the case for two people already. The commission terminated its general manager this year, and that manager terminated the Thomas Bay office secretary. In additional two members of the commission from Wrangell, the president and secretary, resigned this spring.

With the transfer approved, Larson wanted to start the discussion about the future role of the Thomas Bay Power Commission. “I personally think there is a need outside the operating agreement for Thomas Bay and the transmission line for a body that addresses power needs, future power needs of the two communities and we could coordinate between them.”

Thomas Bay was created 40 years ago by the two communities to look for electrical power sources. Clay Hammer of Wrangell thought the future role would be up to the borough assemblies. He thought the commission could focus in the future on environmental concerns, water management or other needs but didn’t necessarily think the focus would involve electrical power. “Personally I feel that SEAPA is doing a more than adequate job of addressing our power needs, they’re going out addressing future projects, they’re assessing load, they’re doing all the things that Thomas Bay used to do back in the day and then some,” Hammer said.

Several at the meeting thought Thomas Bay would become more of an advisory group. Joe Nelson of Petersburg thought that would be important for complicated agreements that dictate power purchases by local utilities. “I think as SEAPA develops new projects and as new resources come online, there may be a need, or there’s probably going to be some pressure on revisiting these power sales agreements. So I think it would be good for the two assemblies to have this organization to look at what might come up, give it a hard look, a study and then come back and make a recommendation on how they might move forward.”

Commissioners agreed that they should have new commission president Robert Larson report to the two assemblies and seek some direction. The commission has another meeting scheduled September 9th.