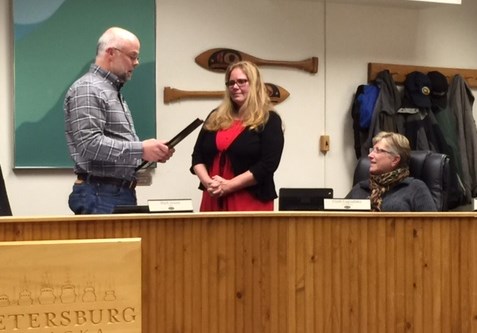 Petersburg’s borough clerk is retiring next spring and she is being recognized for decades of work in local governments in Alaska and Michigan.

Kathy O’Rear received a standing ovation at the borough assembly meeting Monday night after mayor Mark Jensen read from a 2014 presidential award of distinction presented by the Alaska Association of Municipal Clerks. “And whereas Kathy tirelessly took the administrative lead in the creation of the Petersburg borough from the former city of Petersburg organization which was a extremely polarizing public issue, served as an interim city manager, I remember that, and human resources director, all while balancing the day to day responsibilities that are part of a thriving and evolving local government and community,” Jensen read.

Photo courtesy of Borough of Petersburg.

O’Rear took over the clerk’s job with the city of Petersburg in the summer of 2000 and was instrumental in the transition to the new borough government. Before coming here she worked for 16 years as a city clerk in Michigan. Municipal clerks manage local elections and keep all records for local governments.

O’Rear plans to retire at the end of next March and the borough is planning to promote deputy clerk Debbie Thompson to the job.