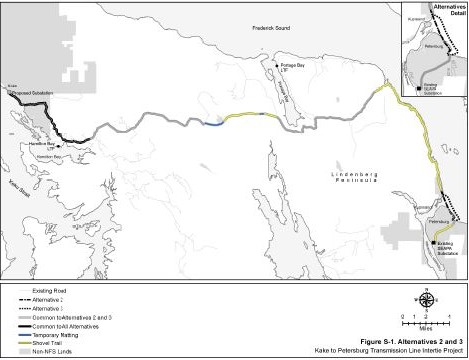 A draft environmental review for a proposed electrical power line between Kake and Petersburg is out this month, a major milestone for the long-discussed project. The document could lead to the selection of a route for the transmission line across Kupreanof Island in central Southeast Alaska.

The intertie could make cheap hydro-electric power available to the 600 residents of Kake, who rely on costly diesel generators. Businesses in Kake pay five to six times the amount for electricity that customers in Petersburg do. It’s cheaper for residents there thanks to a subsidy from the state, but still more costly to turn on the lights.

The new power line would run between 52 and 60 miles long, depending on the route. It would need to make one or two water crossings and would cut through some remote parts of the Tongass National Forest. Beside other state and federal permits, the project will require a special use permit from the U.S. Forest Service to cross national forest land on Kupreanof Island.

The Forest Service has released a draft Environmental Impact Statement on the power line this month. The agency’s project manager Tom Parker agrees it’s a big milestone. “Yeah it’s been in the works for essentially since the 70s but Tetra Tech (Inc.) the contractor has been working on it for about four years,” Parker said of the EIS.

The Ketchikan-based Southeast Alaska Power Agency owns hydro electric plants near Ketchikan and Wrangell along with a transmission line linking those communities and Petersburg. SEAPA is looking into the powerline extension to Kake. Leaders in that community have lobbied for a power connection for decades.

Parker said the draft environmental document contains four alternatives, with the first being a no-action alternative. “Alternative two is the proposed action. Alternative two and three are very similar in the way that they look. They come up on the north side of the Kupreanof Island. One of them uses an underground underwater bore to tap into the Mitkof side and alternative three uses an underwater cable that stretches out across in front of the Narrows.” 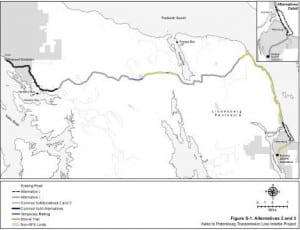 From the Kake to Petersburg transmission line draft EIS

The fourth alternative crosses the Wrangell Narrows south of Petersburg and then follows existing roads across the Lindenberg Penninsula before crossing Duncan Canal and heading north and west toward Kake. 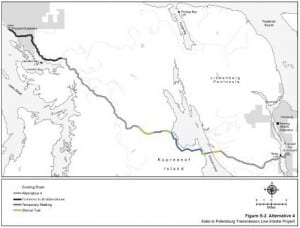 From the Kake to Petersburg transmission line intertie draft EIS

The alternatives avoid crossing Petersburg Creek, an earlier option that is no longer in consideration because of impacts to the popular hunting and fishing destination.

Over 80 percent of the route would cross national forest land. Both routes would cross roadless areas of the forest but the project was specifically excluded from that roadless rule prohibition on new development in unroaded parts of the Tongass. Parker said the three action alternatives try to use existing forest roads as much as possible. “No proposed roads are planned at this time,” Parker said. “They’re looking at just doing wooden telephone poles throughout with a span of like 350 feet between each pole through both of the routes or either one of the routes I should say. So we’re looking at minimal impact.”

The line would require construction of around 700-800 wooden power poles. Clearing of the route would impact between 350 and 500 acres of productive forest land and more than one and a half million board feet of timber would be removed from the regional timber base. In addition, construction of the line would require temporary shovel trails, matting panels and stream crossings to bring in equipment.
Of the action alternatives, alternative four, the southern route, would have the least impact on roadless areas, scenery, deer winter habitat, old growth forest and forested wetlands. That route would also have a shorter distance of the line not along an existing road and nearly half the number of helicopter pads of the northern routes.

A 45-day comment period on the draft document begins on December 26th. The Forest Service expects to schedule open house meetings on the document in Kake and Petersburg on the 13th and 14th of January.
Ultimately the Forest Supervisor decides on a permit for the project and possibly an easement along the selected route. A final decision could be out in July.

Meanwhile, a separate project to look at a road and shuttle ferry link between the two communities is at least a year behind the power line review. The Alaska Department of Transportation and Federal Highway Administration surveyed residents of Petersburg and Kake this fall and are compiling a report on the demand for a road link. The agencies expect to have public meetings here on the topic sometime early next year. A draft environmental study of that road and shuttle ferry is not due out until 2016. The state appropriated 40 million dollars for the road project; there’s no funding secured yet for construction of the power line.

To comment on the draft EIS, email the U.S. Forest Service with Kake-Petersburg Intertie in the subject line at comments-alaska-tongass-petersburg@fs.fed.us