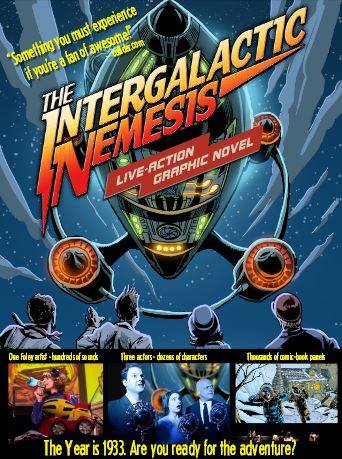 Fans of comic books and radio drama are in for a treat this weekend in Petersburg as the critically acclaimed multi-media performance “The Intergalactic Nemesis” will be doing two shows this weekend at the Wright Auditorium. The show is a live-action graphic novel performed by three actors.

It has been featured on Broadway, the Conan O’Brien show and in venues across the U.S. and Canada. The Petersburg Arts Council is sponsoring the group’s show here; it’s one of six this winter planned in Alaska. To find out more, Joe Viechnicki spoke with Jason Neulander, creator of the show.

The show also plans stops in Juneau, Anchorage, Valdez, Kodiak and Fairbanks. In Petersburg, “The Intergalatic Nemesis” will be performed Saturday, January 17 and Sunday, January 18 at 7 p.m. in the Wright Auditorium. Tickets are on sale at Lees Clothing, the Petersburg Chamber of Commerce and at the door.
Here’s a link to a 2012 feature on NPR.