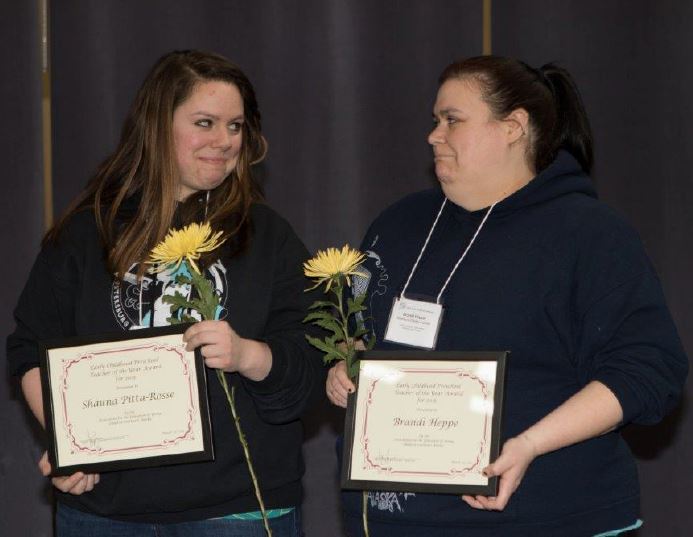 Two staff members at the Petersburg Children’s Center were honored this month as pre-school teachers of the year during an annual conference of the Association for the Education of Young Children in Juneau. It’s the second year in a row for a teacher at the center to receive an award.

The center’s two pre-school teachers Brandi Heppe and Shauna Pitta-Rosse were named pre-school teachers of the year during the annual two-day Early Childhood Conference the first weekend in March. They are back at work and surrounded by their students. 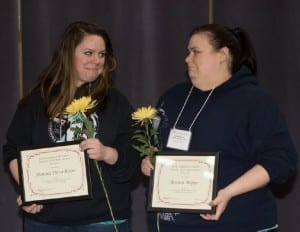 “It was a big surprise,” said Heppe. “We had no idea we were even nominated for the award. And then when they called our name at the thing we both we very shocked and surprised.”

Heppe has worked at the center for seven years, starting as a cook for the program, moving to teacher’s assistant and she now works as the lead teacher with the 4-5 year olds. Pitta-Rosse has worked there for three years and teaches the 3-4 year olds. Both work with 10-12 kids each day and the two were nominated for the award together because they work well together.

Pitta-Rosse said they both took over their classrooms at the same time. “And so we’ve been kindof finding ourselves as teachers together,” she said. “And then our personalities match perfectly. And so we do a lot of our bigger projects together, field trips, you know we’ve been transforming the back yard together. So it’s really awesome to have somebody on the same wavelength instead of being on your own island kind of thing, so it’s fantastic.”

After attending last year’s AEYC conference, Pitta-Rosse wrote a grant for Science Technology Engineering and Math education equipment and materials through the Petersburg Community Foundation. She said the two teachers plan to apply again for more grant funding and are incorporating the materials into the preschool day. “We have microscopes and we do science projects with them,” Pitta-Rosse said. “And like simple stuff like getting different kinds of building blocks in the engineering type stuff, you know. It seems like we wouldn’t be because they’re preschoolers but absolutely, the foundation for that is here and it’s really fun. Like some of the ooey-gooey icky stuff you get to get into with science projects is amazing.”

Both point out the children’s center is a pre-school not just a day care facility and the award recognizes the hard work they’ve put into their jobs. Heppe said it’s a humbling award too. “Like (Pitta-Rosse) said we’re not doing this because of the money we’re doing it because we love what we’re doing everyday,” said Heppe. “We love seeing our children smile. We love just being here, that the award is just… It just shows how much hard work we have really put into everything we do.”

The teachers were surprised by the awards during a lunchtime ceremony at the conference with about 250 people attending from around Southeast.

Terri Falter, the center’s director nominated the two. “I nominated them because of their resourcefulness that they use in the classroom. We are a non-profit so we don’t always have the funds to buy supplies and equipment to do things. But their imaginations take them anywhere. They get together and their ideas are unstoppable. I mean they just keep going and their creativity is really good and the experiences they provide for the children is just phenomenal.”

Falter said the award shows the quality of care the center provides. “We had Fillmore Evenson last year get the award for school age teachers. So two years in a row we’ve came back from the conference with top honors for staff here at the children’s center. So I think it says a lot about the job that they do here.”

The children’s center has 14 teachers and runs programs year round. It’s licensed for 42 kids and averages 39 kids a day with a big waiting list.

(Editor’s note: This story has been corrected to remove a reference to state funding for the children’s center. The center is licensed by the state but not funded by the state. KFSK regrets the error.)