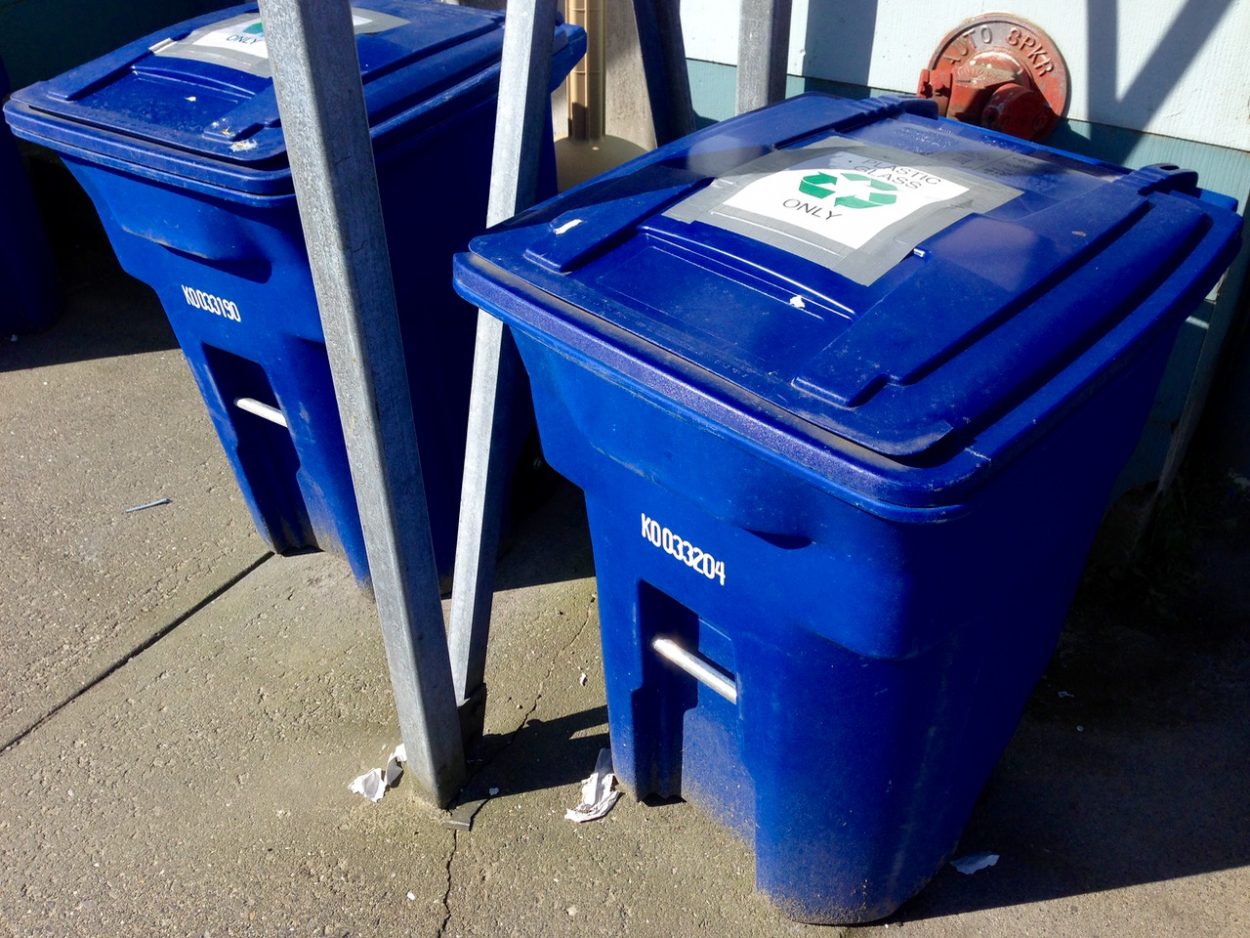 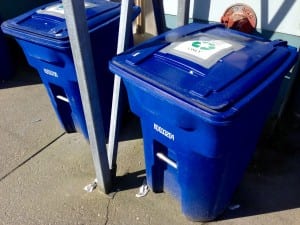 All cart customers would use 96 gallon blue recycling bins like these. Photo/Angela Denning

The Petersburg Borough Assembly will pursue having two recycling programs at once. The assembly voted Monday night to look into offering both bags and carts to customers.

Curbside recycling will continue in Petersburg but it might look a little different. The assembly passed a resolution that looks to give recycling customers a choice of how they put their recycling on the curb—either using blue plastic bags or a cart on wheels. A private contractor would collect the bags as it does now and the borough would start collecting the carts.

With the passage of the resolution, the sanitation ordinance must be re-written and have three readings in front of the assembly before any law changes.

Angela Davis, co-owner of Rugers Trucking, which has the recycling contract with the borough questioned how the sanitation department is going to afford two programs.

“Proposing two recycling programs to appease community members and department heads is irresponsible,” Davis said. “There is no need to spend nearly $300,000 on a garbage truck and recycling containers and pay a monthly subcontractor a contract.”

Davis submitted a resolution to the borough looking for the issue to go before voters. She will be gathering signatures to that end. However, the resolution will be mute IF the assembly continues to support their own similar resolution.

The assembly’s vote came after hearing from half a dozen residents about recycling. Most of them spoke in favor of keeping the blue bag program as is.

“I would be remiss as a private business to not support Rugers Trucking,” said resident, Kate Kowalski. “As a Chamber of Commerce member, it is my responsibility to promote a strong diversified economy and to maintain a high quality of life in Petersburg.”

Patty Randrup also spoke in favor of keeping the recycling program the way it is with a private business collecting the blue bags. She said she was worried about the town losing another family if the Davis’ were put out of business.

“People are leaving every day, whole families,” Randrup said. “You go into church, you say goodbye to a whole family because they can’t make it here in town. They can’t afford it. And now you’ve got a private business with a family. And you’re saying, “Eh, we don’t need you anymore, the borough’s going to do it. No, the borough isn’t, it’s going to keep spending more money and more money that people don’t have.”

Resident Bob Martin also spoke in favor of the private contractor. He said if the borough got into recycling it would kill any decent bid contract.

“Basically, they would just be getting the leftovers and eventually, I think there’s no question, the carts would win the day and we’re back to a borough only service,” Martin said.

Martin wanted to see the whole recycling program go out to bid, for the truck, operator, everything. That didn’t happen. At the meeting, the assembly voted to purchase a recycling sanitation truck from Anchorage for about $207,000. The vote was 5 to 1 with Bob Flynn as the only no vote.

The assembly heard from just one resident in favor of moving toward a cart system and that was Karen Malcom. She said she doesn’t want her garbage rates to go up nine percent in the next year, which would happen if the blue bag program stayed the same.

“My problem is what about those people on a fixed income that it goes up nine percent? How are they going to cover that?” Malcom said. “And it’s not just recyclers that are going to have to pay this penalty. It’s across the board. How is that fair? For one person, one entity, that’s on a contract, to keep their job. Makes no sense to me.”

Assembly member Cindi Lagoudakis said although other cart supporters weren’t at the meeting, she heard from several constituents who were also in favor of the carts.

“I have had many, many people and say they didn’t want to get into the public debate but they would prefer going to the carts,” Lagoudakis said. “I do think that people need to here that.”

Assembly member Jay Stanton Gregor supported the carts as a cost saving measure. He said that the blue bag contract was only ever supposed to be temporary as the borough worked towards something else. The contract with Rugers Trucking is for 15 months ending June 30.

Assembly member Bob Lynn voted no on both the resolution and the truck purchase because he didn’t like the idea of having two different programs running at once.

“In my opinion, we need to go one way or the other but not continue and break it up,” Lynn said. “It doesn’t make sense.”

Public Works Director Karl Hagerman assured the assembly that going with the carts will save customers the most money in the long run. He said giving them two options will hopefully keep everyone recycling.

“We’re going to save more money if we move forward with the carts,” Hagerman said. “The financial analysis is there.”

If the blue bag recycling continues in a new contract one thing that will most definitely change: the blue bags will no longer be recycled. Hagerman says it costs more money for the borough to keep the bags in the recycling stream. The new contract will require the bags to be emptied by the contractor at the baler facility and the bags themselves will be sent out with the trash to a landfill in Washington.

The borough has information on its website about the recycling program.