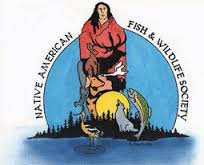 The Native American Fish and Wildlife Society meets in Juneau this week.

Tribal and other government officials and staff will discuss climate change, subsistence, Arctic policy and dozens of other issues.

Norman Jojola is natural resource manager for the Bureau of Indian Affairs’ Northern Pueblos Agency in New Mexico. He’s also one of the conference’s planners.

He says the conference will address the role of traditional knowledge in resource management.

Some sessions will focus on fish hatchery operations and lead ammunition poisoning wildlife. Others will cover more recent issues, such as policing fracking and dealing with meth labs.

Another focus area is cooperative management.

“These animals have no sense of boundaries. And they’re going to move wherever they want to move and whenever they want to move. It’s always good that you have this cooperative effort in managing these resources because if you don’t, then you’re just fighting each other,” he says.

The society began in the 1980s as a way to share information. That includes educating tribal youth about resource issues.