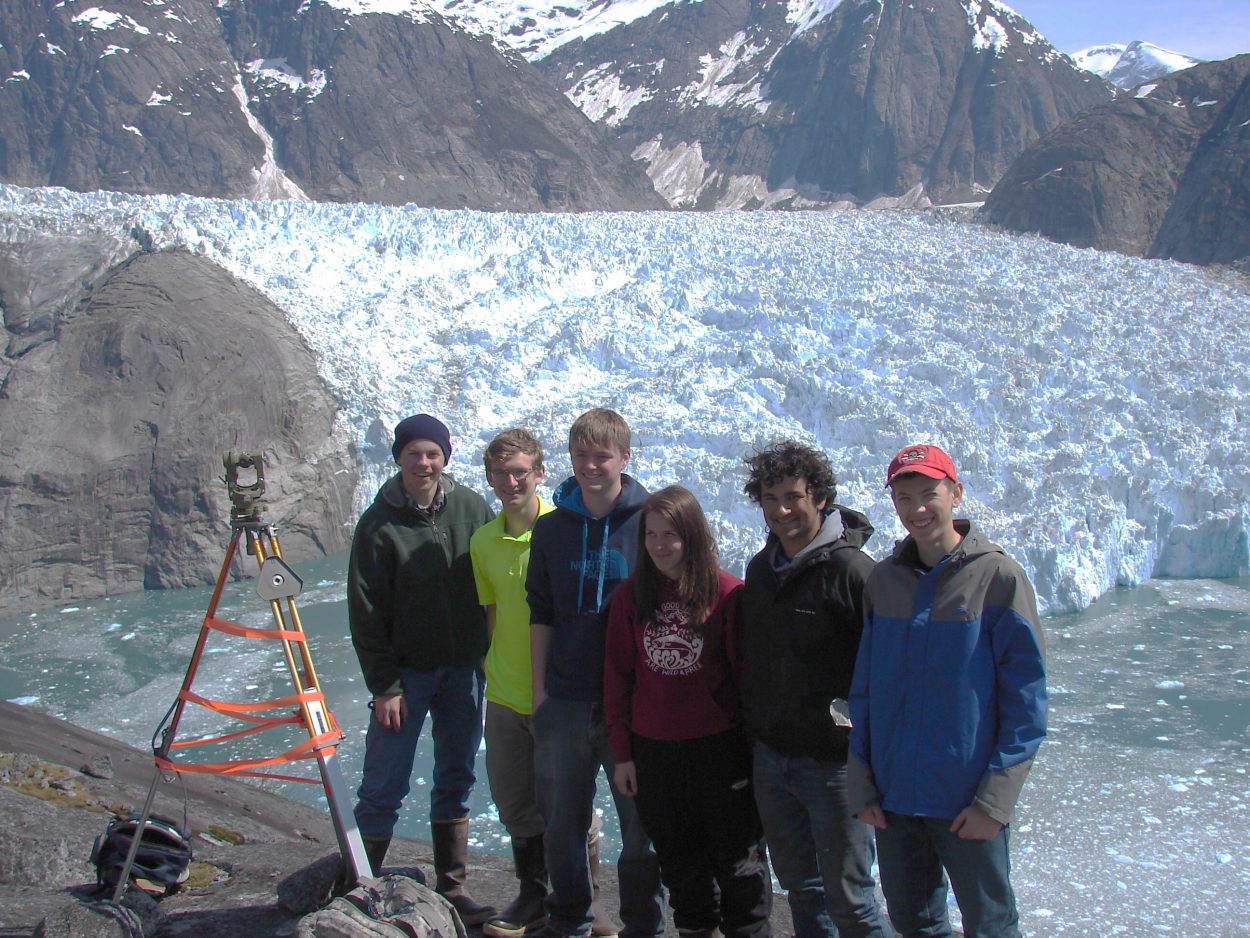 A team of student surveyors from Petersburg High School just completed an annual visit to the LeConte Glacier on the mainland near Petersburg. This is the 32nd year for the program to record the position of the terminus of the southernmost tidewater glacier in North America. The students have found little change in the location of ice face, no big retreat or advance again this year. They were able to verify their work for the first time using a satellite image.

High school teacher Paul Bowen started the annual survey with students in 1983, recording advances and retreats for the huge wall of ice. Local company Temsco Helicopters transports the teams of students to two fixed spots on the steep rock wall of the fjord. The surveying spots are 300 feet and 1000 feet above the ice berg filled water below.

“It’s scary and spectacular at the same time,” said PHS senior Aaron Murph. “You’re sitting way up on this kind of on a shallow cliff sort of. It’s kind of rolly and then it heads steep way down to the water. And you’re looking on the glacier. On the north side the sun hits you almost the entire day I think or most of the day that we were there. And if it’s not windy you just bake on the rock, it’s super nice. With a little bit of breeze coming off the glacier it’s a little chilly but if you’re wearing a dark coat it heats you right up. Great view of the glacier, all of the peaks. You can’t quite see out of the bay but you can definitely see all around, it’s really neat.” 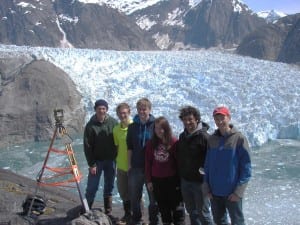 Students use surveying equipment to take measurements on points along the ice face from the two different spots, one on the north side and one on the south side of the bay. Kyle Hagerman explained the difficulty lies in making sure the two sets of students are sighting the same set of points. “What happens usually is they’ll choose a peak on the terminus of the glacier and then they’ll follow it down to the water’s edge. And so there’s all these peaks on the side of the glacier and all the different angles. So somebody could say well it’s the thing that looks like a V but there’s 25 Vs out there on the glacier. So we use a lot of pictures and take a lot of camera footage and point to the different pieces on a much closer scale and it makes finding the points a lot easier,” Hagerman said.

Another factor in taking those sightings is if the face of the ice is actively calving, breaking huge city-block size chunks off into the water below, or shooting up from beneath the water surface. The students say the glacier this year was not calving too much when they visited until after they had taken their measurements. Senior Ian Fleming does not think the terminus had changed a lot since the last time he saw it. “We actually would joke around because one of the features of the glacier, it’s almost like a cave, kindof. And that had been there the last time we were up there looking at the glacier. And actually there was joke about kayaking into it. And right when we finished that joke there was a shooter that shot up and closed up the cave.”

Another team member and senior Shalie Dahl has been on the survey team for three years and visited Leconte last year as well as this May. “It’s such a phenomenal thing to experience,” Dahl said. “And not many kids get to do this. And I get to say I that I got to go over and land on the rocks. You get to take a helicopter over, you’re just up there. I really enjoy surveying, it’s really fun. The whole thing it’s phenomenal, it’s a great experience.”

The students gathered back in school on a weeknight this month to plot their points and find results from this year’s visit. Skipper Erickson said the math can be a little scary at first. “But once you get going and know how to do it, it’s kind of simple, just trigonometry to find the angles,” Erickson said. “And from the two angles you get you get a point, which you can compare to the one from last year.”

The students found that the terminus has once again shown little change from last year’s position. The ice face has remained relatively stable in the past decade and a half, with a few small advances. It was more mobile in the 1990s, receding over a half mile in 1993, and continuing to shrink until 2000.

Victor Trautman took over the program from Paul Bowen during the 1990s. He’s teaching next year’s surveying team how to measure angles and compute points. Trautman uses a modern digital chalkboard called a smart board to show his work, but the students are using a piece of paper, protractor and pencil.

“Well technology is a wonderful thing,” Trautman said. “I have embraced it in my classroom because I got plugins. The cost of going to the glacier, we’re hanging on, thanks to Temsco, we’re hanging on. But if we were to go over there and a battery would go dead, we’re dead. We don’t have the funds to go back a second time and I wouldn’t want to ask Temsco to swallow that the second time either so we do everything old school.”

Technology is helping the program in a new way this year. A former student, Bob Davidson, works for Geo North LLC, a company that provides geographic information systems and satellite data. That company provided a high resolution satellite image of the glacier, taken this month. Trautman said that photo confirmed the surveying points mapped out by his students. “After we plotted our terminus and then we went and looked at the satellite image provided by North Geo, it matched down to one small notch. That was just kind of one of those serendipitous things, lets just keep doing points. And it matched. And what it does, I know I’ve been involved almost 20 years with this, this is definite proof that our methodology for our surveying works. And it’s visual proof which makes it really really nice.”

Trautman said he’s turning over the program to the district’s tech coordinator John Kludt-Painter. Kludt-Painter has some ideas for how technology can help the 32 year program, including things like that satellite image from Geo North. “We’ve used the Ipad for a number of years to track the points on the face of the glacier. This year we’ve pulled in some GoPro footage and we’re hoping maybe to extend that with UAVs in the future.”

Unmanned Aerial Vehicles could be used to capture video footage along the ice face. The student data along with photos goes onto the school’s website, joining the work of three decades of other PHS surveyors.