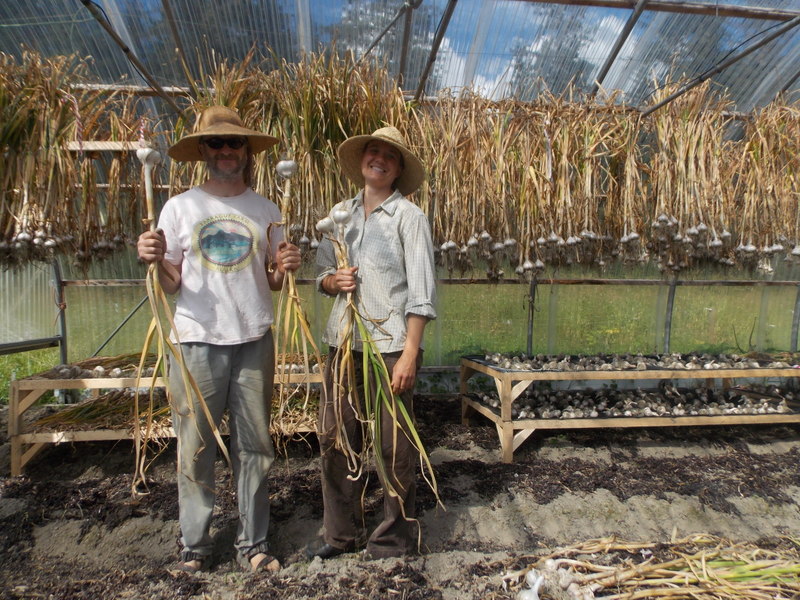 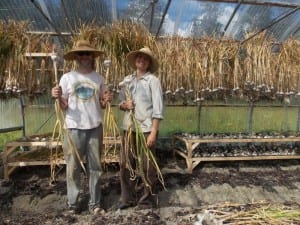 Bo Varsano and Marja Smets stand in front of their crop of gourment garlic.(Joe Sykes)

Making a living out of a lifestyle is many people’s dream.

At Farragut Farm, Bo Varsano and Marja Smets live off the grid, 4 hours by slow boat from Petersburg. It’s a good life but it’s hard to make money especially when there’s only one market to sell to in the summer and it’s only once every two weeks.

So they’re moving into another type of business that’s all the rage in Alaska right now. Nope….not marijuana. Gourmet garlic. Joe Sykes has the story.

When Bo Varsano moved to Farragut Bay 20 years ago, he built a homestead. Now that homestead is both his home and his income.

“We’ve just figured out a way to make a living at home in a remote place basically,” he says.

Together with his wife Marja Smets, he runs a farm which feeds the people of Petersburg in the summer months. Farragut is so out of the way it takes them four hours to transport their veggies to town and they can only leave with produce on the highest tide. This means they might make a living but it’s a struggle.

“What takes me a month to earn fishing, takes both of us the whole growing season,” he says.

And apart from the difficulty of transportation they are limited by the fact they only really have one market to sell to.

“Ever since we started we have asked ourselves: ‘There’s only 3000 people in Petersburg, is this really going to work?’ he says.

So Varsano realized what they really needed was a booster crop, something which would give them a supplemental income alongside the market.

He takes me into a greenhouse filled from top to bottom with big, chunky bulbs of garlic.

“So this stuff is being cured right now,” he tells me. 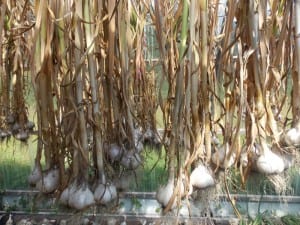 This is no supermarket quality garlic though. Varsano says right now people have a taste for gourmet.

“There’s a subculture that’s obsessed with garlic,” he says.

Garlic is planted in the fall and with mild winters Southeast has ideal conditions for garlic growing.

“If it’s done right Southeast Alaska garlic is as good as any on the planet. It’s beautiful stuff,” he says.

What makes garlic so attractive for Farragut farm is they can dry it, stick it in a sack and they don’t have to worry so much about the usual travails of transportation. And Varsano says because it’s hard to grow garlic well elsewhere in the state there’s a market in Alaska

“We can grow garlic more easily in Southeast Alaska than you can in the better agricultural areas in the interior,” he tells me.

And Mike Emmers, a farmer near Fairbanks who’s been growing garlic for about 15 years says while it’s hard to grow garlic up north, it a lure for customers.

“It’s certainly a very popular crop. When we announce that we have garlic at farmers markets it certainly brings everybody in,” he says.

For Emmers, though, the freezing winters mean it isn’t practical or profitable to grow garlic in the interior.

“There are more crops that are more forgiving than garlic,” he tells me.

But for Bo Varsano and Marja Smets the fact that garlic growing is unforgiving in the rest of Alaska is good news. They want to become Alaska’s biggest garlic growers and sell to northerners hungry for quality although Smets, who’s taking apart the pea fences at the other end of the farm, admits it is tempting to go for a higher yielding crop.

I ask why they haven’t thought of growing marijuana?

“That would be worthwhile more than garlic,” Smets replies, laughing.

But Varsano says while pot growing might be lucrative, it’s not the look he’s going for.

“I don’t wanna be the person who’s selling marijuana in Petersburg and lettuce too. We’re gonna go with garlic,” he tells me.

They’re going with garlic and the journey back to my lift home shows the difficulty of making a living based around just the Petersburg farmers market.

We squelch through a marshy bog, hike out over a mile long tide flat and I watch as Smets pulls out an inflatable boat from her backpack and struggles to blow it up. 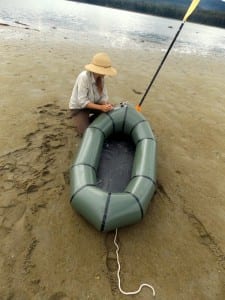 Marja Smets blows up her inflatable boat so she can get out to Farragut’s skiff. (Joe Sykes)

She paddles off to pick up the skiff and take me out to my ride. Soon she’ll be hoping those long hard journeys to market are made a little easier by a bumper crop of every lover’s least favorite cooking ingredient.