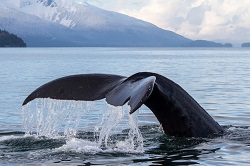 Researchers from Oregon State University’s Marine Mammal Institute returned to the waters of Frederick Sound and Stephens Passage in Southeast Alaska this month. It’s the second year of a two-year tagging program aimed at finding out more about the timing and nature of the annual migration of humpback whales from Southeast Alaska to the warm waters off Hawaii and Mexico.

This year the researchers spent another 10 days on the Petersburg-based motor vessel Northern Song attaching transmitting tags near Seymour Canal on Admiralty Island and near Petersburg. Joe Viechnicki spoke with research assistant Ladd Irvine for an update on the study.
Irvine says he plans to publish the results of the study but thinks the analysis and write up could take another year or two.