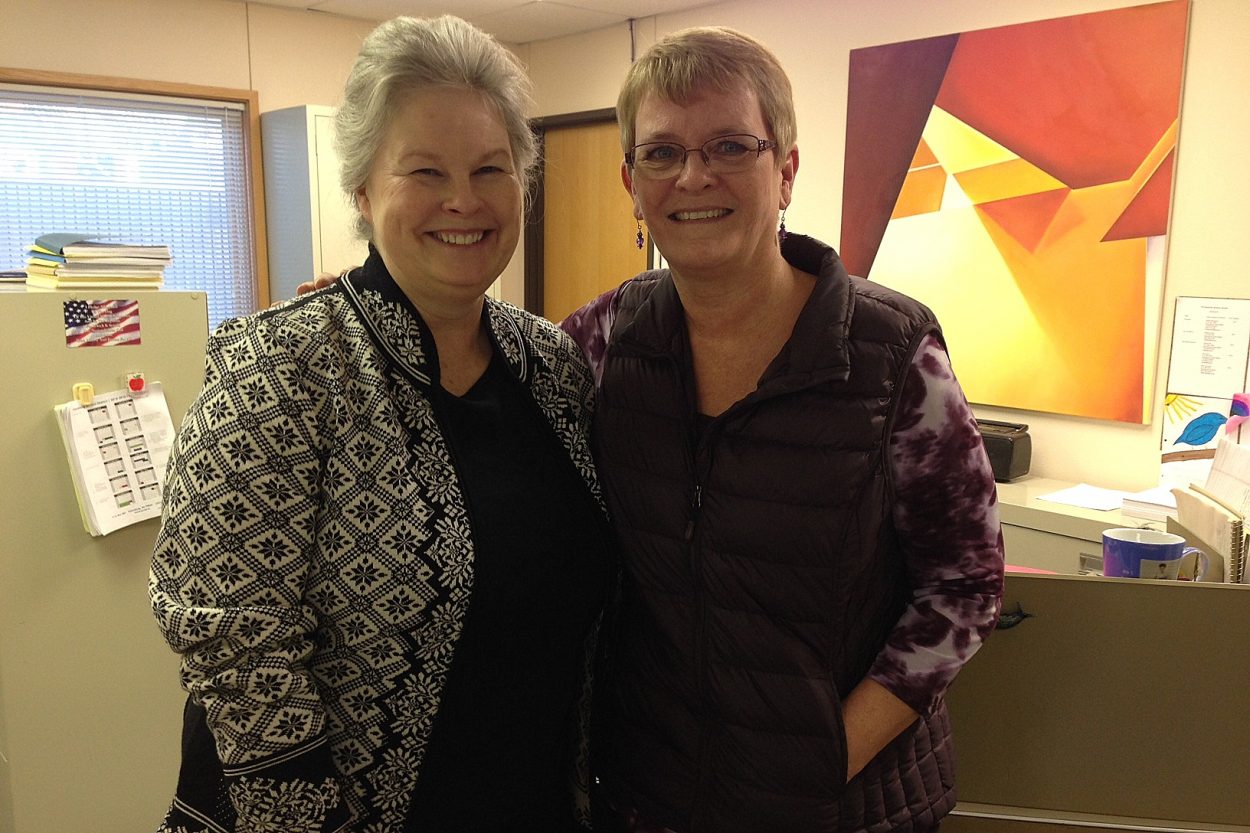 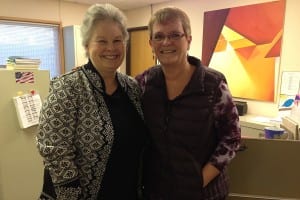 Petersburg School District is saying goodbye to Sharon Anderson, a long-time administrative assistant. Another long-time staffer, Irene Littleton, is taking her place. But as Angela Denning reports, there’s been some soul searching and a few tears for both of them to make the change.

When Sharon Anderson started working for the Petersburg School District there were no computers, she used a typewriter and sent everything out by mail. She was hired 26 years ago as the assistant to the superintendent and school board.

“I can still remember when we got our first fax machine and that opened up a whole new world,” Anderson said.

Some years later, Anderson got her first computer, which she says was so big it took up most of an office.

“And then now with Internet it’s just like a week later we can get things,” she said.

Sniggering in the background is Irene Littleton. She knows exactly what Anderson is talking about because she was working for the district at the same time. She was hired the same year as the assistant to the grade school principal.

“Sharon, your office was actually just a couple doors down from mine,” Littleton said.

That was before the district office building was built so both offices were located in the elementary school. Anderson and Littleton got to know each other well. In fact, Anderson remembers substituting for Littleton during lunchtime.

“And it was the worst, longest, horrible-est hour of my life. Every day,” Anderson said. “Kids would come in needing splinters out and all sorts of things and I’ve never worked that much around children and it was an experience.”

Littleton liked the grade school’s bustling environment. She said it made every day different.

“There’s a lot of action and a lot of funny stuff. Kids are hilarious,” Littleton said. “I stopped by there this morning to help out with a couple of things and it was hopping still.”

Lately, Littleton has been at the district office training to take over Anderson’s job. Anderson said it’s a little different.

“It’s more secretarial stuff that we do over here,” Littleton said. “And reports. LOTS of reports.”

There is also clerical work at the elementary. Littleton kept records and files for students and immunization reports for the state. But the office is also located near the school’s front door and there were always reasons for interruptions.

“Tons, constant interruptions,” said Littleton. “Some days you wonder how you got anything accomplished but it happens and it’s fun.”

Now the story gets a little bitter sweet. Both Littleton and Anderson have chosen to try something new after 26 years at their respective jobs. And, as Anderson said, it hasn’t been an easy decision.

“I’m old enough to retire now so I am choosing to retire,” Anderson said, her voice starting shake. “I will be moving back to Texas where my parents live and they’re getting older and I would love to be there for them.”

Anderson said that it’s a particularly hard time to leave the district to Littleton after all the transitions she’s seen it go through.

“She’s really lucky because we have an awesome board right now and awesome superintendent and they are hard working and really do their homework,” Anderson said. “So, there’s not a lot of coddling that you have to do with them. I mean it’s like the best of the times that I am leaving which is kind of sad. But it will be great for Irene and they’ll all really be a help to her.”

For Littleton, the decision to switch jobs from grade school secretary to the district office was a practical one. After a lot of thought, she decided the timing was right.

But the right decisions aren’t always easy. After so many years at the grade school Littleton had her job down tight.

“I will miss my job at the elementary, the students, the staff, they’re my family,” Littleton said through tears. “And it’s been a big transition for me after 26 years of doing the same thing and seeing the same people every day. It was my life and I appreciate every one of them so much.”

Littleton officially started at the district office at the first of the year and will be training with Anderson for a few weeks. Anderson plans to stick around Petersburg for a while longer.

“She will be a phone call away,” Littleton said, laughing. “And she’s not leaving town quite yet so I’m sure she’ll be stopping by to help me out once in a while.”

Taking over the reins at the elementary school’s office is Cena Worhatch who grew up in Petersburg since she was seven.