Petersburg’s harbor board is not excited about one part of the borough’s plan to fund a 10 million dollar remodel of the police station and municipal building. Some of the cost of the project could be repaid with raw fish tax revenue that the borough gets from the state and passes on to the harbor department.
Depending on the bids that come in from construction companies, the borough has to come up with roughly three and half million dollars to fund its top capital project priority. The local government already has about 6.5 million dollars in state grants and local funds set aside for the major renovation of the police station and borough offices. Borough staffers have come up with a proposal that would raise the remaining money needed, without bonding or requiring sales or property tax increases.

Finance director Jody Tow outlined the proposed funding plan before the harbor board Thursday. “As you can see 54 percent of the building remodel will be from state grants, 27 percent from the general fund and property development fund, one percent from the E911 surcharge fund and then five percent from land sale proceeds and the remaining 13 percent from a loan,” Tow explained.

Tow said in a worst case scenario both would continue to get raw fish tax. “My plan was the harbor would get 350,000 of the raw fish tax first. The general fund would still get their 250(000). I don’t know how we would make it in the budget without that. And then I would need 174,000 dollars a year to pay down the loan. And maybe if there was a bigger payment of raw fish tax that year, we could just make a balloon payment and get it done with,” she said, adding, “But again, that is worst case scenario.”

This past year the borough’s general fund received 250,000 dollars of the raw fish tax money, while the harbor got 570-thousand. The harbor’s payment has been as high as 950-thousand dollars. So the worst case scenario could mean a loss of revenue for the harbor.

Board member Bob Martin didn’t like the idea of using that raw fish tax. “No matter how you slice it, taking money in raw fish tax it’s gonna come out of reserves,” Martin said. “Then to build those back up it’s probably going to be on harbor rates and that’s based on the length of your boat, and the longer boats bring more tax in and it just doesn’t seem fair that the size of your boat should determine the proportion you’re paying for the new police station.” 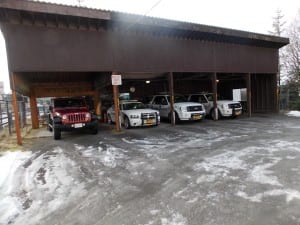 The harbor has been saving the raw fish tax money, to finance repair and replacement of docks and floats. The annual payment from the state comes from a three percent assessment on seafood landings in town. The amount changes depending on the local catch and prices for seafood.

Bangs and other board members along with commercial fishermen in the audience didn’t want to see the borough returning to raw fish tax to help fund more local projects. “We can’t carry on and try to build reserves if we don’t know if that money’s going to be there next year or not or if it’s going to be grabbed for some other project,” Bangs said. “And I think that’s what needs to be set in policy with the assembly.”

The harbor department has a long list of repair and replacement projects needed in the future, along with new construction and land purchases. Part of the borough’s waterfront master plan drafted last year recommended rate increases of 11 percent in the harbor, plus an additional two percent a year for the next decade in order to cover the cost of replacement projects.

Tow explained that the impact of the funding plan would be less money in the harbor’s reserves. “Fish tax amount that you get every year fluctuates so much each. Two years ago the harbor got 949,000 dollars and this year you got 570(000). Did you raise rates to make up for that? No. You didn’t because it’s just going into your reserves, it’s building up. So basically your reserve just isn’t going to build up as quickly.”

The borough’s funding plan is somewhat of a moving target at this point. The biggest unknown is the actual cost of the project, estimated at just under 10 million dollars. That number will be a little clearer once bids come in from construction companies and the assembly decides on awarding a contract. If the bids come in high or the borough adds on alternatives, that price could go up. Part of the funding is based on the sale of borough property, which is also an unknown at this point, but is estimated around a half million dollars. It could be that the size of the loan and the impact on raw fish tax money won’t be known until after the project’s completed, 15 months after it starts and the borough pays the contractor.

Kurt Wohlhueter, the borough assembly’s representative to the harbor board urged the board to vote on the issue and send a message with him back to the assembly “Most of the boat owners that contribute this extra funds into the general fund also pay property tax and also pay city sales tax which also goes into the general fund to pay for the infrastructure that every person in the city gets a chance to use,” Wohlhueter said. “So I believe that the fishing fleet has probably dis-proportionally contributed more money into the general fund than most citizens are. And that has been my biggest complaint all along.”

Board members wanted a commitment that the raw fish tax money would not be used for other projects. The board did not take action on the issue but asked the borough assembly representative to the harbor board Kurt Wohlhueter to carry that message back to the assembly. The assembly had other concerns about borrowing the money from the electric department but approved the funding plan in concept at their first meeting in January.