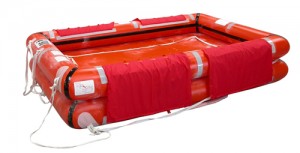 Commercial fishermen scrambling to buy life rafts for their boats this winter can rest a little easier. Congress has changed a new law that would have required life rafts for fishing boats traveling at least three miles off shore. KFSK’s Angela Denning reports:

Less than two weeks ago, U.S. Coast Guard officials were in Petersburg explaining new safety requirements announced in January: that fishing boats under 36 feet would have to carry life rafts if traveling more than three miles off shore. The law was supposed to take effect Feb. 26. Also, larger boats over 36 feet needed to upgrade their life rings or floats to life rafts by Nov. 1. But all that’s changed.

“It’s all been put on hold,” said Steve Ramp, Commercial Fishing Vessel Examiner for the Coast Guard based in Sitka. He said Congress decided to repeal the change in safety requirements earlier this month.

“For some reason Congress, the Senate and the House, put some riders on a Coast Guard appropriation bill to change the implementation of these increased survival craft rules,” Ramp said.

The President signed the Coast Guard Authorization Act of 2015 on Feb. 8. It now calls for a formal rule making process before any new regulations can take effect. Ramp said the process is quite lengthy. It includes publishing in the federal register, a public comment period, a review period, and then formalizing the law into a regulation.

“That process we anticipate will take a year or more,” said Ramp.

That means it will be at least a year before survival craft requirements will change for commercial fishermen.

“Everyone can continue to operate as they have prior to now,” Ramp said.

The survival raft law change could have affected hundreds of fishermen in Southeast. Such life rafts cost around $2,500. Fishermen who already spent the money could try returning the rafts or they could try to take legal action against the government, “for being forced to purchase equipment unnecessarily,” according to Megan O’Neil, the Executive Director of the Petersburg Vessel Owners Association.

O’Neil said she received news about repealing the life raft requirement Friday in an e-mail from the Coast Guard. But she says it’s ultimately up to the fishermen how they to respond to the news. She said she knew of a lot of fishermen who had already purchased rafts.

The local ship store is Piston and Rudder Services in Petersburg. The store had ordered about half a dozen of the rafts but President Mike Luhr said they can return them to the vendor. He said the ordering and rule change happened so fast it wasn’t that big of a deal for them.

Other fishermen ordered rafts from other vendors and Ramp said it’s up to them to return them.

“And that’s the tough part. Unfortunately, we were trying to give fishermen a heads up on the new rules so that they can stay compliant with the law and then the rules changed mid-stream on us,” said Ramp.

Still, Ramp believes the rafts could be required in the future anyway and he encourages fishermen to have them on board.

“It will make them operate in a safer situation if something happens to the boat if they have the device they bought rather than nothing but that’s a decision each fishermen’s going to have to make on their own that purchased one,” Ramp said.

Some fishermen have exemptions from the Coast Guard and can use a skiff or Zodiak in place of a life raft. Those exemptions are still good.

If fishermen have any questions about the safety requirements of their boats they can contact one of the three Coast Guard examiners in Southeast. That’s Steve Ramp in Sitka at 966-5620, Jim Paul in Ketchikan at 225-4496 Ext. 2233 or Dave Hydock in Juneau at 463-2448.