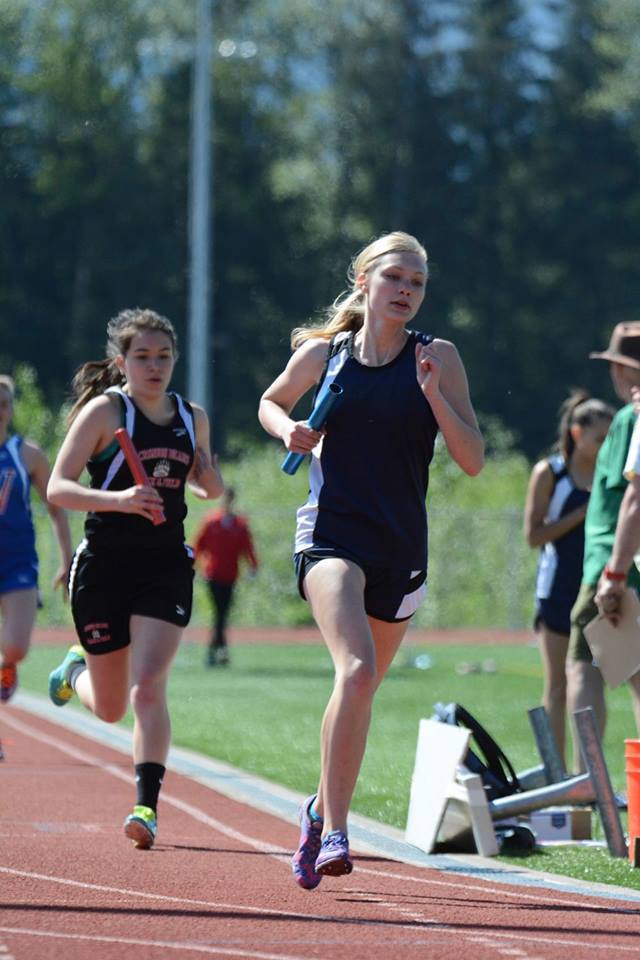 Sitka High School won both the boys and girls team titles for 1A, 2A and 3A schools. The Sitka boys scored 203 points to Petersburg’s 140 points. The Sitka girls had 232 points to Petersburg’s 156.
PHS coach Brad Taylor is a little hoarse from cheering on his athletes through the weekend. “Overall I was super impressed with everybody, the way they performed,” Taylor said. ‘Everybody showed up, either exceeded or met their previous mark, so I was very, very happy with everybody.”

The Vikings and Lady Vikings had a number of individual first place finishes. For the boys, Casey Bell took first in the 110 and 300 hurdles. Alan McCay was first at regions in the high jump. Ethan Cummins was first in the triple jump. Also the PHS 4×100 relay team of Stuart Medalen, Casey Bell, Axel Vides and Alan McCay won that event at the region meet. 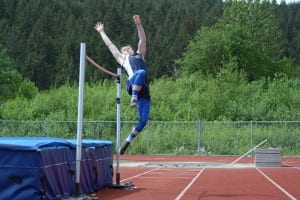 Alan McCay took first in the region in the high jump and is seeded second in state for that event. (Photo courtesy of Brad Taylor, Viking Track and Field)

Tucker Hagerman goes into the state meet as the second seed in the 800. He took second in that event to a Sitka runner last weekend. 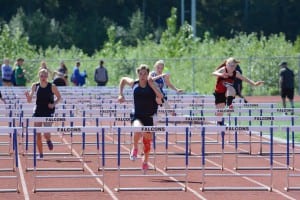 Kayleigh Eddy and Izabelle Ith were second and first in the 100 hurdles at Thunder Mountain High School. (Photo courtesy of Brad Taylor, Viking Track and Field)

For the girls, Izabelle Ith was first in four events, the 100 and 300 hurdles, the long jump and the triple jump. She’s the top seed at the state meet in both hurdle events and took state titles in all four of her events last year. Coach Taylor said she’s dealing with a sore knee. “So we kinda held her back in a couple of the, well quite a few of the jumps. But she’s looking stronger,” Taylor said. “Kayleigh Eddy had a great performance, she was second in the 100 meter hurdles and had a great meet as well,” he added. “Those distance girls were first in the 4×800 and 4×400. Outstanding performances in those and they’re seeded well at state as well.” 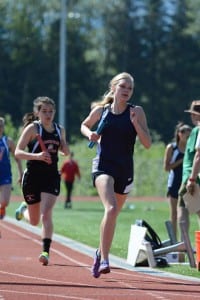 Kayleigh Eddy runs in a relay at the regional meet in Juneau. (Photo courtesy of Brad Taylor, Viking Track and Field)

In all 17 students qualified for the state meet. Last year, both boys and girls teams placed fourth. Taylor says he’s hoping to improve on that finish and maybe beat Sitka. However, he acknowledges there are no guarantees based on past performances.

“I looked at the results across the state,” he said. “Homer is very tough. Anchorage Christian is very tough. But you know we’re gonna go up and give it our best shot. And the boys team on paper looks very good as well. Casey Bell had an exceptional meet. Tucker Hagerman is seeded in the top 1-2. Casey’s seeded in the top 1-2. Alan in the high jump is seeded second and I know he can go higher. So it’s going to be fun to see what happens up there.”

The state track and field meet is this weekend at Dimond High School in Anchorage.