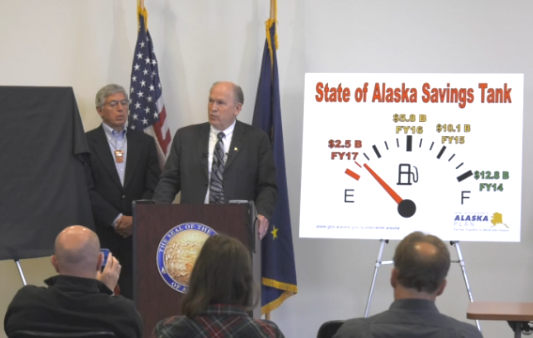 Gov. Bill Walker cut Permanent Fund dividends today to $1,000 per person, about half of the projected amount.

The cut was one of a series of reductions Walker made to lower the state’s budget by $1.5 billion.

Walker said he made the changes to reduce the amount of savings the state must spend to cover the budget. And he said he cut dividends to preserve PFDs into the future. The state is on track to exhaust its savings in four years without cuts.

He said he’ll take the blame for reducing PFDs. He expressed hope this will make it easier for lawmakers to approve his long-term fiscal plan for state government.

“So what I’ve tried to do is take away from them the risk that they may suffer in – at the polls, so that’s off the table,” Walker said. “And any excuses now – it’s just pure politics.”

Walker vetoed $1.29 billion from the budget.

The cuts include a $58 million reduction to schools, including shifting $30 million in bond reimbursement to local schools. The state will delay $430 million in oil and gas tax credits into future years. The University of Alaska will see a $10 million cut.

In addition to the vetoes, Walker delayed $250 million in road and bridge repairs, and he shut down two megaprojects: the Knik Arm bridge and the Susitna-Watana dam.

But Walker said the state can’t balance its budget only through cuts.

“We’re not cutting our way into prosperity,” Walker said. “We’re using the only tools we have available to us to do all we can to reduce the deficit.”

Anchorage Democratic Senator Bill Wielechowski says he’d like to see the Legislature override the PFD decision. Three-quarters of the 60 legislators must agree to successfully override any of the vetoes.

“The real losers today are working Alaskans, who are really going to suffer. A family of four is going to lose over four thousand dollars from this action. And I think there are better ways to do it,” Wielechowski said.

“I’m surprised the governor took this action and I’m going to encourage fellow legislators to override this veto.”

“It might have been nicer if early on, at the beginning of session, he would have came in with a smaller budget than what they originally proposed, so, you know, we’ll look at it, determine what’s the right thing to do and try to accomplish that,” Chenault said.

Walker signed the operating, mental health and capital budgets for the fiscal year that starts Friday. He also signed a bill that will restructure oil and gas tax credits, but not by as much as he wanted.