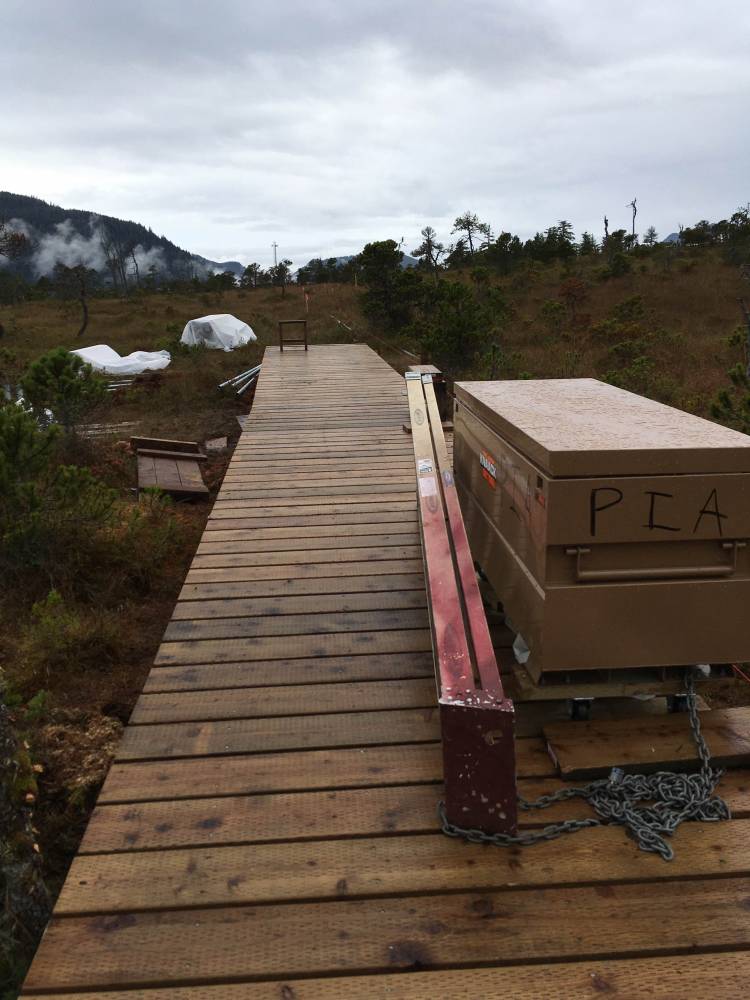 Petersburg’s Hungry Point trail got a little bit longer this summer, as workers brought power tools out into the muskeg to construct new boardwalk that will eventually connect to the main path. KFSK’s Abbey Collins walked the new trail segment for an update on the project’s progress.

The rumble of a generator gets louder as I approach the end of the boardwalk where a crew is working to extend the path, piece by piece. You can walk on the new boards for a while, but eventually I hit muskeg.

“We’re about halfway, a little over halfway,” says Stewart Ness, the foreman for the Hungry Point trail extension.

“Just over a thousand feet.”

Ness and two crew members are using the generator to power tools they brought out to build new boards and secure them over the bog. A pile driver, chop saw, drills.

“Piling goes on each end, under 25-foot sections that we have to drive in with the pile driver,” says Ness. “Get them reasonable close to around here. And then we cut them off. And then we’ve been putting on, well we have beams out there that are the foundation across like that. And then we put joists in lengthwise like that, and then we plank them over.”

Ness says the three-man crew is averaging three sections, or 24 feet, of boardwalk per day. Their boots slosh around in the muskeg as they work.

It’s a pretty long walk from the start of the trail to where they’re working, but tools help cut down transportation time.

“We have a four wheeler,” says Ness. “This thing and the generator we haul with the four wheeler.”

He’s pointing at the chop saw. They also use the machine to haul materials.

The project, a partnership between the Petersburg Indian Association and the Parks and Recreation Department, has been underway since November of last year, but this crew didn’t start working full time until this summer.

A separate team has been working this summer on the City Creek Trail near Sandy Beach.

Eventually, the boardwalk starting on Fourteenth Street will connect with the rest of the Hungry Point trail that runs past the ballfield, but that’s still a ways away. Work should be completed by September of next year, in 2017.