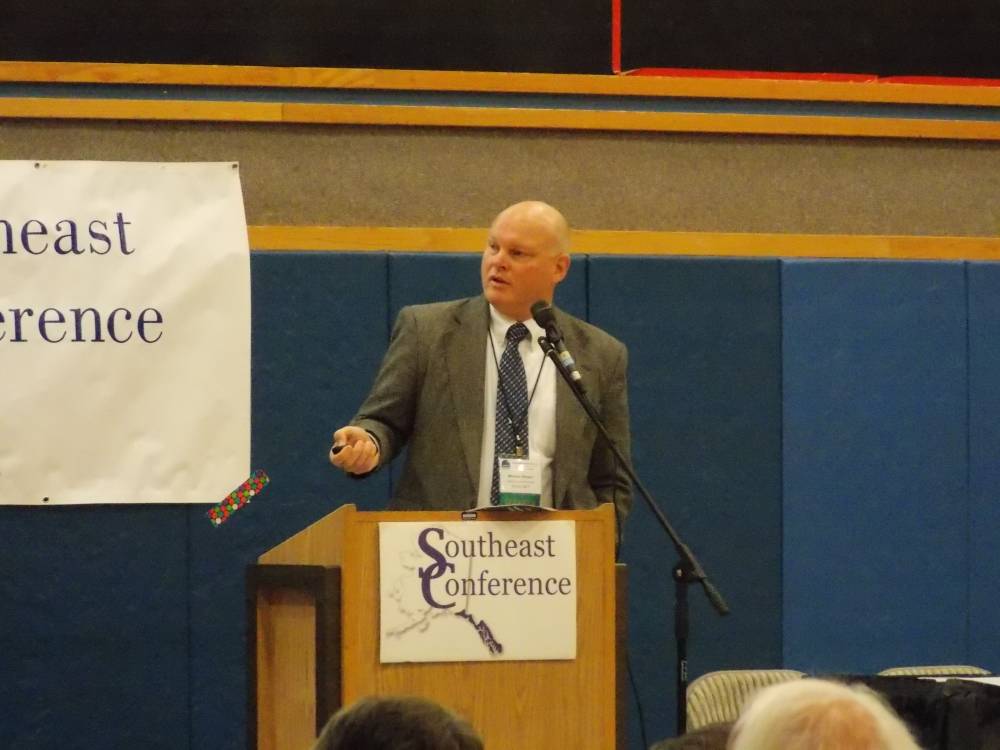 Business and community leaders in Southeast Alaska are looking into how other ferry systems are operated around the world and a different way of managing Alaska’s ferries. The annual meeting of Southeast Conference in Petersburg in September focused on the first steps of a project to reform the state ferry system, find efficiencies and keep ferries running between coastal communities despite the state’s budget crisis.

A Seattle engineering firm hired by Southeast Conference is making comparisons with other ferry systems from British Columbia, to New York, Scotland and Norway. Elliott Bay Design Group is considering a range of options from private companies, to public authorities, or public-private combinations. The firm’s John Waterhouse presented findings to the annual meeting of Southeast Conference. He explained that because of its scale, funding and vessels the Alaska Marine Highway is unique.

“So what works for some others because of their scale, their routes, their economics, may not work for the Marine Highway System as a one for one match,” Waterhouse said, adding, “But are there lessons we can learn?”

The company has been hired to look into possible reforms for Alaska ferries and is considering different public and private corporations and authorities already operating in Alaska. Those include the Alaska Railroad, a state corporation, or the Ketchikan shipyard, owned by the Alaska Industrial Development and Export Authority, but operated by a private company.

The consultants thought state ferries could continue in their current configuration as an agency of the state. But Elliott Bay is recommending several changes if that system is kept. Those are forward funding for the ferry system budget, transferring ferry system human resources from the Department of Administration to the Marine Highway and looking into other ways to boost revenue.

The company held a summit and listening session in Anchorage in August, looking at the role of the marine highway and starting to draft a new mission statement. Waterhouse explained the goal of trying to figure out what are core services of the system. “This is truly the moment for Alaska to take that step back and look at refreshing the whole relationship with its ferry system and creating the next, what I like to think of as the next 50 years of that system’s history,” he said.

Southeast Conference was formed in 1958 to lobby for creation of a ferry system in Southeast. Now the group is working with the state on reforms. The state this year signed an agreement with the regional organization to look for solutions to a system that has an aging fleet, turnover of leadership with each new administration and a state budget crisis among its challenges. 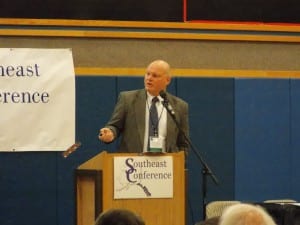 Department of Transportation Deputy Commissioner Mike Neussl said the Marine Highway saw a drop in revenue in the past fiscal year, of just under 13 percent, or around 12 million dollars. “I hear the word crisis a lot,” Neussl said. “I would like to not say that the Alaska Marine Highway is in crisis. That’s not good from a marketing perspective. It’s not good for business. We have a severe financial challenge. That’s what we need to deal with is the financial sustainability of this system.”

Neussl said the ferry system cut spending more than 15 and a half million dollars, or around 10 percent. That’s led to reduced service and taking boats off line, which means fewer passengers and fewer vehicles travelling on the ferries.

Alaska’s ferry system costs about 150-160 million dollars a year to operate, transports about 300-thousand people and moves about 100-thousand vehicles each year.

In his keynote speech to the group, Lieutenant Governor Byron Mallott reminded Southeast Conference of the importance of transportation connections for Alaskans no matter where they live. “Among the communities served are the smallest and most fragile in Alaska,” Mallott said. “And to be very blunt, some communities that are very different from other communities in our state. I submit to you that if the work you do does not meet those communities’ needs, you’ll have failed, simple as that.”

Southeast Conference members from around the region voiced frustration with a history of changing directions with planning for the Marine Highway. Joseph Reeves with the Ketchikan Indian Community was concerned with a loss of jobs with service reductions. “We don’t have very many job opportunities in Southeast Alaska,” Reeves said. “Our fishing is failing. Our logging is failing. Now our ferry institute, which is a major drive for major employment, is going to be reduced. How’s that going to help our economy in Southeast Alaska? Where everyone else thrives. I take offense at this administration and it’s not just this administration, every administration that has come before you, continuing to attack our road systems.” Reeves said cutting service and cutting jobs did not make sense to him.

With heavy fog in the area and a fall storm bearing down on Southeast Alaska, people hoping to get out of town after the meeting were told that the ferry Columbia was stopping in Petersburg Thursday on its way south. Myrna Gardner of the Central Council of Tlingit and Haida Indian Tribes of Alaska highlighted that important transportation option. “What I ask of the steering committee is that when you’re discussing models that you always remember that the heart and purpose is to provide our citizens with safe, reliable transportation on a consistent basis.”

Others commenting expressed frustration with scheduling decisions. Sitka Mayor Mim McConnell said the system is not working for her and said she would love to use the ferry again. She also thought use has dropped in her town. “In Sitka we’ve grown accustomed now to not having an adequate ferry service,” she said. “So we’ve moved on to doing other things, getting to where we need to go other ways because we know it probably isn’t going to be travelling on a day that we need it. And it’s just not frequent enough.” McConnell wanted the consultants not to put too much stock in recent ridership numbers and assume that was the level of demand in Southeast communities.

Ultimately the group hopes to make decisions on what constitutes basic service offered by the ferries and what routes and offerings could be cut from the system. Some pointed out that the impact that those kind of decisions have on ferry customers.

Juneau Assembly member Debbie White has a real estate company that operates in the northern Panhandle. She explained that people bought homes in Haines with the idea of commuting and working in Juneau for part of the week, based on a day boat schedule in Lynn Canal. “They made investment decisions, home buying decisions, based upon that schedule,” White said. “When those ferries got pulled, they ended up selling those homes and actually some of those people left Alaska. So just don’t forget that you’re playing with people’s lives.”

Southeast Conference staffers cautioned people about directing frustration toward the group’s steering committee or the consultants hired by the group. Executive Director Shelly Wright reminded the group that it was a decision they would make together.

The organization’s Robert Venables called it an historic opportunity. “I don’t know if this is the first time ever, it’s the only time I can think of where an administration such as the Walker-Mallott administration comes to an organization and says we want someone else other than government to take the lead on analyzing and coming up with a solution. And they’ve turned to Alaskans across the state and said, OK, Southeast Conference lead this statewide initiative and bring us the recommendations in an action plan.”

The steering committee is drafting a new mission statement for the ferry system and will be meeting again this fall to approve that and come up with a recommendation for a new governance structure. The hope is to bring that recommendation to the state legislature this upcoming session. A second phase of the work will look at a business and operating plan.

Southeast Conference plans to fund 100,000 dollars for the reform project and had raised about 66,000 of that. The state is contributing 250,000 dollars.