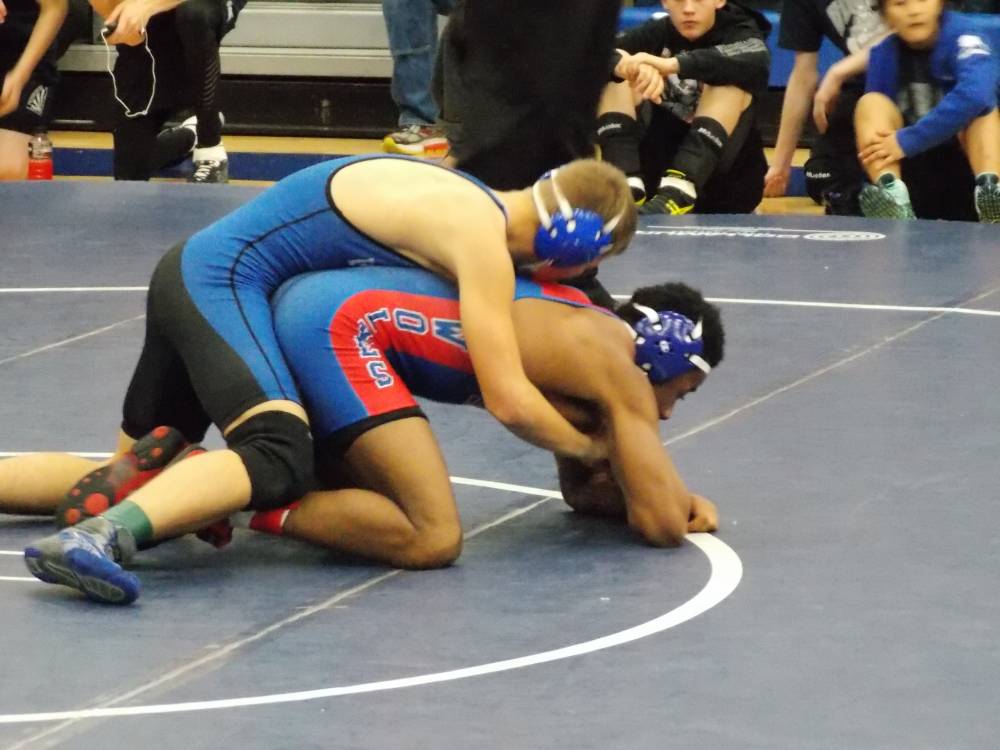 Petersburg High School’s wrestling team started off their season with the only home meet of the year against all the other high school teams in Southeast visiting.

Petersburg’s 15 wrestlers each had around five matches apiece between Friday and Saturday. 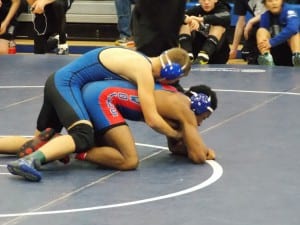 Koren Sperl rides a Sitka opponent during a match Friday.

The coaches didn’t keep team scores but tried to set up competitive matches. Assistant coach Rob Schwartz said with so many wrestlers in town, they didn’t have enough time to complete the final round of wrestling. Schwartz said he enjoyed every Petersburg match.

“You know Zac Christensen decided to come back out at 145 pounds and fought hard and I enjoyed his matches,” Schwartz said. “The freshmen stepped up and did a great job. Josh Coonrad’s a sophomore, he wrestled with us a little last year but he’s been coming to every practice. He did not win a match but he’s shown great improvement and we’re celebrating the struggle and the challenge and the work ethic and the attitude. I didn’t see anybody, I can tell and coach Van Swearingen can tell, you just look in their eyes and you know when they’ve given up. And we didn’t see any of that out of the guys. There was a little bit of timidity that we started to correct.”

Schwartz was happy with the quality of wrestling in the first week.

This year’s team has been practicing for several weeks. The Vikings are a mix of several upper-classmen along with younger wrestlers. Schwartz said that includes some hard-working freshmen. “I’m really pleased with the freshmen,”he said. “They’ve worked very hard. With good senior leadership, we have Buddy Stelmach, Ethan File and Nathaniel Lenhard as the seniors, they’ve been coming to every practice, working hard and they’ve been really good to the younger wrestlers but they have some respect for those younger wrestlers as well. The younger wrestlers have some talent, knowledge and skill and this weekend they kind of found their feet as far as…you know I showed them what they need to work on and also if they go out and are aggressive and have a relentless attack it pays off.”

The Vikings have this weekend off and then will wrestle in Ketchikan at the end of the month. The regional tournament is in Sitka the second weekend in December.