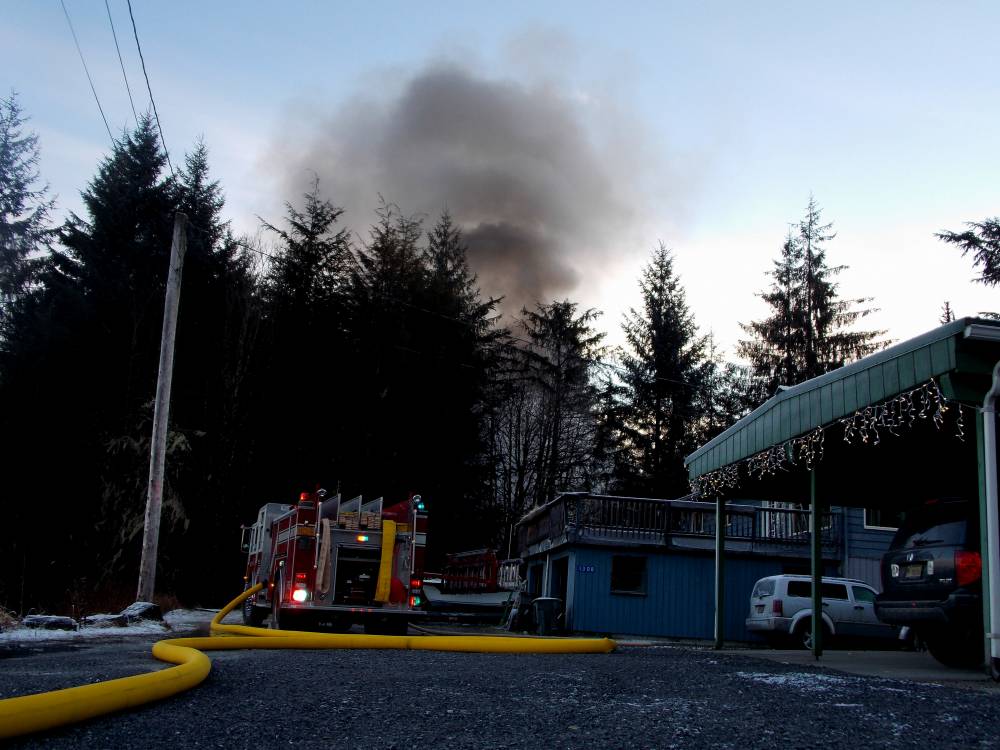 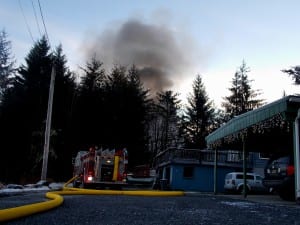 Dark smoke rose from the forest above the fire. Photo/Angela Denning

Petersburg volunteer fire fighters fought a fire in a former home for three hours this morning. The building, near Wrangell Avenue, was engulfed in flames by the time responders arrived around 8:30 a.m. KFSK’s Angela Denning reports:

The single family structure was located back in the woods behind a residence at 1312 N. Nordic Drive. The building was unoccupied at the time and was being used for storage. It was about 30 feet by 30 feet in size.

The Petersburg Fire Department responded to the scene with two fire trucks, an ambulance and 15 fire fighters.

Petersburg Volunteer Fire Department spokesperson Dave Berg was reached by cell phone at the scene. He said the fire had spread quickly. 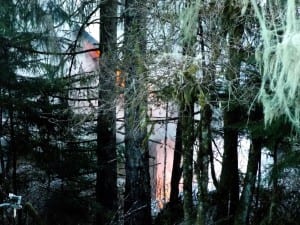 Flames could be seen through the trees. Photo/Angela Denning

“The fire was deeply set in the crawl space of the basement of the structure when we got here,” Berg said. “We were able to get initial attack lines, [a] large diameter attack line off of one of the trucks to the side of the structure and started to extinguish flames in the basement area. It seems to be where the fire started. It had extended up the walls and into the attic area. Not too much damage on the main floor but the attic was pretty well engulfed.”

From one of the trucks, workers used a large diameter hose, which they branched it into smaller ones which allowed them to start attacking the fire from inside. 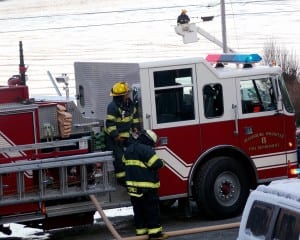 “There’s a significant amount of damage in the building and I suspect that it’s pretty much a total loss,” Berg said. “It’s kind of an older structure probably built in the 1920s as one of the original structures out here on North Nordic. Set back into the woods probably 150 yards from the street; an older structure that was just used for storage by the families that owned it.”

Although no one was living inside the building at the time of the fire there was power to it and a small amount of heat on. Berg says there was no real threat of the fire spreading. 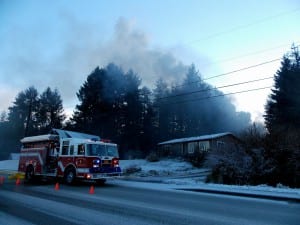 “There’s no structures around it. We had an oil tank and some propane that we were a little concerned about. We were able to keep those wet and the impending fire off of those,” Berg said. “The only other damage around the area could have been to some trees. There are some power lines that run in the back of the building, high tension power lines that run off of Wrangell Avenue that run over to Sandy Beach Road but the fire was contained to the building and didn’t get too much above the roof line.”

Berg says the cause of the fire might be electrical but it is still under investigation.