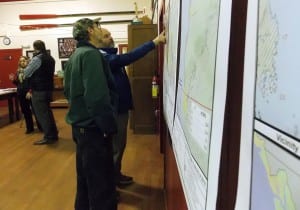 With a new U.S. Congress convening, Alaska’s Congressional Delegation has reintroduced a bill that would trade federal land for land owned by Alaska Mental Health Trust – including Ketchikan’s Deer Mountain.

A joint statement Thursday from Sens. Lisa Murkowski and Dan Sullivan, and Rep. Don Young announced that companion bills to accelerate the exchange have been filed.

The House and Senate bills are pretty much identical, according to Matt Shuckerow of Rep. Young’s office. He says Sen. Murkowski, as the chair of the Senate Energy and Natural Resources Committee, is the main force behind the effort, which Rep. Young fully supports.

“This is something that’s been ongoing for a number of years and the Congressman has certainly been supportive of this effort,” Young said. “As has been detailed by others and the Congressman, this is an effort by all the stakeholders involved to come to some sort of resolution.”

The legislation would put Mental Health Trust land on Deer Mountain and above homes in Petersburg under U.S. Forest Service control. In exchange, the Trust would receive federal land on Prince of Wales Island and in Ketchikan’s Shelter Cove area for logging.

Last summer, the Alaska Mental Health Trust Land Office announced that it planned to move forward with logging Deer Mountain and the Petersburg site if the land exchange wasn’t approved by early this month. After public outcry and questions about the TLO’s decision-making process, a final decision on that plan was delayed.

Shuckerow says the legislation is the same bill that had been introduced in the previous Congress. He says the delegation hopes it will be approved fairly quickly.

“It is a model for governance where there is local support,” Shuckerow said. “It’s not a top-down approach; it’s really a bottom-up approach from the communities involved and the stakeholders involved. That’s certainly a positive note in that regard, that it’s supported locally. That’s something we can relay to different members of Congress, that this is something that’s supported locally. Oftentimes that’s very helpful in moving legislation.”

Local governments in Ketchikan and Petersburg have approved resolutions in support of the land exchange, and there has been an effort to encourage individual residents to send letters of support.

In Thursday’s announcement, Murkowski states that the exchange will protect land that is valued by the communities, while providing other land for timber harvest. She says logging the sites on POW and in Shelter Cove will assist the timber industry, and make money for mental health services in Alaska.

The U.S. Forest Service and the Trust already have agreed to the land exchange. The legislation would speed up the process.