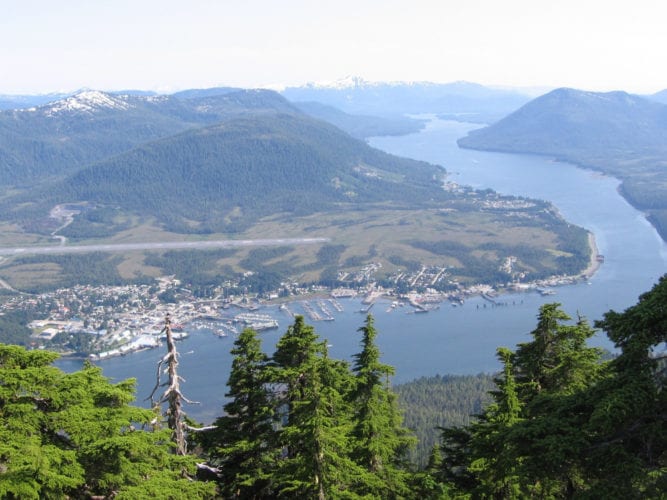 The Alaska Mental Health Trust owns land on the hillside south of Petersburg, near the top right of this photo. (KFSK file photo)

Alaska Mental Health Trust Land Office representatives faced some tough questions about a proposed land exchange between the Trust and the U.S. Forest Service in Petersburg last week. The Mental Health Trust Authority owns lands in Petersburg it wants to swap for Tongass National Forest acreage elsewhere in the region. Resulting timber sales would raise money for the Trust.

Mental Health is hoping to complete a swap that’s been under discussion for a decade. The state corporation is asking for about 20 thousand acres of Tongass National Forest land at Shelter Cove near Ketchikan and other parcels near Naukati and Hollis on Prince of Wales Island.

In exchange, the Trust would give up a total of around 18 thousand acres. Those lands are on the hillside above Mitkof Highway south of downtown Petersburg along with parcels on Deer Mountain and on Gravina Island in Ketchikan. Other Mental Health lands that would go the federal government are near Juneau, Wrangell, Sitka and Meyers Chuck along with a parcel on Kuiu Island.

“Get out of your back yard and be a little bit more remote,” said Paul Slenkamp, senior resource manager with the Trust Land Office. That office is part of the Alaska Department of Natural Resources and manages lands for the Authority. He presented arguments for the exchange to about a dozen people in Petersburg.

“We believe this will help protect jobs both in the timber industry, which is very beleaguered which you may be aware of, and also in the tourism industry by preserving some of the backdrops and viewsheds of the local communities, specifically Ketchikan and Petersburg,” Slenkamp said. “And then also there’s also some watersheds and viewsheds and old growth timber along the Inside Passage that will be retained through this transaction.”

The Land Office manages 130,000 acres of timber land statewide for the Trust. Money generated off that and other acreage goes to the Mental Health Trust Authority, which has been paying out around 20 million dollars annually for mental health services around Alaska.

Last year Trust officials said they’d be going forward with logging the lands in Ketchikan and Petersburg if legislation to enact the exchange did not pass Congress by mid-January of this year. They later backed off that deadline and have focused on getting that legislation passed at both the state and federal levels.

Land office CEO John Morrison gave an update on those pieces of legislation. “We understand that we have very good chances of imminent passage at the federal level. There was a first hearing in the Senate today at the state level for SB 88. So the state process appears to moving along. We don’t sense any resistance at the state level. And so we’re in constant contact with the timber community to see what their status is and so we don’t have a specific deadlines at the moment other than it is very important that both of these bills pass this session.”

The Mitkof Highway Homeowners Association formed in late 2005 to oppose logging on the steep hillside above their homes south of Petersburg after the Trust Land Office announced plans to go forward with timber sales. The group has argued that logging would increase the chance of landslides on that slope and have documented slides that have already occurred in that area around Mitkof Highway and the electrical transmission line bringing power to Petersburg.

Some of those residents questioned the officials about how they could even consider logging there, given the risk of landslides.

“I understand,” Morrison responded. “I wouldn’t want to live at the bottom of a slide area or have something affect the area above my house. I certainly wouldn’t want to do something that endangered people below our house, or below land that we owned. So we certainly are taking those things into consideration. And as I said, we are committing significant resources to moving this exchange forward including coming down for meetings like this and working with a number of interested parties.”

Petersburg resident Becky Knight is opposing the exchange and instead thinks the land should be sold to the federal government. Knight points to an email from the Trust’s Slenkamp last August that gave an update on the land exchange and said the Trust was in final negotiations with Viking Lumber for purchase of all timber on Prince of Wales associated with the proposed exchange.

Knight questioned the Trust officials about how they could be negotiating to sell timber before the Trust owned that timber.

“I can still say that no we do not have a contract although we are talking with all members of the timber community as far as supply,” Slenkamp said.

“I can unequivocally say that we don’t have a contract and that we were misquoted the last time we were here,” said Morrison.

“Well, can you explain what final negotiations means?” Knight asked.

“Well at the time and we still are… we don’t own the timber yet,” Slenkamp said. “And I know that’s exactly what we said. We cannot sell something we don’t own. And when we have ownership of it we will negotiate with…”

“We’ll go through our process to dispose of the timber,” interjected Morrison.

Trust officials anticipate 40 million to 60 million dollars in timber sale revenue from the lands near Ketchikan and on Prince of Wales Island during the next two decades if the land swap is completed.

Following the meeting, the Mitkof Highway Homeowners Association’s Ed Wood said the group is hopeful the exchange goes through. “It’s kinda disappointing the landslide issue isn’t really front and center of being discussed,” Wood said. “That’s our interest in this. Other than that we’ve just been waiting to see.”

Petersburg’s borough assembly sent a letter last September urging the Trust to go forward with the exchange instead of logging that land.