Petersburg assembly gets look at proposed budget for local utilities 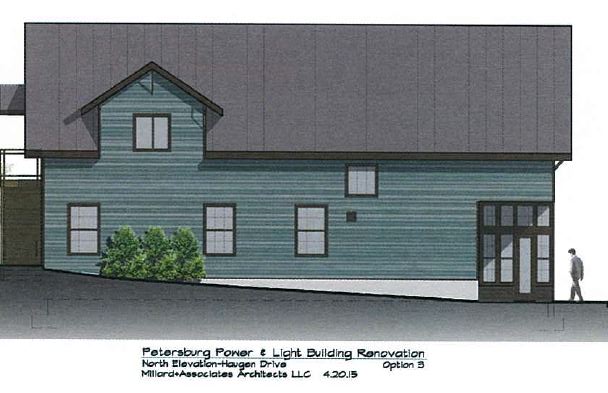 Petersburg Municipal Power and Light plans a remodel of the department’s downtown building along with expansion of the parking lot behind that building.

Petersburg’s borough assembly last week heard about planned rate increases for some of the local utilities along with infrastructure upgrades planned for the borough’s enterprise funds. It was a chance for the assembly to learn more about projects and challenges for the part of local government supported mostly by customer fees and not local tax revenue.

The assembly has started its review of proposed borough spending plans for the fiscal year that starts in July. At work session in March the assembly combed through the portion of the borough budget that covers enterprise funds, namely the local electric utility, water, sewer and garbage service along with the harbor department, elderly housing and assisted living facilities.

“They are paying and collecting for themselves,” explained Jody Tow, the borough’s finance director. “They’re not subsidized by taxes, with the exception of the assisted living of course. And they’re just operating like a regular business.”

In the upcoming year the cost is going up for many of those services. One exception is in the electrical department, which does not have a rate increase planned. Earlier this year, Petersburg Municipal Power and Light even looked at offering a reduced rate for the hospital, schools and borough government in order to spend down a large reserve of cash. However, the assembly has been more interested in spending that money on making improvements to the local electrical grid. That reduced rate is not in the electrical department’s budget for the upcoming year. Instead Power and Light plans to be doing projects like upgrading street lights, mapping the electrical system and upgrading its buildings. To help complete those projects, the department also plans to hire another lineman for a position that’s gone unfilled in recent years.

Borough manager Steve Giesbrecht wanted to clarify that the money cannot be spent in other departments. “Power and light’s self-funded and that money cannot be used except under some very narrow conditions in the general fund,” Giesbrecht said. “The general fund is what people are paying from a standpoint of taxes, sales taxes and property taxes. That’s the area that we have the biggest challenge facing us. It’s not in the enterprise funds. But there is a perception among people well borough’s got a lot of money if they can renovate his building or do all these projects or hire another lineman that literally with overtime will make more than pretty much all of us.”

The biggest projects planned by the electric department are the more than half million dollar remodel of the downtown building given the green light by the assembly earlier this year. Power and light superintendent Joe Nelson also is planning to spend another 775,000 dollars to purchase property and create a parking lot between the electric building and Hammer Slough. Nelson said he has not approached anyone yet about that purchase and called that project just an idea.

“The idea being that we would purchase that property,” Nelson told the assembly. “We are moving the 350 generator which is taking up a bunch of space back there so that space becomes available and then by relocating our skimmer shed we open up quite an area there. So what this project does is that it opens up that area. It would be regraded. There would be some retaining wall back against the hill there where that path is.” Nelson said the project would also mean clearing trees from that area to keep falling branches away from a transformer on that property. Other planned work is to clear trees along the Crystal Lake hydro penstock and continuing an ongoing upgrade of local power lines.

Rate hikes are already scheduled in the other utilities. Customers on borough water will see a two percent increase on their water bills in July. Annual increases were approved for water sewer and garbage service in 2012 to cover the cost of projects in those departments. The biggest new project in the water department is repair work on the City Creek dam, the older and smaller of the two borough reservoirs. The borough’s main water source is at Cabin Creek.

“It’s a very good idea to maintain that backup that secondary water source for our residents if we have a maintenance issue on Cabin Creek or just general ongoing preventative maintenance,” public works director Karl Hagerman explained. “We’re gonna have annual shutdowns and we need a water source so it’s important to keep that dam in good shape.”

Local utilities also expect to see little increase in revenues despite rates going up. Hagerman explained that in the water department that’s because of the loss of revenue from one of the town’s two canneries. “This is a conservative revenue budget on the commercial sales side because of Ocean Beauty saying they are not going to operate. That’s one thing with the water department and the sanitation budget we’ll talk about later what the canneries do highly affect our revenues. Waste water department not so much, pretty steady revenue source but it definitely does affect the water department.”

A 4.5 percent rate increase is also budgeted for sewer customers and a 2 percent increase for garbage collection as well. The harbors are budgeting to remove the 10 percent discount for paying moorage in advance. That change is before the assembly this spring. The harbor department plans to spend money on security cameras, maintenance on South Harbor floats and rebuilding the dock between the harbor office and Trident Seafoods, among other projects.

Rates are also going up small amounts in June for elderly housing independent living residents and in the fall of this year for assisted living residents. The borough plans to convert to electric boilers at Mountain View Manor’s elderly housing building and also need to replace parts of the fire alarm and suppression system at Mountain View manor. And the money that’s paid from the general fund to assisted living is likely to be increased this year to 80,000 to help that enterprise fund cover its costs.

Manager Giesbrecht called that a big issue for the borough’s budget. “We’re gonna probably have to pull more money from the general fund to balance assisted living’s budget. The problem is, the general fund’s balanced to basically zero at this point meaning we take any more money out of the general fund we’re gonna be negative and we’re running out of ways to balance that. So we’re gonna potentially look at having to raise taxes to make this subsidy continue to make this work or cutting services elsewhere which is hard on other departments as well.”

Borough staff don’t expect to unveil a proposed budget for the general fund until sometime in April.

The assembly also looked at the budget for the motor pool. That’s a replacement fund that each borough department pays into to spread out the cost of expensive vehicle replacements. Staffers reported there’s over four million dollars built up in that fund. Public works director Hagerman said payments into that fund have been decreased in recent years.

“Overall I think the motor pool is extremely healthy right now,” Hagerman said. “And the fact that we can drop those contribution rates is helping out the general fund departments quite a bit.”