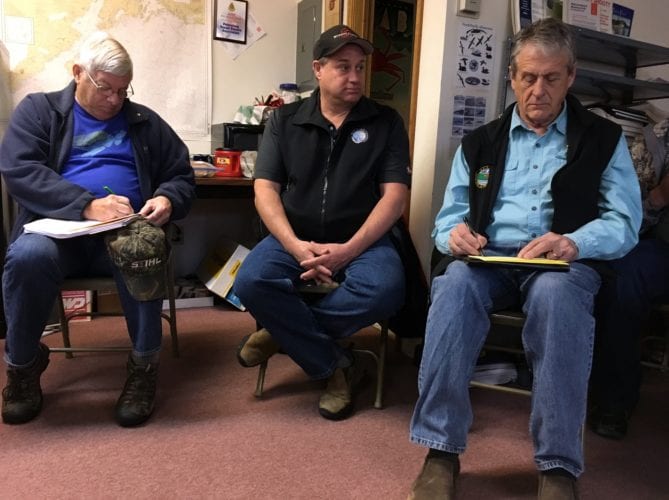 Two of Alaska’s top Fish and Game leaders visited Petersburg April 28 to hear from local fishermen. As KFSK’s Angela Denning reports, they discussed a variety of topics including state budget cuts to herring management and the federal observer program.

About two dozen fishermen are packed into the office of the Petersburg Vessel Owner’s Association. A table is in the middle of the room but nearly all of the fishermen are sitting in chairs that line the walls. Among the makeshift circle is Sam Cotten, the Commissioner of Fish and Game and Scott Kelley, the Director of the Division of Commercial Fisheries.

Cotten tells the group that in general, the Department of Fish and Game, has a lot of different funding sources except for the Division of Commercial Fisheries, which is always at risk.

The fishermen ask about recent cuts to herring management. The Division of Commercial Fisheries trimmed down its herring budget by $210,000.

The state won’t open areas to commercial herring fishing unless there are spawn assessments being done. Some fishermen want to know if the state could use other methods without relying on expensive divers.

Long-time fisherman Mickey Knight suggests using aerial surveys for mapping spawn like they used to do years ago. Here’s a back and forth between him and Director Scott Kelley.

Kelley says they need the diving assessments because just estimating the mileage of spawn from the air doesn’t work. He uses the herring season in Sitka as an example. He says the preliminary data they are gathering from divers now is that although there were miles and miles of spawn this year it was thinly spread.

“So, that’s the problem,” Kelley says. “If we don’t go look and if we just manage it on mileage then we would grossly over forecast and over harvest.”

The only Southeast herring stocks being assessed right now are Craig and Sitka, which are both seine fisheries. Kelley says he has to weigh the value of the fisheries when his division is trying to make cuts. Other areas like Ketchikan and Seymour Canal just aren’t as valuable commercially.

“We’re not in disagreement. I want to dive those areas,” Kelley says. “We will do everything we can to dive those areas. I understand completely the unfairness of bagging out on the set gillnet fisheries and saving the other two. I totally get that.”

Besides herring, the local fishermen also want to discuss the observer program for long liners of halibut and sable fish. It’s not a hugely popular program with fishermen because it requires them to take along a designated person to watch the fishing and document the catches. And fishermen help pay for the program through fees. They’re wondering why isn’t the program getting cut? And why are they having to fill out surveys on their catches and get observed?

The observer program is run through the federal North Pacific Management Council. Commissioner Sam Cotten is a voting member of the council. He tells the fishermen that they’ve gotten good data from the program. He says halibut fishermen catch other species too and they want to keep track of that.

“We’re getting good information now from the long-line fleet that we weren’t getting before,” Cotten says.

The local fishermen say that as long liners they have less bycatch than the trawlers in the Gulf of Alaska, which drag the bottom of the ocean. They say their fleet should have fewer observers and the trawlers should have more. And some say they don’t mind paying.

“I don’t mind paying for it because those fish up there are our future. They come here,” one fisherman says.

Cotten acknowledges that only 18 percent of trawlers in the Gulf of Alaska are being observed. He says he’d like increase that but it’s very expensive–about $1,000 a day. He says he’d like to pursue using more electronic monitoring or video cameras to replace observers but it’s a slow process because it involves National Marine Fisheries Service.

Cotten says the observer program not only gets data on the catches but compliance with rules.

But the future of the fisheries will depend on budgets. And Scott Kelley expresses some hope. He tells the fishermen that he’s noticed a different mood in the Legislature this year. He says last year law makers wanted to know what could be cut where but this year he’s seeing more of a “hold steady” approach.