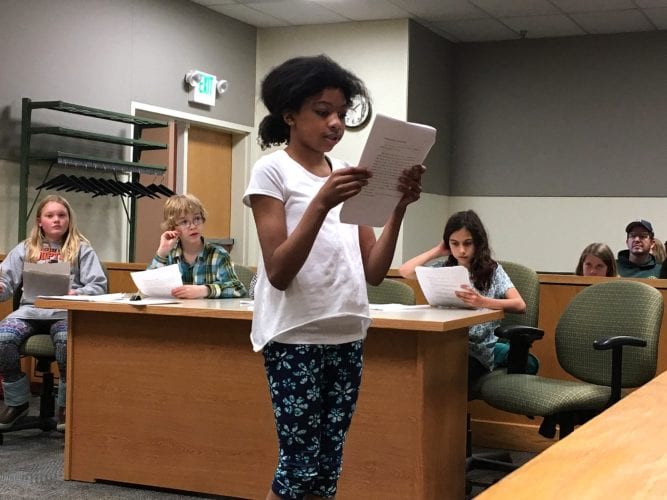 Fifth graders from Petersburg’s Stedman Elementary School got a first-hand look at what goes on inside a courthouse last week. A mock trial “The State of Alaska versus Goldie Locks” was performed so the students could learn the roles of the jury, attorneys, and witnesses. KFSK’s Angela Denning reports:


The Petersburg court room is packed. Students fill the jury box. Others sit out in the gallery as witnesses. There’s a team of district attorneys sitting at a table and a team of defense lawyers at another table.

5th grader, Sophia Lyle, is sitting at the judge’s bench. She reads aloud the counts against Goldie Locks. 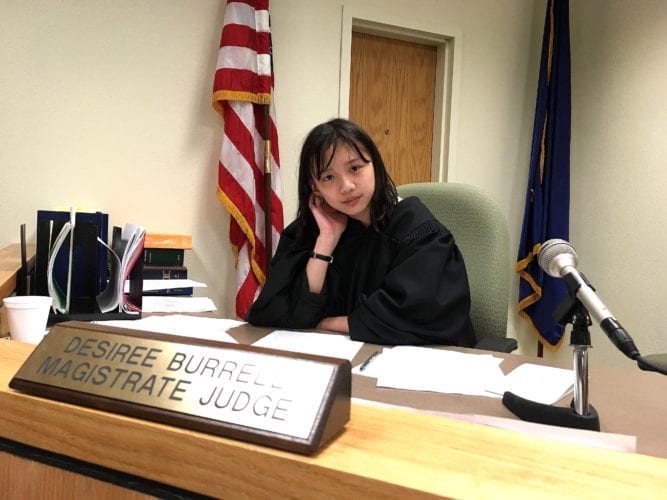 Sophia Lyle plays the role of the judge in the 5th grader mock trial. Photo/Angela Denning

The State of Alaska is charging Goldie Locks with two misdemeanors, criminal trespass in the first degree for going into the bears’ home and criminal mischief in the third degree for breaking baby bear’s chair on purpose.

The trial begins with several witnesses being called up to testify by district attorneys. Mama bear is asked questions about the character of her family.

“Isn’t it true that Papa Bear has a bad temper?” one attorney asks.

The defense team argues that Goldie Locks is just a little girl who is scared of storms and that’s why she went into the bear’s home, because it was an emergency.

Goldie Locks is questioned by defense attorney, Zander Jones, who asks, “Do you think it would be okay to just go in to get out of the rain?”

One of the defense lawyers questions baby bear about his relationship with Goldie Locks. 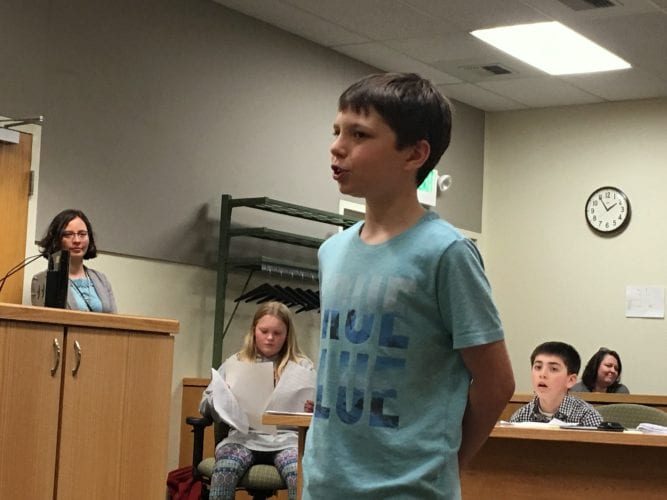 “Isn’t it true that the reason that you don’t play with Goldie is that she’s a better athlete than you?”

Petersburg Magistrate, Desi Burrell, has been assisting the students throughout the mock trial.

“You can take these instructions back with you. I’m going to hand them to the bailiff along with a verdict form,” Burrell says.

The jury leaves the courtroom to deliberate in private. While the jury is gone, Burrell takes questions from the remaining students.

“Are these [trials] usually this long?” one student asks her.

Burrell says there is usually more evidence presented and expert witnesses called. But for the most part, she says, the mock trial is how it’s done.

“This drill today, this mock trial today, is really kind of how it happens,” she says. 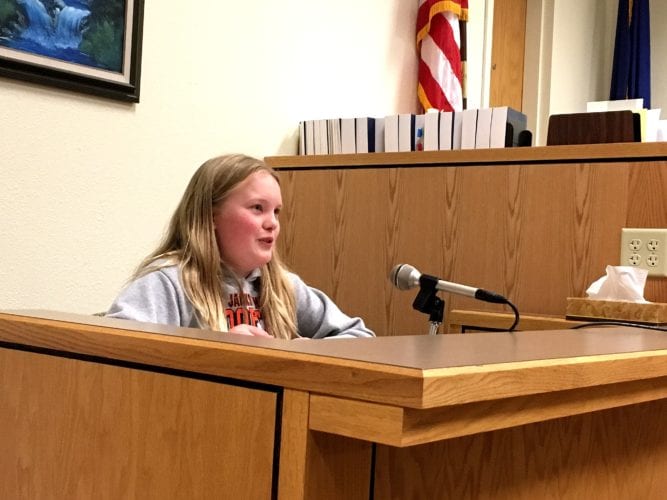 The jury reenters the courtroom and takes their seats in the jury box. The jury’s foreman reads the verdict. They find Goldie Locks guilty of trespassing but not guilty of criminal mischief for breaking the chair.

Burrell tells the group that their job is complete. The students have done their civic duty well and now have a better understanding of how a courtroom works.