Smoke can be seen coming from boats on fire Sunday at a marina near Craig. Photo/ Everett Athorp

Fires on Prince of Wales Island over the weekend, but as of Sunday afternoon there were no reports of injuries related to the incidents.

The first was at about 6 p.m. Saturday in Naukati. According to the Alaska State Troopers, a community-owned building was destroyed by a suspicious fire.

Then early Sunday morning, three commercial fishing vessels burned while docked at a marina in North Cove in Craig.

The three boats were the 57-foot Seaborn, a longliner, and two seine boats, the 53-foot Pacific Lady and the 58-foot Julia Kae. The fire started at around 3:30 a.m. Sunday, and was contained by the City of Craig harbormaster and fire departments.

Troopers say that Saturday’s Naukati fire was suspiciously started in or near the building. A nearby resident saw smoke coming from the building, and with the help of other community members was able to contain the fire to the building and immediate surrounding area. 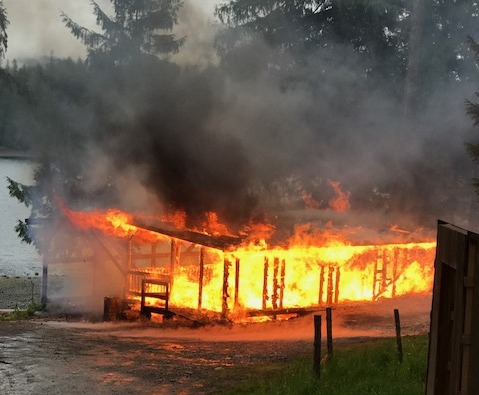 The uninsured building was declared a total loss, according to Troopers. Estimated damages are $10,000.

The Naukati fire follows another suspected arson case last week on Prince of Wales. On Tuesday night, someone set fire to a car parked at a boat launch near Klawock.

If anyone has any information about the suspected arson cases, they can call Alaska State Troopers at (907) 826-2918.