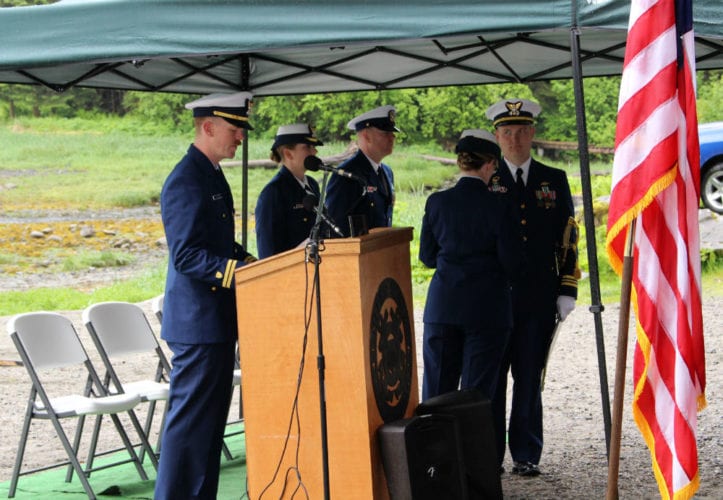 It’s a misty Friday morning at the park, and today the picnic shelter is filled with rows of flat white hats, starched blue uniforms, shiny black shoes, and even a few swords and scabbards. Dozens of Coast Guard personnel, family, and residents are gathered here for the tradition-steeped Change of Command Ceremony of the Anacapa.

“Lt. Commander Vermeer is a superb example of the kind of leadership that the coast guard needs in service. He has exceeded all of the Coast Guard’s expectations for a successful command tour,” said Greene.

Greene highlighted the accomplishments of Vermeer during his two years in charge, and how he met the challenges of keeping an aging cutter “mission-capable.” Under his command, the Anacapa crew sailed on more than 20 patrols, boarded over 80 vessels, and conducted six search and rescue missions.

The Captain also stressed Vermeer’s dedication to his crew members and their families in this remote posting, and his love of life aboard.

“Lt. Commander Vermeer is a true cutterman. And one might even say that cutter life is his bailiwick,” Greene said.

Greene then welcomed the Anacapa’s new leader, Lt. Rachel Kent, with a reminder and warning about the weight of her role.

“Command at sea is a job like no other, where the ultimate responsibility rests with you alone,” she said.

As a bald eagle sailed through the skies overhead, the reading of orders and relief of command officialized the transition of power from Vermeer to Kent.

After the formalities were over and the cake cut, Lt. Kent appeared calm, an embodiment of the the Coast Guard’s motto, “Semper Paratus”, which translates to “always ready”.

Kent graduated from the Coast Guard Academy in 2013 and this will be her first time commanding a cutter, though she is armed with recent experience training future officers on the Eagle, a USGC tall ship, while it was in Baltimore.

Kent said she hoped to keep the positive reputation of the Anacapa alive and well, both in the community and within the Coast Guard.

Lt. Commander Peter Vermeer was ringed by friends and family, but took a second to reflect on what it was like to command the Anacapa, after completing his first tour on board as a petty officer, right here, seventeen years ago.

“It’s a pretty magical feeling to have started your career on one ship and then to mark a significant milestone of your career leaving that same ship,” said Vermeer.

The departing officer’s next stop is New London, Connecticut, where he’ll be stepping into the role of Assistant Director of Institutional Research for the Coast Guard facility there. It’s a chance to do the kind of analytical and applied work he’s come to enjoy, and take a break from worrying about a whole crew, in very cold water.

“I’ll be sorta sad to leave my leadership role here, but I’m certainly relieved to be taking care of me and mine,” said Vermeer.  “Maybe getting a little smarter and doing some interesting work that will hopefully help in a more broad way, the future leadership corps of the Coast Guard.”

While the command of Anacapa now rests in a new pair of capable hands, the future of the ship and the Coast Guard presence in Petersburg long term remains a question.

Nationwide, the Coast Guard is phasing out 110 foot island class cutters like the Anacapa and replacing them with larger Fast Response Cutters. Petersburg officials are hoping to convince the agency to keep a patrol boat stationed here.