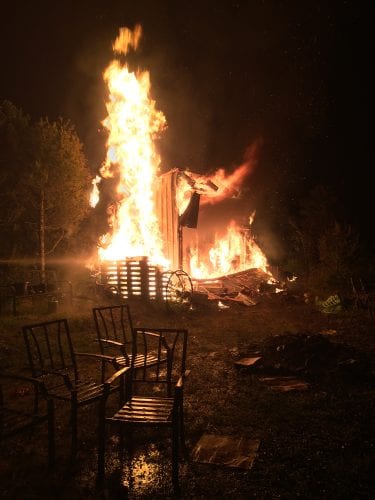 Fire destroyed a shed on Lake Street in Petersburg and may have started in a nearby smoke house.

Petersburg volunteer fire department spokesman Dave Berg said the call to police dispatch came in around 11 p.m. Tuesday. “The fire department responded with one engine and a crew and found a shed in the back of the yard of the house on Lake Street fully engulfed with flames,” Berg said. “And we deployed one attack line and made a hydrant connection and quickly knocked down the flames and within about 15 minutes had the fire completely under control and out. The resident reported that he had been smoking fish in an adjacent smoke house that apparently caused some transfer of flame or flame material to the shed that started it on fire when it was unattended.”

Lake Street is north of downtown behind Wrangell Avenue and near the Lighthouse Assembly of God Church. The shed and its contents are a total loss, that Berg guessed were worth around five thousand dollars. Some yard furniture was also damaged by the heat.

“It was a little exciting the resident did have some small propane cylinders in the shed that exploded initially when the structure caught on fire,” Berg said. “Fortunately there was no one around and no one was injured when those went off. I also wanna thank the nearby residents who responded with garden hoses to try and knock down the flames although they were quickly overcome by the amount of flame in the structure and we had to use our attack lines from the engines to put it out.”

The local fire marshal is investigating the cause of the blaze.