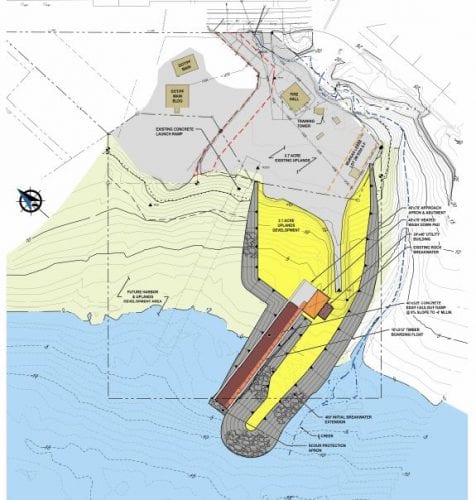 A conceptual design for a new ramp and breakwater at Scow Bay done by PND Engineers.

Petersburg voters will get to decide a wide range of issues this fall as the October borough ballot is taking shape this summer. Petersburg’s borough assembly Monday agreed to add several questions to the general election ballot and also let voters decide on two citizens’ initiatives.

Voters in October will be asked whether the borough should spend up to $500,000 from Petersburg’s economic development fund to go toward a boat haul out and work yard at Scow Bay. That money could be used to match any federal grant money the borough can secure for the first phase of improving the Scow Bay turnaround so that vessels can be pulled and serviced. Petersburg’s economic development fund was created with six and a half million dollars from the federal government to offset losses from the decline of the timber industry. At the end of June that fund had over four million dollars.

“This is exactly the sort of thing that that money was set aside for,” said Petersburg Economic Development Council member Brian Lynch. “And I think that any sort of improvement in infrastructure that benefits our fishing fleets is going to have great positive economic impact on this community. So hopefully you will approve that and hopefully the voters will approve it also.”

The PEDC has paid to study possible improvements on the Scow Bay land. The latest design has looked at constructing a better boat ramp and breakwater. Long-term the plans call for a wash-down pad for boats and space for private companies to do repair and maintenance work.

Petersburg’s assembly was supportive of the issue going on the ballot, with the exception of Bob Lynn. He was concerned that the project had no plan of operations spelling out who would be responsible for running the boat yard.

“We’re hand to mouth operation on our harbor fund, what we take in we spend,” Lynn said. “We don’t have a lot of excess reserve. If we go ahead and put this in and we have to add cost to this that means then does that come out of the general fund for the borough? Where does it come from? Are we going to put additional fees onto this to pay for the additional people?”

Lynn also thought there would be conflict between volunteers using the fire department’s facilities at Scow Bay and boat yard users if the haul out is developed.

The borough’s community and economic development director Liz Cabrera thought this vote would be a referendum on whether the PEDC should continue pursuing the project.

“We all know that engineering and design is very expensive,” Cabrera said. “We don’t wanna keep chasing the design and putting money into engineering and design if it’s just gonna fail at the ballot. So I guess we wanna know from the public locally are we going to be willing to put some money toward this and if the answer is yes, then I think that gives us more confidence to push forward with the engineering, gives us more confidence to say yeah this is what this development is gonna look like, this is what we’re envisioning and try to put something together to see if there’s the private sector interest.”

The vote was 4-1 with only Lynn opposing the issue going on the ballot. Assembly members Jeigh Stanton Gregor and Kurt Wohlhueter were not at the meeting. The assembly was unanimous in sending a property tax exemption question to voters. That will be on whether to continue with an exemption for buildings with a fire sprinkler system installed. That allowance has exempted two percent of a property’s value in the past and is no longer mandated by the state. This year it became optional.

The assembly also took no action on two citizens’ initiatives. Borough residents were successful in turning in enough signatures to force a vote on whether off-road vehicles should be allowed on most borough streets and whether the borough should end the practice of adding fluoride to the local water supply.

ATV supporter Richard Burke wanted to let the voters decide. “Out of respect for a number of the folks that signed the petition I’m asking today for the assembly to send this to the ballot,” Burke said. “It’ll make the town a better place but we can make those arguments in September.”

The assembly had the option of keeping those issues off the ballot by approving ordinances that do essentially the same thing. Assembly members took no action which means both fluoride and ATVs will be up for a vote in October. That’s in addition to a charter change that would impact the state-owned dock on Kupreanof and two sales tax exemption changes. The filing period for people interested in running for local office is also just around the corner. It starts July 25th and runs until August 22nd. The mayor’s seat, two assembly seats and many other spots on local boards and commissions will also be decided this fall.