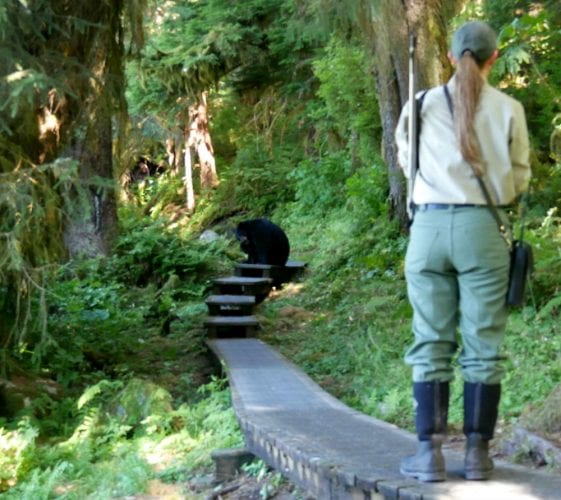 The Anan Wildlife Observatory near Wrangell is one of SE Alaska’s most prized bear viewing spots.

The US Forest Service recently finished some upgrades at the site that are designed to improve safety for the thousands of visitors who come from around the world for an up close encounter with both black and brown bears.

KFSK’s Nora Saks ventured out to Anan to see the changes first hand.

Kerry Klein leans against the railing of a wooden platform at the Anan Wildlife Observatory, laughing out loud at the black bear drama she’s spying on below.

“This baby, I think, is trying to learn how to get salmon. And instead of getting a live one, it waded in and got a dead one. And brought it up and is now chewing on the dead salmon that doesn’t look very appealing through my binoculars,” Klein said. “But it’s determined it’s going to feel proud of its catch there.”

Klein lives in Brooklyn. It’s her first time seeing bears like this, in the wild. She says her experience so far has been unbelievable.

“It’s very humbling. And, God, it makes me emotional to think about. How irrelevant we are here. That this is all going on in front of us. And we’re totally just witnesses to it,” said Klein. “For somebody from New York, where everything’s about people – this is not about us.” 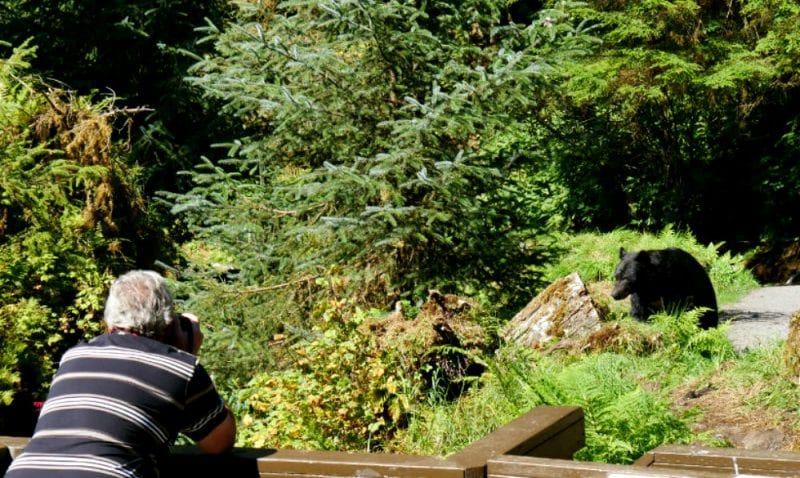 A visitor photographs a black bear from the viewing platform at Anan. [Photo – Joe Viechnicki]

At its heart, Anan is really about fish. The creek here is one the most productive salmon streams in the region. That abundance has attracted people for a long time — it’s been an important Tlingit cultural and fishing site for thousands of years – and it also attracts bears. Lots of them.

Forest Service staff estimate there are 50 to 60 black bears and around 15 to 20 brown bears that feast on the salmon banquet in the height of the season in July and August.

Now, the bears themselves are the major magnet. That’s because here at Anan, you don’t just watch bears eat and play and fight from a safe viewing deck perched high above the action. You also share the trail with them.

Just now, a juvenile black bear has decided to stop right in the middle of the path, a few yards away. It sits down and lazily scratches its cheek with a hind paw.

Luckily, the Forest Service’s site manager Trina Wade is at the front of the group. She sees this kind of ornery behavior on a daily basis.

“That’s their way of saying they’re submissive, but they don’t care,” Wade said.  “They do it to other bears too. They’re not really concerned about you.”

Her emphatic foot stomping, hand clapping, and firm instructions eventually convince it to continue on its way, and she never touches the shotgun she carries on her shoulder.

Over time, bears here have become habituated to human presence. Agency staff and tour operators teach visitors how to behave safely and predictably around bears. And they’ve got it pretty dialed in. There have been no major human-bear conflicts since the early 1990s.

Now, as Anan continues to grow in popularity, the Forest Service is less occupied with dangerous bear behavior, and more concerned with how to help humans from being a hazard to themselves.

This is evident in Phase 1 of the Master Plan, which was just completed. 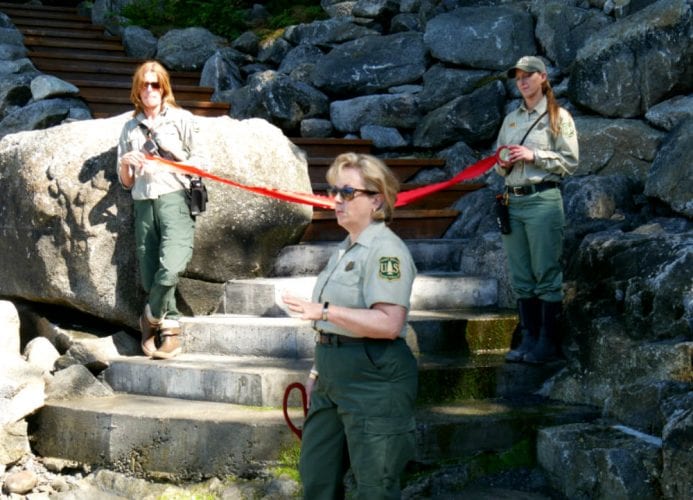 Some of the changes are subtle. But one obvious one is the toilet situation. Outdoor Recreation Planner Dee Galla has worked here for two decades. She remembers when one of the outhouses was tucked back in the woods, away from the main viewing platform.

“You had to leave the gate, and you’re walking, and that area right there where it crossed is one of the main avenues for the bears,” Galla said. “So we were always having bear encounters, and people would get stuck at the outhouse, for 15-20 minutes sometimes. And we’d have a little peephole, and they’d look out and wiggle their finger, and sometimes we’d have to wait.”

There’s a new outhouse up there now, built securely inside the protective railing, and a fancy double vault toilet near the trailhead, which doubles the old one’s capacity.

Sections of trail have been smoothed out and are now barrier free. And a new, wider bridge over the lagoon lookout point provides a safe place for folks to stop and take pictures without creating a bottleneck.

Wrangell District Ranger Bob Dalrymple and other agency officials were there for the ribbon cutting ceremony and the unveiling of all the upgrades.

With the agency’s budget on a relative decline, Dalrymple says that money for construction improvement projects like this one is especially tight.

“We competed for that funding against all the projects in the region and this just came up, it was our time I guess,” Dalrymple said.  “And it weighed out in the need for it and the benefit of it.”

With this project winning out, there isn’t money left for other recreation work on cabins or trails in the district, a sore spot with some locals and tour operators.

Anan is not a profit-making venture for the Forest Service. Since 2003, the number of visitors has been capped at 60 per day during the two month peak season. Each visitor permit costs $10. That permit revenue doesn’t come close to covering staff time or site upkeep. 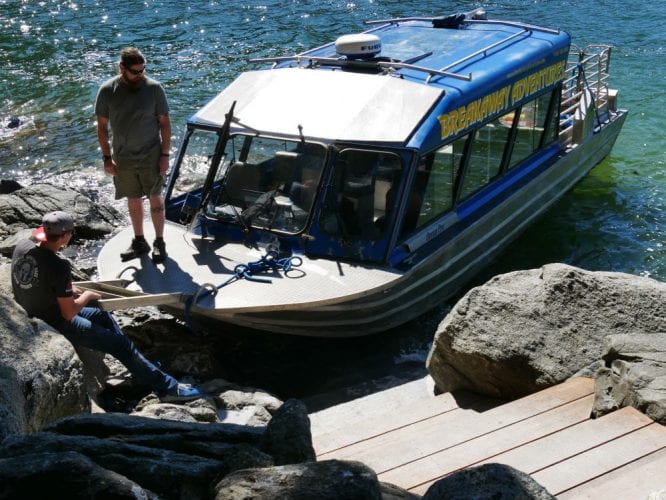 Tour operators from Breakaway Charters can now bring their boat right up to the new staircase, making access to the trailhead from the beach easier. [Photo – Joe Viechnicki]

But there is a spillover effect. Almost 3000 people visit Anan per year. Most of them are tourists, who pay hundreds of dollars to take a guided trip to this remote site, accessible only via boat or float plane. And then they spend more money in Wrangell.

“They estimate that people that actually go to Anan spend over $1000 dollars per person. That’s what they’re contributing to the economy,” Rushmore said.

A group of those international tourists are about to head back to town. They stride down a new staircase artfully laid into the rock formation and hop into their boat – one of the new improvements that makes access to the trailhead from the beach a lot easier.

Julia Horsburgh from Melbourne, Australia had these parting words.

The Forest Service plans to roll out more improvements over the next few years, as funding allows.